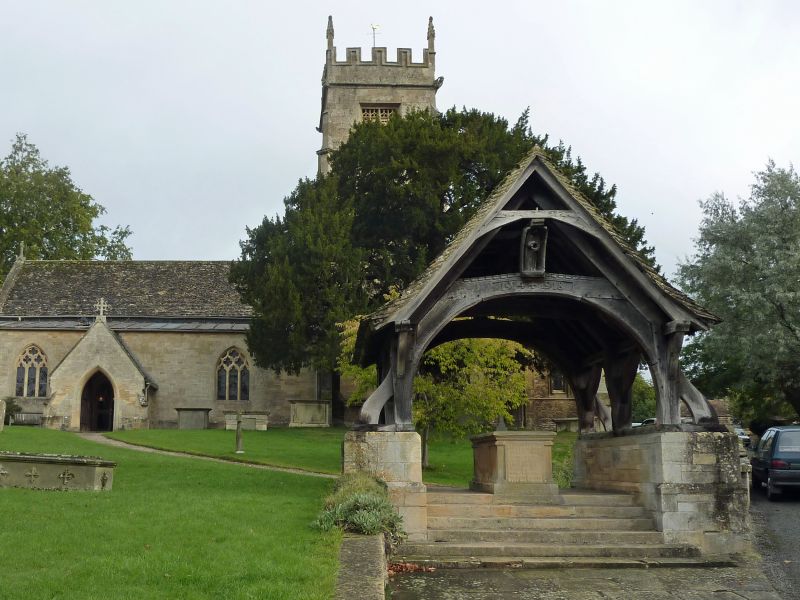 The large and imposing lych-gate stands to the south of the Church of St Faith (Grade I-listed), marking the entrance to the churchyard from Church Row. It forms a striking entrance from the lower street level beside a stream and chimes with the church porch and south front behind. The lych-gate is in close proximity to a number of Grade II-listed structures in the churchyard and on Church Row. Built in the English vernacular style, it comprises heavy timber framing on a limestone ashlar base, aligned longitudinally over the churchyard entrance. The tall chamfered base, with short returns at each end, encloses a stone and timber bench on the outside of the eastern wall, facing the street. There is no similar bench on the western side, inside the churchyard, which is at a higher level than the street.

The stone tiled roof has swept overhanging eaves on shaped brackets. Arch-braced collar trusses form round-headed archways, with additional, smaller, upper collars. The dates 1914 – 1918 are carved into the south collar, facing the street, and attached to it is the carved figure of an angel holding a wreath and set in a niche formed by its folded wings. Attached to the north collar is a carved angel with outspread wings. The eastern and western sides of the lych-gate each have a pair of large rectangular open panels, with reversed ogee braces in the upper corners. There are similar braces supporting the outer faces of the main posts.

On the south side, six stone steps lead up from street-level into the gate, whilst inside the churchyard the platform extends beyond the lych-gate, ending in a paved semicircle. Centred inside the gate, raised on the paved platform, a large coffin rest in the form of a chest tomb bears some of the inscriptions. The broad coffin rest is like the empty tomb of a cenotaph.

Inscriptions carved into the timbers include GLORY TO GOD IN THE HIGHEST AND ON EARTH, PEACE, GOODWILL TOWARDS MEN and THROUGH THE GATE OF DEATH WE PASS TO OUR JOYFUL RESURRECTION. The principal dedicatory inscription to the south face of the coffin rest reads REMEMBER THE/ OVERBURY AND/ CONDERTON MEN/ WHO GAVE THEIR/ LIVES IN THE/ GREAT WAR THAT/ HONOUR JUSTICE/ AND LOVE SHOULD/ RULE MANKIND/ SEE TO IT YE LIVING THAT YE HERE DEDICATE/ YOUR LIVES TO THE CAUSE FOR/ WHICH THEY DIED.

The north face of the coffin rest is carved with a quotation from William Blake’s poem ‘Jerusalem’, I WILL NOT CEASE/ FROM MENTAL FIGHT/ NOR SHALL MY SWORD/ SLEEP IN MY HAND/ TILL WE HAVE BUILT/ JERUSALEM/ IN ENGLANDS GREEN/ AND PLEASANT LAND. The commemorated names, with rank and regiment or unit, are incised into the east and west faces of the coffin rest. The names of those who died in the Second World War are recorded on a tablet in the lych-gate wall.

The aftermath of the First World War saw the biggest single wave of public commemoration ever with tens of thousands of memorials erected across England. This was the result of both the huge impact on communities of the loss of three quarters of a million British lives, and also the official policy of not repatriating the dead which meant that the memorials provided the main focus of the grief felt at this great loss. One such memorial, a lych-gate replacing an earlier structure in the churchyard, was raised at Overbury as a permanent testament to the sacrifice made by the members of the local community who lost their lives in the First World War.

The lych-gate was designed by Sir Herbert Baker FRIBA RA at the instruction of the Holland-Martins of Overbury Court: their 19 year-old son Geoffrey Holland-Martin had been killed in France in 1918, and has no known grave. The memorial, however, commemorates all 27 local servicemen who died in the First World War. It was unveiled and dedicated on 12 September 1921 by the Bishop of St Albans at a very well attended service and ceremony, during which Colonel Allen read out the commemorated names.

The oak for the lych-gate’s heavy timberwork, which has similarities to the framing in Baker’s war memorial cloister at Blackmoor (also 1921) (Grade II-listed), was harvested from woodland in Worcestershire: whilst the stone, from Bredon Hill, was given by Robert Holland-Martin. Tiles for the roof were reported to have been collected from old buildings in the village. The carved elements are by Alec Miller (1879-1961), who was Head of Modelling and Woodcarving at the Guild of Handicraft from 1902 to 1924.

Following the Second World War a plaque commemorating the names of four local servicemen who died in that conflict was added to the lych-gate.

Sir Herbert Baker FRIBA RA (1862-1946) was born, and died, in Cobham, his English home.  Articled to Arthur Baker in 1881, he was Assistant to Messrs Ernest George and Peto (1886-90) and attended the Royal Academy Schools. During the 1890s he was in South Africa, designing the Prime Ministerial residence ‘Groote Schuur’ and many private residences as well as government buildings following the South African union. From 1912 he collaborated with Sir Edwin Lutyens in India on New Dehli.  From 1917 to 1928 Baker was one of the Imperial (now Commonwealth) War Graves Commission principal architects, for whom he designed 113 cemeteries on the Western Front including Tyne Cot, the largest Commonwealth cemetery in the world.  He was also responsible for four Memorials to the Missing including those to the South Africans at Delville Wood and the Indians at Neuve Chapelle. He designed 24 war memorials in England.  During the inter-war years his work at home included South Africa House (Grade II*), Rhodes House (Grade II*) and, his last major public commission, the Bank of England (Grade I).

Overbury and Conderton War Memorial Lych-gate, which stands to the south of the Church of St Faith, is listed at Grade II* for the following principal reasons:
* Historic interest: as an eloquent witness to the tragic impact of world events on a family and the local community, and the sacrifice it has made in the conflicts of the C20;
* Architectural interest: an elaborate lych-gate incorporating timber sculptural elements and an unusually large coffin rest in the form of a chest tomb, reminiscent of the empty tomb of a cenotaph;
* Architect: by the nationally renowned architect Sir Herbert Baker FRIBA RA (1862-1946), who designed a number of memorials at home and abroad;
* Sculptor: with timber structural elements and carvings by Alec Miller (1879-1961);
* Design: the lych-gate draws on the Arts and Crafts emphasis on vernacular building traditions, with a strong visual and compositional association with the south front of the Church of St Faith;
* Group value: with the Church of St Faith (Grade I) and numerous Grade II-listed churchyard monuments and buildings in the environs.