A Grade I Listed Building in Tewkesbury, Worcestershire 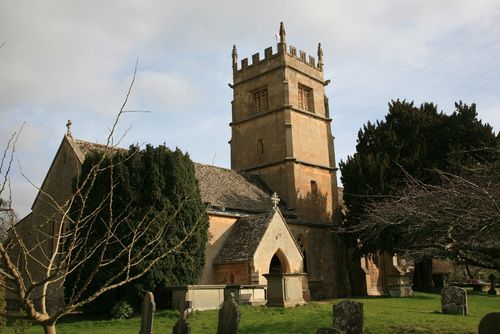 Nave: roof raised and aisles widened in C14 enclosing
clerestory windows with the new aisle roofs; angled buttresses with offsets at each
end and buttresses with offsets at bay divisions of north elevation. West end
has C19 exterior stonework, three large stepped lancets with a sill string and
a small louvred lancet in the gable apex. At the west end of each aisle is a
2-light C19 window. The north elevation has two 3-light C14 windows flanking
the north doorway which is pointed and hollow chamfered. At the east end is a
similar 3-light window and a doorway with a 4-centred head to the rood loft
stair. The two windows in the south elevation and that at the east end of the
south aisle are also of three lights but partly restored. The south porch is
C19, gabled and has diagonal buttresses, a pointed archway, a lancet in each
side elevation and stone benches within. The C12 south doorway has been reset
in the C14 wall. It is of three shafted orders, the outer orders have a roll
moulding and scalloped and voluted capitals of varying detail and the inner order
have colonnettes of simple detail. The central tower was rebuilt in the late C15.
It is of three stages with strings and a chamfered plinth. There are diagonal
corner buttresses with offsets, the south-west one has a curious carved reptile
on it, and in the north-west buttress is the door to the tower stairs. The
north and south elevations of the lower stage have 3-light windows and small
square-headed lights beneath the string (this string is carved with Tudor flowers
at intervals) and in the south elevation is a narrow pointed doorway with moulded
jambs. The second stage has a square-headed light in its west elevation. The
belfry stage has large square-headed bell chamber openings of four lights filled
with elaborate pierced stone tracery of probable C17 date. There are four gargoyles
at the corners of the parapet string; the parapet is embattled and has crocketted
corner pinnacles. Chancel: C13, altered C15 and has moulded plinth and sill string;
there are pilaster buttresses at the east end and also at the centre of the side
elevations. At each end of the side elevations are large C19 buttresses with off-
sets. The east window is C15 and of eight lights with a 4-centred head. Beneath
the sill string is an illegible memorial and in the gable apex are two rectangular
lights. The side elevations have a continuous hoodmould, string course just
below eaves level and two C13 lancets, each lancet is richly moulded and has nook
shafts with foliated capitals and moulded bases. There is a dovecote in the roof
access to which is provided by a small door beneath the eaves in the north
elevation.

INTERIOR: four-bay round-headed nave arcades of two orders with circular
columns; north arcade has square scalloped capitals and continuous simple
hoodmould with reset head stops, whilst the south arcade has similar capitals but
with a deep vertical face, horizontal flutes and an ornate continuous hoodmould.
Above each column and above the east respond are small clerestory windows, the
north-east one being partly obscured by the angle wall of the later rood stair
turret. The tower arches are of two orders in C15 style and spanning the lower
stage is a C19 quadripartite vault. The chancel has a C13 quadripartite vault
which has carved bosses and springs from attached vaulting shafts; the intermediate
shafts are in clusters of three and all have foliated capitals and moulded
bases. The sill strings are carried up vertically around the arches of the
vault to form the wall ribs. The nave has a C19 barrel roof. The mullions
of the east window continue below the sill to form a blind arcade with
quatrefoil tracery and the chancel windows also have nookshafts similar to those on
the exterior. The west window has detached chamfered shafts between the lights
with a filleted roll on each face and these are repeated on the jambs. The
font has a C12 bowl carved with panels representing a priest, bishop, a Latin
cross and dove and a scrolled foliated motif; the octagonal base is C14 and has
a ballflower decoration. The pulpit incorporates reused ornate woodwork from
the C15 rood screen and the nave pews have C15 traceried panels. There is a
medieval coffin lid in the north aisle and two medieval tiles set in a south
chancel window sill. Memorials: in the nave are two memorials to the Martin
family, one is late C18 by W Stephens, the other is early C19. In the north
aisle, two early C19 memorials, one to the Agge family surmounted by a grieving
woman by Cooke of London. There is also an C18 ledger slab to the Agge family
and in the south aisle are three other C18 ledger slabs to the Darke family,
one with reused ornate entablature and swan-neck pediment.

A substantial
medieval church with a particularly interesting and well-detailed Early English
chancel.