A Grade I Listed Building in Eastham, Worcestershire 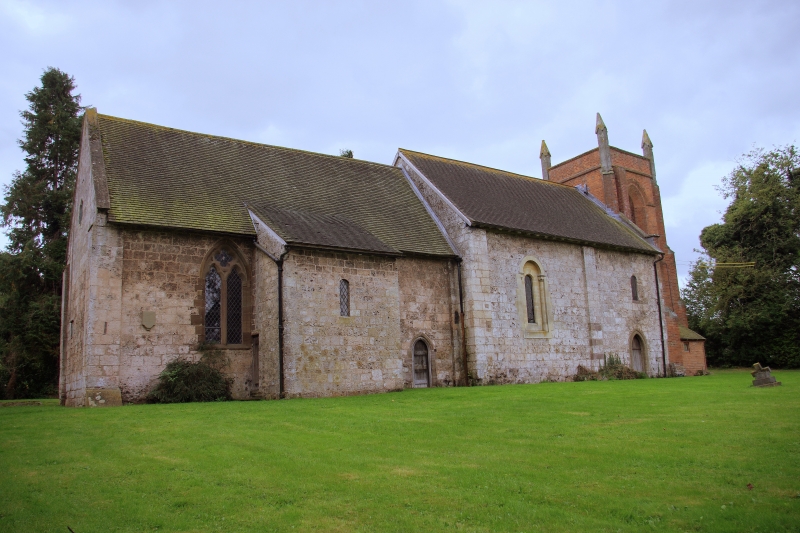 West tower:
rebuilt in brick in 1825; two stages divided by string; chamfered plinth
and corner buttresses with offsets, set diagonally at west end; lower
stage has pointed west doorway; belfry stage has large, louvred lancet
bell-chamber openings to all but east elevation and to which main string
forms a sill string; door and bell-chamber openings all have hood moulds
with returns which continue as a string to the corner buttresses;
buttresses terminate in tufa pinnacles between which runs a plain parapet
above a string. Lean-to addition to north elevation with square north
light and pointed doorway in west side. Nave: C12; central and east end
pilaster buttresses and opposing doorways; west wall rebuilt 1825 and
has diagonal corner buttresses with offsets; north elevation has a C19
easternmost window in Norman style and the door in the western bay is C14,
pointed with continuous bowtell fillet edge moulding; above it is a small
C12 light; south elevation has a 2-light C14 window in its east bay and a
C19 cusped lancet in its west bay; both windows have hood moulds with
returns. To the right of the west window is a pedimented wall memorial
with an illegible inscription. The south doorway projects between slender
pilaster buttresses and has a round arch of two orders enriched with incised
lines and lozenges; the shafts beneath have cushion capitals and moulded
bases and above the doorway is a blind arcade of four intersecting round
arches with circular shafts and an enriched string beneath; (there are
several similar doorways of contemporary date in the region [Pevsner]);
east of the door are set two carved panels of Leo and Sagittarius, now
barely discernible. Chancel: C12 extended in C14; east end has clasping
pilaster buttresses, a C19 sexfoil light in gable apex and a late C18
wall memorial to the Griffin family; side elevations have 2-light C14
easternmost windows and large central C12 single-light windows; at west
end of north elevation is a pointed doorway and small C12 light and at west
end of south elevation is a narrow rectangular light; between the two
easternmost windows in the north elevation is a C19 lean-to vestry; it
has a round-headed light in its north elevation and a small east doorway
adjacent to the chancel.

INTERIOR: C19 round-headed chancel arch with
shafted jambs; moulded bases of former chancel arch visible through gaps
let into floor; rood loft stair to left with doorway at top of stairs now
glazed; to right of chancel arch are two carvings in low relief, an Agnus
Dei and a lion with two bodies (similar to that at St Andrews, Stockton
on Teme [qv]). Nave and chancel have ashlared arch-braced collar rafter
roofs, the nave roof is strengthened by three tie beams of possible C14
date. Chancel has a C14 piscina with cusped head in east jamb of south-
east window and there is a simple aumbry at the centre of both side eleva-
tions. Reredos made up of elaborate mid-C17 panels with blind arcading
divided by six figures in high relief; C16 panelling incorporated in choir
stalls and priest's desk; also C17 priest's chair. Font: C12, large sandstone
circular example with wide fillet near upper edge and cable mould at junction
of base and stem. Octagonal pulpit made up of C17 panels. Lectern on C16
carved and turned stem with four lion's feet at base. C18 parish chest in
north-west nave.
Memorials: chancel has a late C17 painted cartouche surmounted by a coat of
arms to Edward Soly, died 1690, another cartouche to Josiah Shelton died 1749,
a mid- and a late C18 brass, memorial in painted stone surrounds, and also
another late C18 and several early C19 memorials. In 1816 the church is
recorded as having had paintings of Moses and the Ten Commandments on the
east wall.

This medieval church retains several original features of
particular interest and has some fine C16 and C17 woodwork.