A Grade I Listed Building in Huddington, Worcestershire 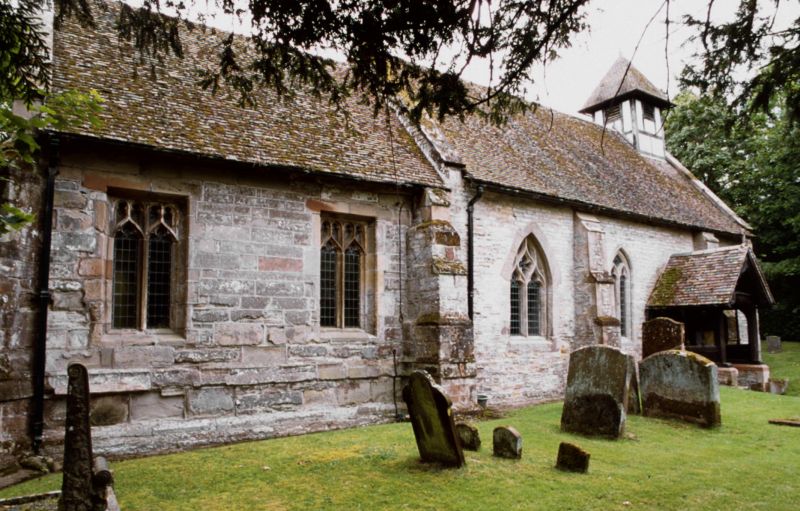 Nave: C12 masonry in north and south walls, west
end either rebuilt or refaced; north elevation has two buttresses with off-
sets; west end has a 2-light C14 window and there are two similar windows
in the north elevation and one in the south elevation; the east window of
the north elevation has C19 tracery; at the west end of the north elevation
is a C12 lancet; to the left of it is the C12 round-headed doorway which
has a similar smaller opposing door in the south elevation; the jambs of
both doors were chamfered in C14. The small bell turret has rendered infill
and square 2-light louvred bell chamber openings; the pyramidal roof above
has broad eaves and a cast-iron cross finial. The south aisle is of two bays
with a separate roof and was added in C14; the east end window is C14 and the
south and west windows are both C16 and square headed; all are of two lights;
there is a stone chimney with off-sets at the junction of aisle and chancel.
The north porch is C16, gabled and timber-framed on low C19 lias limestone
side walls; the posts and tie beams of outer and inner gables are moulded and
chamfered to form an ogee arch; the outer tie beam is brattished and above
the bargeboards form a cinquefoiled arch with an ogee head; the open sides
of the porch are divided by three moulded wood shafts and, above, the wall-
plates are also moulded. Chancel: rebuilt late C15; faced with sandstone
ashlar with a chamfered plinth, two diagonal buttresses with off-sets at the
east end and a buttress with off-sets at the junction with the nave on the
north side; 3-light east window and two square-headed 2-light windows in
north and south elevations; the south elevation has a central blocked
doorway with a 4-centred head and hoodmould with foliated stops.

INTERIOR:
two-bay south arcade, C14 and possibly recut C17; piers are quatrefoil in
section with hollowed re-entrant angles, moulded capitals and pointed arches
are of two moulded orders. C16 wagon roofs, formerly plastered. Chancel
has a defaced image niche surmounted by a shield either side of the altar;
pointed-arched piscina supported on pilaster with chamfered angles; C17 altar
table with spiral legs, mid-C17 altar rails and panelling made from former
box pews; choir stalls are c1520 with linenfold panels. Jacobean rood screen
with brattished rood beam and widely-spaced balusters; pews are probably C17;
octagonal font with moulded base. South aisle has C15 tiles set on west wall,
a blocked piscina in the south wall, an image bracket on the east wall, a C17
altar table and two parish chests, one of which is decoratively carved and
probably late medieval. Memorials: in the south aisle is a wall memorial
in black and white marble to Sir George Wintour, died 1658, with Corinthian
columns and a coat of arms; in the chancel is a brass inscription tablet
to Adrian Fortescue, died 1653, in a C20 wooden surround. Glass: south and
west aisle windows contain fragments of C15 and C16 heraldic glass; east window
of chancel has a restored Crucifixus with the Virgin and St John of the early
C16. A small medieval church containing some good C17 fittings and C15 tiles.