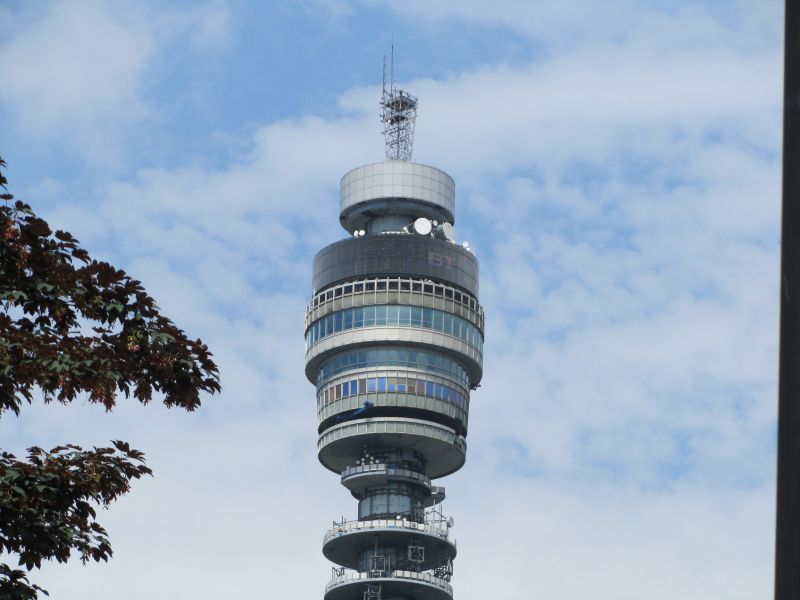 Sleek reinforced concrete cylinder, board mark finished to lower 130 feet and 582 feet high, with 40ft mast on top. Reinforced concrete floors. Deep raft foundations. Central chimney like shaft of reinforced concrete, the upper section 22ft in diameter and with walls one foot thick, tapering outwards to 35ft external diameter at base with 2ft thick walls. The lower seventeen floors of equipment rooms, ventilation plant and offices clad in triple curtain wall comprised externally of stainless steel glazed with Antisun glass. 103 feet of hospitality floors at top of tower, on six levels, originally with observation floors, restaurant and kitchen, and with three further storeys housing plant room above. The aerials and dishes had to be mounted between 365 and 475 feet to achieve adequate ground and obstacle clearance, and were mounted on circular galleries to give the maximum flexibility for adjustment and for subsequent new equipment. The circular shape dictated by the aerials has been retained in the remainder of the tower, to maintain consistency of form and to provide minimum wind resistance. Because of the building's taper the lower five floors are substantially smaller. Ground floor entrance on Maple Street leads to tower foyer, with exhibition space on concave link floor above. Lift lobbies lead to 65ft diameter restaurant floor which originally revolved once every 25 minutes, with former cocktail lounge and weather station above. The building, originally with public access to galleries and restaurant, now serves only BT's guests. The interiors have been entirely refurbished. The telecommunications and servicing equipment is not included in the listing.

The BT Tower was built as a centre of national and international telephone communication by ultra high frequency (UHF) microwave transmission. The site was chosen at the rear of the Museum Telephone Exchange, because this exchange was already the focal point of the telecommunications system and the vision cables network for London, with cable connection to Broadcasting House (q.v, City of Westminster). However, as telephone use soared in the 1950s, and was correctly predicted to increase still more quickly in the 1960s, it became increasingly difficult to provide adequate cable links in central London. Radio telephones using low frequencies had long been used, but the use of high frequencies was in its infancy, and this commitment to the use of high frequencies on a potentially massive scale placed the tower at the forefront of international design. 'It will represent a considerable advance on any existing international centre' (Institution of Civil Engineers, 1965, p.33). The sensitive equipment meant that the tower had to be exceptionally stable to maintain the accuracy of the narrow beam transmitters. By means of tests in the National Physical Laboratory wind tunnel, it was stiffened so as to deflect only eleven inches in a hundred mile an hour gale. The cylindrical shape reduced wind resistance.

The height was raised to over 580 feet as building commenced, in order that the tower should be taller than the office buildings then being erected in London. Its waves were relayed across Britain via a series of masts, the nearest being at Harrow. The design was carefully considered for its elegance. 'The massing is a very welcome addition to the urban landscape' (Architects' Journal, 22 June 1966, p.1543). The design to include restaurant facilities was made only in mid-1961, and is part of a movement across North America and central Europe in favour of landmark restaurants connected with radio masts. However, the comparable, slightly earlier towers at Dortmund, Stuttgart and Vienna were only television transmitters, and the Space Needle at the Seattle World's Fair (opened 1962) was principally a place of entertainment. The restaurant and observatory floors give stability to the structure, and raised the Post Office's image when first built. The observation floors were closed to the public in 1971, and the restaurant in 1980.

The Telecom Tower was originally known as the Museum Radio Tower, and subsequently the Post Office Tower and Telecom Tower.