Church of St Stephen and All Martyrs 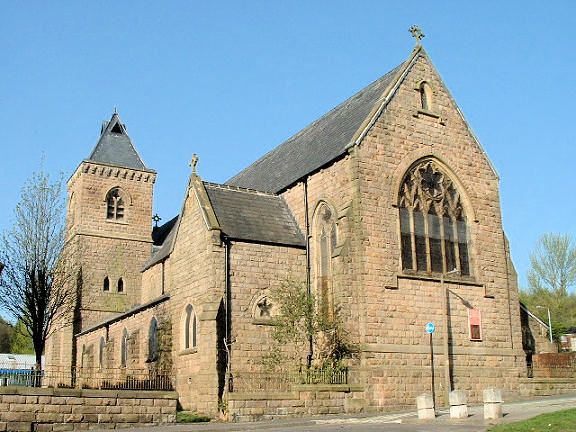 Entry Name: Church of St Stephen and All Martyrs

Church. 1873. By Mitchell of Oldham. Rock-faced ashlar with ashlar dressings and slate roofs with stone-coped gables with finials. Early decorated style with buttresses and diagonal buttresses, some with set-offs. Nave and chancel in one. North transept, aisles and south west tower. East end has 5-light window with a tall 2-light window to either side in chancel. Clerestory is of triple lancets under basket arches. North aisle has north door in gabled porch and 2-light windows with Y-tracery and quatrefoils. Low 3-light window at east end. South transept has cinquefoil window to east and, to south, a 2-light window with Y tracery similar to the windows of the aisle which links it to the tower. Clerestory windows above the aisle. 3-stage tower has diagonal buttress with set-offs in south-east corner and a stair turret to south west corner. 2-light window to south in 1st stage then small lancets all round above with a 2-light louvred window to top stage which has an arcaded corbel table. Pyramid slate roof with louvred gablets just below the apex. West end has tall 4-light window.
INTERIOR. The long high nave and chancel in one has roof of alternating scissor braced and arched braced trusses, the latter with the braces rising from carved stone corbels and having trefoils in the spandrels under the collars. A more elaborately cusped and carved truss marks the chancel. East window by Percy Bacon and Bros., London, of 1907, has 16th century style stained glass and aisle windows have stained or patterned coloured glass. A south aisle window by Capronnier is a memorial to Sarah Ann Orton, wife of the first vicar of the parish, and a figure is a portrait of her.
Carved choir stalls, pews, some fittings brought in. Reredos in chancel and another to west end, the latter brought in.
This church was carefully designed to take advantage of the sloping site with tower and transept placed to south. The long nave and chancel in one produces an impressive interior.