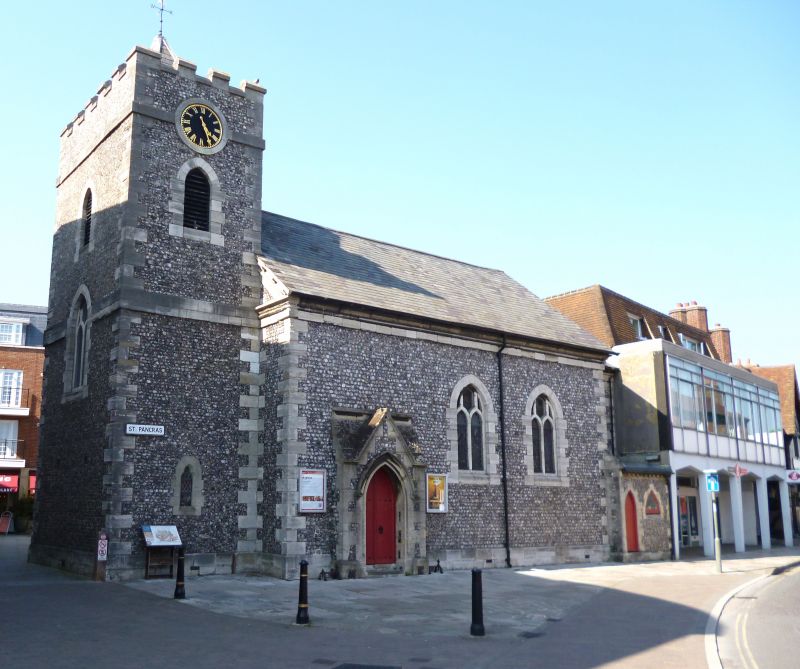 GII
1750 probably by William Ride.N aisle added and the church much restored in 1868-9 by Gordon M.Hills.Parish rooms added c1990.MATERIALS:Knapped flint with freestone dressings.Slate roofs.PLAN:Nave,small chancel,W tower,N aisle,SE vestry and shallow S porch.EXTERIOR:This small church has no churchyard and is surrounded directly by streets and other buildings.It has an unbuttressed nave which shows evidence of both Classical and Gothic work.The former is clear in the Classical pediment with stone dentils in the W return(before it is interrupted by the tower)while the latter is evident in the two uncusped three-light windows in Perpendicular style E of the small S porch.The chancel has a hipped roof and oculus window on the S side.The SE vestry has a plain arched doorway and small window alongside with timber Y tracery.The W tower is small and low and has no buttresses.It is of two stages,has an embattled parapet,plat bands,low pyramidal roof,and a W window similar to those on the S elevation of the nave.The belfry windows are large lancets and there is a clock face in a circular stone frame on the S side above the belfry window.The tower has a very wide projecting NE stair turret that may be a later addition.The aisle has Decorated style windows and is partly concealed by the parish rooms block.INTERIOR:The interior is almost wholly the result of the 1868-9 activity,including the tower arch and the chancel arch with its shafts with ring mouldings.The two-bayarcade is of the same date and has arches with a chamfer and in the soffit a roll moulding.The piers are of unusual section with a flat side N and S and semi-circular responds with moulded capitals in the E-W directions.In the chancel there is a C19 flat boarded ceiling with canted sides,divided into panels by moulded ribs.The nave roof may preserve something of the C18 construction(classical queen posts)but remodelled in the 1860s with moulded tie-beams on arch braces and pierced tracery decoration.The walls are plastered and whitened.PRINCIPAL FIXTURES:There is a W gallery of 1869.The reredos is of 1900 with a painted HIS monogram in a timber frame and is gabled in the centre and has panels with the Creed, Lord's Prayer and Ten Commandments in the flanking panels.There is C18 painted armorial glass in the two S windows by Tremaine.It depicts the arms of the two principal benefactors of the new church (see History below) and the bishop at the time.The seating, installed in 1868, has been replaced by chairs since 1985.HISTORY:The medieval church on this site was just outside the medieval town walls.It was destroyed by artillery during the Civil War siege at Christmas 1642 and for over a century the parish was without a church.The present building was erected in 1750 by William Ride according to the design already settled upon.Ride was surveyor to the duke of Richmond whose seat was at Goodwood nearby and who was among the chief subscribers to the new church.He contributed £105,a sum exceeded by the £400 contributed by Mary,countess of Derby.If Ride was the designer as well as supervisor of the church,St Pancras seems to be his only known church building.Ride was born c1723.He was employed as a surveyor by a number of noblemen from the 1750s until his death in May 1778.The 1868-9 addition and remodelling was the work of Gordon M Hills(1826-95)and increased the seating from 134 to 314.Hills served his articles in Southampton and became managing assistant to the famous London church architect R C Carpenter from 1850.He commenced practice in 1854 and became diocesan surveyor to London, Rochester and St Albans.SOURCES:Howard Colvin,A Biographical Dictionary of British Architects 1600-1840,3rd ed.1995,p 817.Ian Nairn and Nikolaus Pevsner,The Buildings of England:Sussex,1965,p 171.Incorporated Church Building Society records,Lambeth Place library,file 6771.West Sussex Record Office,PAR/42/4/11 (for appointment of Ride).Antonia Brodie et al.,Directory of British Architects 1834-1914,vol 1,2001,pp 915-16.REASONS FOR DESIGNATION:
The church of St Pancras,Chichester is designated at Grade II for the following principal reason:*It is a small town church built in the mid-C18,extensively altered and extended in the mid-C19.*Its unusual history of Civil War destruction,Georgian rebuilding and Victorian embellishment.*Its combination of classicism with Gothic touches,executed in characteristic Sussex materials.