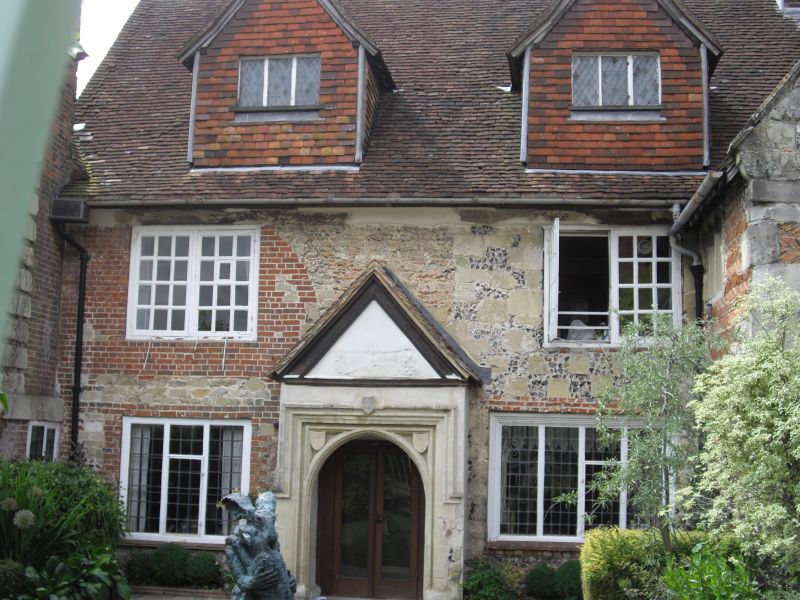 THE CLOSE
1.
1954
Nos 56A & 56B
(Hemingsby House)
[Formerly listed as No 56
(Hungerford Chantry)]
SU 1429 NW 3/16 28.2.52.
I GV
2.
(Former Canonry). Probably 1st built early C14 by Alexander de Hemingsby.
Enlarged C15, and enriched with panelling etc. about same time. Half of house
rebuilt 1726-7. External appearance now like 2 houses, each of 2 storeys.
The right hand part C14 and C15, and some slight modernisation, flint and
stone, with a number of flat tiles laid herring fashion in parts of the walls,
a projecting gabled wing at right hand corner with a large moulded stone pointed
arched doorway on ground floor, now blocked, and a stone mullioned window
over on 1st floor. The south wall of this wing is entirely of tile herringbone
with 3 light renewed stone mullioned window.
The main front has 2 gabled dormers with modern lead casements and tile hung
cheeks, 2 2-light stone mullioned casements on 1st floor, 2 similar on ground
floor and central ledged door (probably C14) with moulded cover fillets to
junctions of boards, in C14 or C15 gabled stone porch with moulded coping,
pointed moulded arched entrance with shields set in spandrels. This porch
possibly reset, the right hand wing was perhaps original entrance to hall
behind. Steep pitch gable end old tile roof to this part. The upper part
of this block was formerly one large hall with a small room in the wing.
The major part of the large room is in original condition with open timber
roof, the north end has been partitioned off to form an additional room at
a later date.
Roof with collar beams on arched braces and 4 tiers of single cusped windbraces,
principals single-cusped above collars. Wall plate with quatrefoils and inscription
with the name of William Fideon, a Greek Scholar who escaped from Constantinople
in 1453. He was Canon from 1457 to 1473. Reset C17 stair leads down to lower
ground floor where the hall screen has been reset, 2 pointed entrances with
delicate shafts and buttress shafts, carved finials. The linen fold panelling
reset in later part of house, No 56B, probably put in by Fideon or Canon Nicholas
Upton who enlarged the building 1445 to 1457. Canon Edward Powell, advocate
of Catherine of Aragon and later hanged for denying the Act of Supremacy,
lived here.
The left hand part of house, No 56B, part rebuilt 1726 by Canon Joseph Sayer
has #pper part of red brick with even chamfered stone quoins. Moulded stone
cornice and frieze. Tall brick parapet with flanking stone-pilasters and
stone coping containing 5 recessed panels over windows and door. The semi
basement has older masonry in walling as do south and west sides, and is separated
from upper brick part by stone band. 4 tall recessed sashes with flat rubbed
arches, triple keystones and large central door of 8 fielded panels with arched
radiating fanlight, in banded and chamfered stone surround, all on raised
ground floor. The semi-basement has 4 blind windows. The door is approached
by flight of steps with plain wrought iron rails.
The west front to garden has modillion eaves cornice and hipped old tile roof.
4 windows and glazed and panelled central door on 1st floor with dogleg Cl9
iron stairs with delicate balustrade giving access to garden. Ground floor
has 4 squat sash windows. The earlier part No 56A on this front altered fenestration,
gabled dormer, but retains stone buttress. The interior of No 56B has suite
of 4 large finely proportioned rooms, 1726, bedroom with reset very fine linenfold
panelling from floor to ceiling, also in other rooms as dado panelling. This
part has large stone cellars to east side, some reused mediaeval masonry.
House set back with small formal garden to front and large garden down to
river behind.