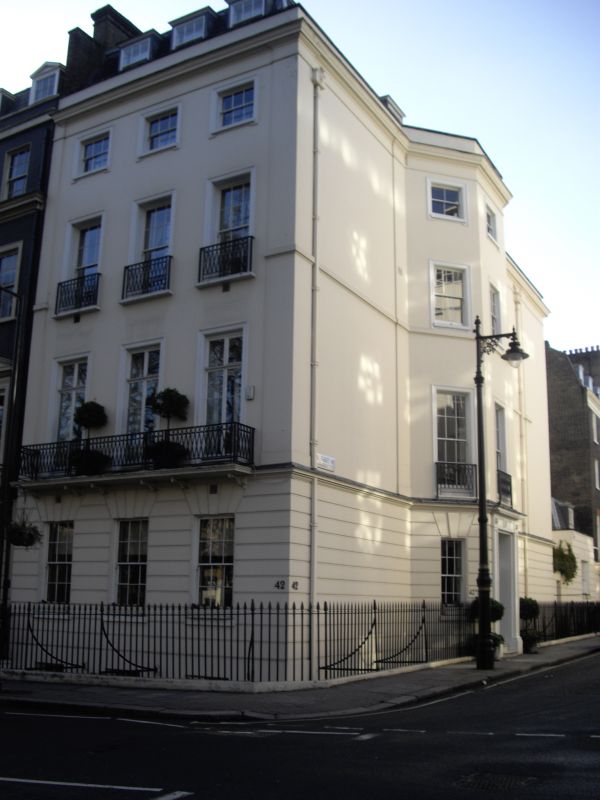 EXTERIOR: Stuccoed brick with slated modern mansard roof and dormers. Four storeys above basement with modern mansard attic. Banded rustication to ground floor continuing along elevation of rear service building and linking wall. French windows to first floor; remainder are sashes, mostly modern replacements. Moulded cornice and parapet. Modern mansard attic. E elevation to Berkeley Square has 3 windows; those above ground floor with moulded architraves. Bracketed stone balcony to first floor with wrought-iron balustrade; window-guards to second-floor in same geometric pattern. Shallow pilaster to left hand side and to angle. Return elevation has moulded string course above ground floor and plain one above the first. This elevation is blind up to entrance bay, which is full-height and canted with 3 windows. Neo-classical doorcase with sunk-panelled jambs and lion masks to corners, patera to frieze and cornice with guttae. Timber panelled door with patterned fanlight above. Window guards to first-floor windows. One window to right of entrance bay. The end section of this elevation, beyond the shallow pilaster, appears to be an early-C19 extension. It has a full-height canted bay to the rear with tall casements to first floor and window guards, similar to other elevations. Cast-iron area railings.

INTERIOR: There is little that can be confidently dated to the 1740s. A ground-floor room may retain elements of a panelled scheme with an enriched doorcase and modillion cornice, but the eclectic detail of this room (such as the C17-style plaster ceiling) suggest that it may date from the late-C19 or early-C20. Elegant late-C18 open-well stair on trapezoid plan with wrought-iron balustrade and unusual reeded mahogany. Oval lantern above with enriched surround. First-floor stair landing has doors with architraves and a niche cupboard with moulded surround in late-C18 style. A late-C18 marble neo-classical chimneypiece survives, but much of the décor throughout, including cornices, door architraves and dados, is c1985 and is not of special interest.

SUBSIDIARY FEATURES: Rear service building of one-storey and basement, with tripartite sash windows, probably late-C18. This may date from late-C18, but has been altered with a c1985 mansard as is principally of group value.

HISTORY: In 1696, the third Lord Berkeley sold his house, Berkeley House in Piccadilly, to the first Duke of Devonshire, with a covenant to protect the northward view from the house (thence named Devonshire House). The 4th Lord Berkeley, honouring the covenant, developed houses along the east side from c1738, first named Berkeley Row, and the 5th Lord granted leases for the west side in 1741-45 which was described as being part of a 'new intended square called Berkeley Square'. Rocque's map of 1746 names it as Berkeley Square. The principal developers were carpenters Edward Cock and Francis Hillyard. The gardens to Devonshire House on the south side became the gardens of Robert Adam's Shelburne, later Lansdowne House, 1762-8. The north side was gradually built with terraced houses by the Grosvenor Estate The gardens of Lansdowne House to the south were developed in the 1930s, forming the south return of the square.

REASON FOR DESIGNATION: No. 42 Berkeley Square is designated for the following principal reasons:
* Of special architectural interest as a substantial Mayfair townhouse of the mid-C18, remodelled in the neo-classical style in the late-C18 and retaining a good stair from that period, as well as some features including possible 1740s remnants incorporated in an early-C20 decorative scheme;
* Group value with Nos 43-47 and 49-50 Grosvenor Square (qv), the most intact C18 terrace remaining in the square.