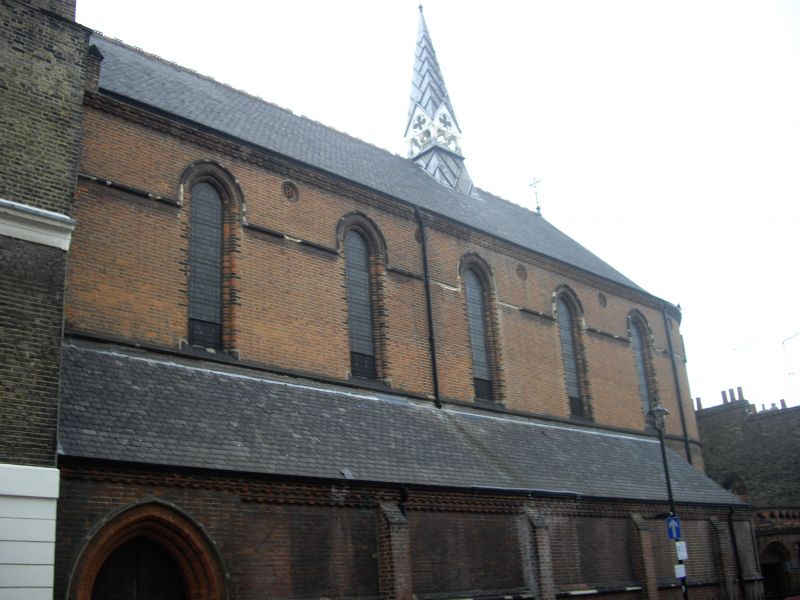 PLAN: The main church comprises a five-bay aisled nave with semicircular apse; to the north is a polygonal entrance porch (with a choir room above accessed via a stair turret) leading to large side-chapel open to the north aisle.

EXTERIOR: The main church, visible only on its south elevation to Graham Street, is in the stripped-down early Gothic style associated with James Brooks. It has low windowless aisles, a very tall clerestorey with elongated lancet windows, and a steeply-pitched roof surmounted by a pyramidal timber and lead fleche with pierced quatrefoils. The 1924 entrance porch is an irregular seven-sided polygon at ground level and a regular nonagon above, the transition mediated by a complex arrangement of stepped buttresses, corbels and offsets. The windows are paired lancets with moulded brick mullions and stone transoms. The rest of the 1924 extension is largely hidden from public view; its principal external features are the octagonal stair turret leading to the upper choir room, and the west window of the Seven Sorrows Chapel, composed of five stepped lancets under a retaining arch.

INTERIORS: Withers' church consists of a high, broad nave separated from the narrow aisles by five-bay arcades of shaped brick set upon cylindrical stone piers with carved capitals; these continue around the semicircular apse as blind arches on brick piers. The clerestorey windows are tall single lancets containing plain leaded glass, with stone heads connected by a continuous stencilled band and projecting moulding, above which are two broad bands of decorative brickwork with small open roundels. The nave roof is a boarded timber keel-vault, with slender ribs and iron tie-rods. The aisles have lean-to roofs resting on brick half-arches; those to the north are now carried on the chamfered granite piers of Goodhart-Rendel's outer arcade.

Beyond this is the Seven Sorrows Chapel, whose north wall has blind arches matching the arcade to the south, and whose roof is a concrete keel-vault reflecting that in the nave. The west window is of five stepped lancets, and the east window a simple oculus. West of the chapel is a vestibule, its north wall treated as a low segmental arcade on heavy granite corbels, with a tiny passage-aisle behind and a miniature clerestorey above. This in turn connects to the porch, an irregular seven-sided space with a brick rib-vault carried on granite corbels and relieving arches.

FIXTURES AND FITTINGS: The present fittings are a distinguished set reflecting the classicising Anglo-Catholic tastes of the late C19 and C20. They include:

* Paintings in the arcade spandrels, 1895-6, by Nathaniel Westlake: angels and Old Testament figures in an Italian High Renaissance style.
* Organ case and gallery, 1908, by Sidney Gambier Parry: in an English Baroque style with segmental and broken pediments, scrollwork carving and urn and angel finials.
* Reredos and high altar, originally 1908 by Gambier Parry, altered in 1919 by Travers, and in 1934 by Goodhart-Rendel: crucifixion sculpture under a gilded canopy with fluted pilasters and scrolled volutes, the entablature above surmounted by tall finials and a cartouche of the Coronation of the Virgin.
* High altar, 1919, by Martin Travers: a gilded sarcophagus bearing the paschal lamb amid a sunburst, with curved gradines enclosing a tabernacle in the form of a miniature domed temple. (A number of elaborate candlesticks, also designed by Travers, stand on or about the altar, which is normally adorned with a Travers-designed silk frontal.)
* Statue of Our Lady Queen of Peace, now in Seven Sorrows Chapel, 1920, by Travers: Virgin and Child, based on a medieval statue at Amiens, in front of a gilded sunburst.
* Altar and reredos in Seven Sorrows Chapel, 1929, by Goodhart-Rendel, with paintings by Colin Gill: the frame has twisted colonettes, cusped canopies and an embattled top rail; the altar slab beneath rests on square piers with quasi-Byzantine decoration. The altar-rails have a honeycomb pattern of hexagons in roundels.
* Altar and tabernacle in south aisle, 1929, by Goodhart-Rendel: the tabernacle is in a Gothic/Byzantine style, its canopy taking the form of a saucer dome with tiers of miniature windows and much polychromatic decoration; the angular stone altar beneath is severely Modernist.
* Confessional in Seven Sorrows Chapel, 1936, by Goodhart-Rendel: timber 'cabin' with zigzag-patterned colonettes rising to corner tourelles under tiny conical roofs.
* Font beneath organ gallery, uncertain date, by J Harold Gibbons: square stone bowl with scrolled carving; gilded timber canopy with Gothic-Rococo ornament and pelican finial.
* Pulpit in nave, 1972, by Laurence King: C18 style, octagonal, side panels with gilded armorial cartouches and turned balusters, large tester above.
* Columbarium in vestibule, 1999, by Roderick Gradidge, with paintings by Anthony Ballantyne and Christopher Boulter: small domed chamber framed by gilded timber columns and lined with 'rusticated' hardwood panelling; glazed recess containing reliquary; tympana painted with stylised scenes of the resurrection.
* Glass: mostly plain, with post-war coloured glass in the apse; the two stained-glass windows are in the central lancet at the west end (SS George and Edward, 1897, by Mary Lowndes) and the oculus in the Seven Sorrows Chapel (emblems of the Virgin, 1955, by Margaret Edith Rope).

SUBSIDIARY FEATURES: Behind the Seven Sorrows Chapel is a vestry of uncertain (probably late-C19) date, with curious applied wall decoration in an 'artisan mannerist' style, a very large wooden altarpiece with overhanging canopy, and three small stained glass windows with emblems relating to the Eucharist, the Sacred Heart and the Virgin Mary.

HISTORY: The church was founded in 1874 as a chapel of ease to St Paul's, Knightsbridge, intended for use by the large servant population of Pimlico and Belgravia. In the event it became equally fashionable with the wealthier residents of the district, allowing for the gradual enlargement and embellishment of the building through the late C19 and C20. A noted centre of Anglo-Catholic worship associated with the Society of St Peter and St Paul and the Anglo-Catholic Congress movement, the parish was a key sponsor of the 1921-7 'Malines Conversations', a series of talks between senior Anglicans and Roman Catholics aiming at the reunion of the two churches.

Robert Jewell Withers (1823-94) worked at Sherborne in Dorset and (from 1851) in London, where he developed a sizeable practice based mainly on church work. He restored built or restored a number of churches in England including Gibbs' St Mary le Strand (1870), but his most noted works are in south Wales, including St Peter's Church at Lampeter and the Cardigan Guildhall.

Martin Travers (1886-1948) was one of the C20's leading designers of church furnishings. Although he collaborated on the design of a number of buildings, he never formally qualified as an architect; instead he devoted his career to the design of ecclesiastical furnishings and stained glass becoming the acknowledged master of the 'Back to Baroque' style associated with the inter-war Anglo-Catholic Congress movement. Apart from St Mary's, his principal works include the reordering of Wren's St Magnus Martyr in the City of London (1921-4), and the immense reredos at Butterfield's St Augustine, Queen's Gate in Kensington (1928).

Harry Stuart Goodhart-Rendel (1887-1959) was a key figure in both the 'traditionalist' school of C20 century British architecture and the post-war revival of interest in Victorian design. An Anglican by upbringing and a Roman Catholic by conversion, he did much work for both churches, whether in the Arts and Crafts Gothic manner of Holy Trinity, St Leonards-on-Sea (1945-54) or the Byzantine-Romanesque style of Holy Trinity, Bermondsey (1951-60). He was president of the Architectural Association in 1924-5, Slade Professor of Fine Art at Oxford in 1933-6, and president of the Royal Institute of British Architects in 1937-9. In 1958 he became a founder member of the Victorian Society, reflecting a lifetime's study and admiration of the architecture of the C19.

REASONS FOR DESIGNATION: St Mary's Church is listed at Grade II* for the following principal reasons:
* It is a large High Victorian 'town church' of good architectural quality, extended sympathetically and with great subtlety by HS Goodhart-Rendel, a major mid-C20 architect;
* It possesses an excellent ensemble of late-C19 and C20 fittings by important designers, which add greatly to the quality and interest of the interior;
* It has group value with the adjoining Presbytery, also designed by Goodhart-Rendel;
* It has historical interest as a mainstay of mid-C20 Anglo-Catholic ecumenicalism and as the sponsor of the Malines Conversations.