Presbytery to Church of St Mary 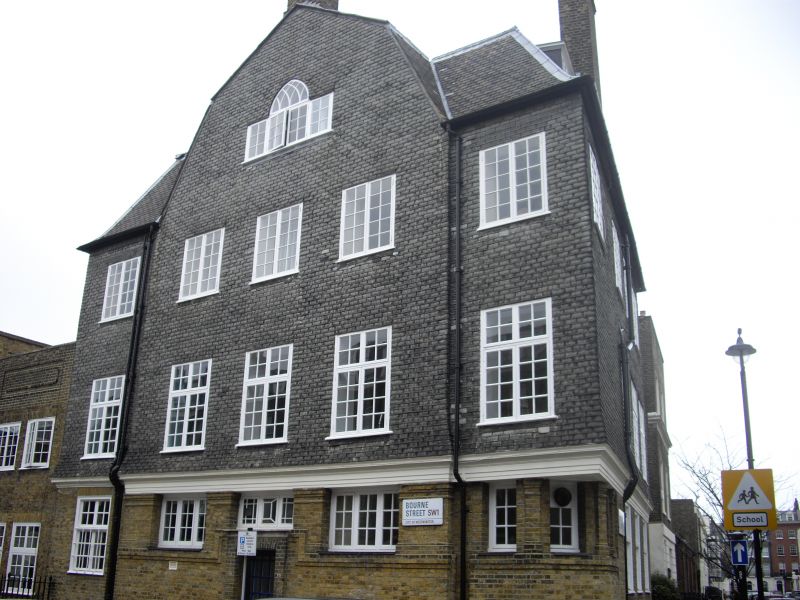 PLAN: The Presbytery stands on an irregularly-shaped plot on the corner of Bourne Street and Graham Terrace. The main building has three storeys, with a generous attic under a high mansard roof. There is a lower two-storey wing to the north-west. Its internal plan may reflect the public house from which it was converted. The entrance on Bourne Street leads into a narrow hallway with a large kitchen to the right, a smaller room to the left and the main staircase to the rear. Adjoining the latter is a small service lift. On the first floor a large L-shaped library occupies the outer corner of the building, with smaller rooms behind. The second floor and attic contain bedrooms.

EXTERIOR: The main entrance front faces Bourne Street and is almost symmetrical, with a slightly projecting three-bay centrepiece rising to a broad mansarded gable, flanked by recessed single-bay wings. The ground-floor brickwork has a raised cornice and string course, the latter breaking upwards around the centrally-placed doorway. The slate-hung upper floors are jettied out slightly, a fact dramatised at the street corner where the ground floor is canted to form a quarter-octagon with pilasters at the angles, above which the superstructure juts out sharply. The front door is of solid timber below with a nine-pane glazed panel above. The windows are timber casements with side-hung lights of six or eight small panes, placed either singly (at the corner), in pairs (as on the second floor) or in threes (flanking the entrance). Taller cross-casement windows with square top-hung upper lights give emphasis to the first floor. The attic gable has a Gothick Venetian window consisting of four opening lights with a pointed-arch tympanum over the central pair, its curved glazing bars forming intersecting 'tracery'. The side elevation to Graham Terrace is less formal: three cross-casement windows set off-centre on the ground and first floors, with four smaller windows on the second floor and two flat-roofed dormers on either side of a tall stack at attic level. The two return elevations have irregularly-placed windows, dormers and stacks.

Along Bourne Street to the north-west of the entrance front is a lower two-storey wing entirely of brown brick. The windows are cross-casements on the ground floor and paired lights above, under a high parapet with a big raised panel in the brickwork. The windowless return elevation has stepped buttresses, between which the walls display a diaper pattern in red brick headers. The retaining wall to no. 27 Bourne Street is similarly treated, the two blind elevations serving to frame Goodhart-Rendel's entrance porch and to mediate the transition between between the architecture of Bourne Street and the very different idiom of St Mary's.

INTERIOR: The front door gives into a small draught lobby, above which is a small square overlight in a deep splayed embrasure. The door from the hall beyond into the kitchen is glazed in its upper part, with two etched-glass panels each showing a pineapple in a chalice surrounded by decorative borders. Another of the ground-floor rooms has a small fireplace (square timber surround containing blue and white tiles with Biblical scenes; grate removed). At the rear of the house is a narrow dogleg stair with plain balusters, beside which is a small service lift. The principal first-floor interior is the library, an L-shaped room at the outer corner of the site, lit by tall cross-casement windows. The room contains fitted bookcases with glazed fronts, a large marble fireplace (arched marble surround with carved console brackets supporting the mantelpiece and a cast-iron grate beneath), and a small tiled fireplace similar to that on the floor below. There is another large fireplace (square timber surround with console brackets and grate) in the other main first-floor room, and a series of smaller fireplaces (one blue-tiled type with the grate removed, one with a square timber surround bearing a sun motif, and another with a square surround and an elaborate cast-iron grate with columns, urns and floral decoration) survive in the upper rooms. The principal attic room is lit by the Venetian window in the main gable, whose arched reveal is supported on two freestanding octagonal colonettes.

HISTORY: The building was once a C19 corner pub called the Pineapple. It assumed its present form in 1922, when it was converted and remodelled by Goodhart-Rendel to serve as a Presbytery for the adjoining church of St Mary the Virgin, originally built in 1873-4 by RJ Withers. In 1924-5 Goodhart-Rendel made alterations to the church itself, adding an entrance porch, corridor and side chapel.

REASONS FOR DESIGNATION: The Presbytery is listed for the following principal reasons:
* It is a characteristic and well-preserved example of the work of HS Goodhart-Rendel, an important mid-C20 architect.
* The building is very well detailed, and makes good use of striking and unusual materials.
* It has group value with the Grade II listed St Mary's Church, which Goodhart-Rendel extended shortly after he worked on the Presbytery.

The Presbytery at 30 Bourne Street is designated for the following principal reasons:
* It is a characteristic and well-preserved example of the work of HS Goodhart-Rendel, an important mid-C20 architect;
* The building is very well detailed, and makes good use of striking and unusual materials;
* It has group value with the Grade II listed St Mary's Church, which Goodhart-Rendel extended shortly after he worked on the Presbytery.