Church of St John the Baptist and Monson Mausoleum

A Grade I Listed Building in South Carlton, Lincolnshire 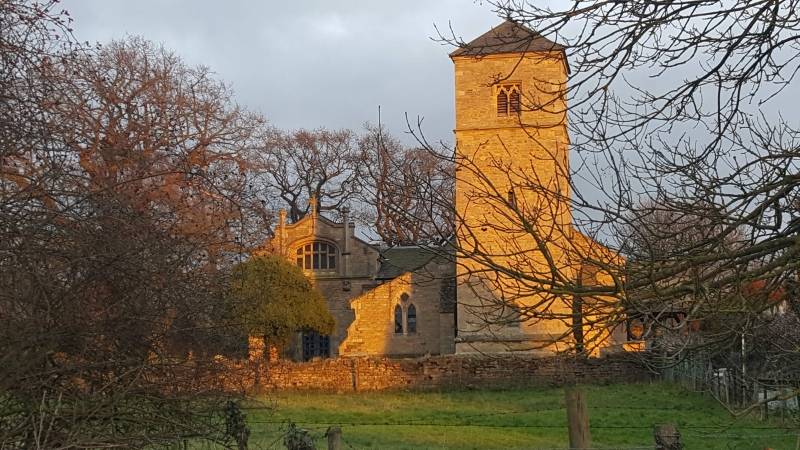 Parish church and Mausoleum. C12, C13, C14, C15, C16, 1851
mortuary chapel by Watkins, 1859 remodelling and restoration of
church by Teulon. Coursed limestone rubble, banded slate roof.
West tower, nave, chancel, north and south aisles, north chapel
with mortuary chapel beyond. 2 stage tower, tall lower stage
with belfry, moulded plinth, string course and hipped slate roof.
C18 sundial to south side. West wall has a single C16 4 centred
arched window with sunk spandrels, with above a single chamfered
segmental headed light. The belfry has 2 light ogee cusped
headed lights under flat hood moulds to each side. West wall of
north aisle has a C19 2 light window. North aisle wall has 3 C19
lancets. West wall of mortuary chapel has a central 4 centred
arched doorway with a segmental moulded head surround with base
blocks and broad architrave, over the door is a coat of arms.
Above the door a 5 light window with brattished transome set in a
4 centred concave moulded arch with hood mould rising to an ogee
point beneath a pinnacle supporting a cross fleury at the gable
and flanked by angled shafts rising from angel corbels and
terminating in castellated finials. To either side of the front,
buttresses contain niches with nodding ogee heads. The north
side is blank except for the frieze at high level which contains
3 ogee headed vents. The east end of the mortuary chapel has a
niche with elaborate pinnacled canopy. The north chapel east
wall contains 2 C19 2 light windows with ogee heads to the
lights. C14 chancel east window of 3 lights, with curvilinear
tracery. Chancel south wall has 3 C19 lancet windows and a blank
niche beneath. The south wall of the aisle has 2 c19 geometric 2
light windows. C19 south porch with stone base supporting open
sided timber structure with gabled roof and figured bargeboard.
South door is C19, moulded with hood mould and label stops.
Interior. The north and south arcades of 3 bays, early C13 north
arcade has one circular pillar with keeled rosy?ends and double
chamfered arches, elaborate label stops to hood mould. The 3rd
bay to the east also has keeled responds and double chamfered
arches with hood mould and ammonite label stops. The early C14
south arcade has octagonal piers and plain C19 responds. The
capitals are octagonal with ball decoration on the undersides,
double chamfered arches. C12 tower arch is round headed with
chamfered imposts and plastered reveals, but on the west side an
earlier C13 2 centred arch can be seen above it indicating that
the tower arch is reset. In the north wall of the chancel is an
early C13 arch into the north chapel with keeled responds and
double chamfered arch. The roof over the nave and chancel. are
C19 elaborately carved crown posts with painting above the
chancel. Fittings. The C16 wood screen with central 4 centred
arch with carving of sun and moon in the spandrels and painted
heraldic shields over; semi-circular heads to the lower panels,
ogee heads to the upper with bilobes and fleurons on the midrail
and cornice. In the sanctuary 2 contemporary choir stalls with
elaborately cusped blank arcading and poppy head bench ends.
There are also 4 other poppy heads. In the sanctuary a C17 altar
table with turned legs. Otherwise altar rails, pulpit and font
are all C19. In the nave hang 5 hatchments to the Monson
family. Monuments: in the north chapel, behind a screen of
wrought iron railings, on the north side of chancel, an elaborate
alabaster and marble tomb to Sir John and Lady Monson, 1625, by
Nicholas Stone. A free standing 6 poster with effigies of the
deceased in plate armour reclining with his wife on embroidered
cushions, a large tomb chest with 9 kneeling weepers at the sides
and foot. 6 Doric columns support an elaborate scrolled and
raised pediment containing a Latin inscription on the south side.
Also in the north chapel are fragments of 2 C13 cross fleury
decorated tomb stones, the matrix for a C16 brass and other
fragments of statuary. In the chancel north wall an C18 marble
plaque to Thomas Carlton with arms above and crossed palm leaves
beneath. In the Mausoleum a monument to the 6th Lord Monson,
d.1864, by Bartolini and Bencini, a copy of a monument in the
Annunciata in Florence, set on a high plinth in a neo-mid-C18
style with above a big coat of arms with lush foliage.