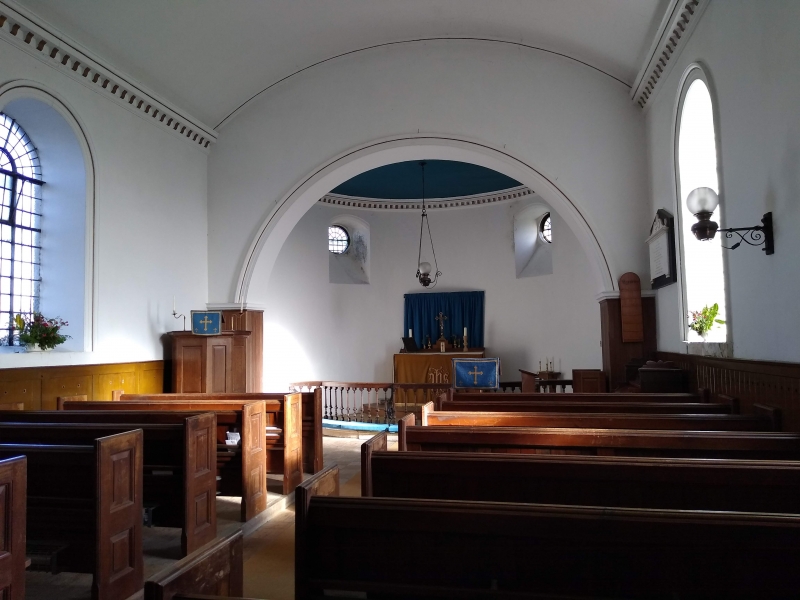 Parish church. C15 and 1771-73. Coursed, limestone rubble,
ashlar, slate and lead roofs. West tower, nave, apsidal chancel,
south porch., Tower of 2 stages, moulded string course,
embattled parapet with C15 corner pinnacles, unbuttressed
originally, but now with added angle buttresses. Recut 2 light 4
centred arched C15 window in blocking of the west door.
Immediately beneath the string course is a narrow blocked light.
To belfry stage, paired lights under 4 centred arches with hood
moulds in all 4 directions. To north wall of ashlar nave a
single semi-circular headed window with keystone and hood mould.
Nave has a plinth, parapet and molded cornice. The lead roofed
apse has a deep plinth and the sides have single keyed oculi.
South side of the nave has 2 windows matching the single one to
the north. The south porch is pedimented with angle pilasters, a
semi-circular headed door with impost blocks, hood mould
and keystone. Panelled double doors. The south door has a
single plain order with a keystone. Inside, the tower arch is of
2 chamfered'orders with narrow octagonal capitals and responds.
The rounded chancel arch has moulded architrave and imposts.
Dentillated frieze to nave and chancel, the nave has a plain
coved ceiling. The rear arches of the windows have architraves.
In the nave is plain panelling to dado height, an C18 oak
octagonal pulpit with brass candlesticks, finely curved altar
rails with delicately turned balusters. Font is C18, an
octagonal baluster shape with splayed wrought iron brackets. On
the chancel floor are 2 small brass plaques, one to Edward
Monson, d.l714, and the other undated to Sir John Monson. On the
south wall of the nave a white marble wall plaque in the Greek
Taste to Caleb Slater d,1805.