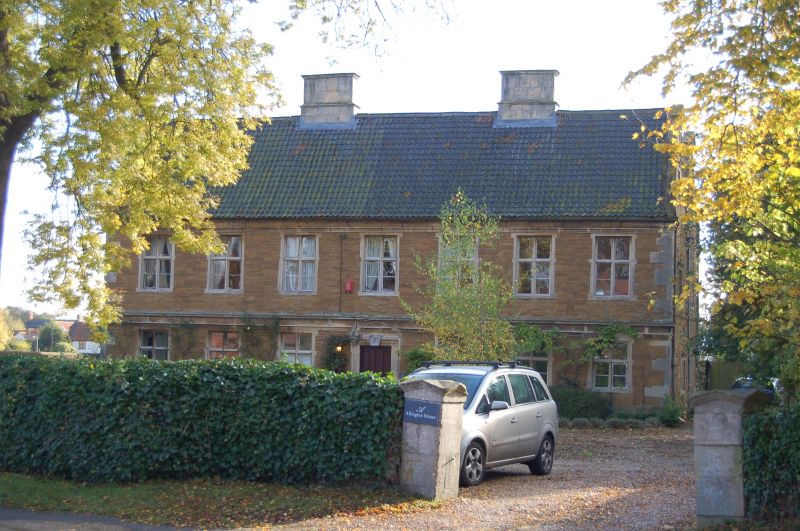 Small country house, mid C17. Deep gold ironstone dressed with paler gold
ironstone with grey pantile double ridge roofs with ornate Dutch gables with
scrolled volutes and 2 large ashlar ridge stacks with pronounced coping.
2 storey and garret with bay west front with plinth, moulded cornices at
1st floor level and at the eaves, and quoins. Central moulded doorway with
shouldered doorcase, pronounced keystone but missing pediment. Doorway flanked
by 3 windows on each side with 7 above, all with stone cross mullion windows.
East return has irregular fenestration with 2 light mullion basement window
beneath plinth to south, 3 light mullion window above with a cross mullion
above that and a 2 light mullion window in the gable. A similar range of
windows under the north gable with a range of 3 windows in between to the
south with a single light with a cross mullion above and a 2 light mullion
window above that. South front of 5 irregular bays with central doorway with
moulded 4-centred arch under rectangular head and plain plank door. To the
east are two 2-light mullion basement windows below plinth with 3 mullion
windows above, that by the door of 4 lights, the 2 to the east of 3 lights, all
with moulded cornices. West of the door an ironstone buttress has been added
with relieving arch above. Beyond a garage door has been inserted into a
mullion window with the moulded cornice still intact. Above are four 3-light
mullion windows with moulded cornices and a single light between the 2 windows
to the west. West return has irregular fenestration with a 3 light mullion
window to the south with another above and a 2 light mullion in south gable.
A similar range of windows under the north gable although the south light of
the gable window is blocked. Set between are two 2-light mullion windows,
one above the other, with a blank stone between. Interior has fine contemporary
staircase.