A Grade I Listed Building in Aswarby and Swarby, Lincolnshire 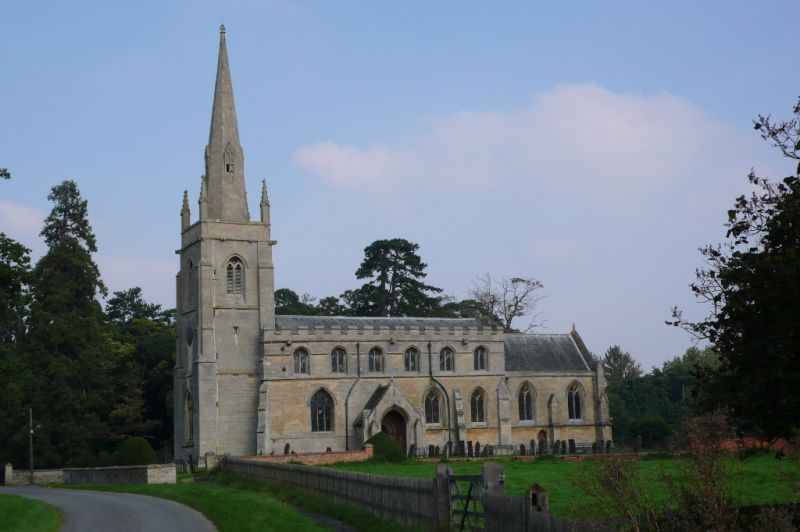 Parish church, C12, C14, C15, Chancel 1849 by H.E. Kendall, restored 1850
by Edward Blore. Limestone ashlar, some coursed squared limestone rubble,
slate and lead roofs. West tower and spire, clerestoried nave, chancel,
north aisle and south porch. 3 stage west tower with stepped clasping
buttresses, chamfered plinth and string courses, plain parapet and angle
pinnacles. Set back spire with a single tier of lucarnes in 4 directions.
In the belfry stage are 2 light cusped panel traceried windows with hollow
chamfered surrounds. The west window is of 3 lights, cusped heads to the
lights and panel tracery over, hollow chamfered surround. C14 south aisle
with stepped and gabled buttresses, plain parapet and lead roof. 3 light
west window with cusped flowing tracery and wave moulded pointed surround.
To the north side are 2 matching 2 light windows and a pointed and wave
moulded doorway. The east window is of 3 lights and matches the rest. The
nave has an embattled parapet and a clerestorey with 6 two light C15
windows having cusped heads to the lights and hollow chamfered 4 centred
arched surrounds. C19 chancel has gabled buttresses, plain parapet and
pairs of C14 style windows with flowing tracery. The east window is of 4
lights and also has flowing tracery. In the south wall of the nave are 2
C19 2 light windows in C14 style matching those of the chancel. Beyond to
the west is a C16 3 light window with panel traceried head, 4 centred
arches to the lights and a hollow chamfered surround. The clerestorey
matches that to the north. At the west end of the clerestorey is a painted
sundial with iron gnomon dated 1827. The gabled C19 south porch has gabled
buttresses and a continuously moulded and pointed outer doorway. The fine
inner doorway is late C12 with engaged triple angle shafts having stiff
leaf and a single palmette capitals. There are 3 orders of moulding to the
head, with reels, chevrons and a roll with 2 orders of dog toothing to the
hollow moulded hood. Interior: 4 bay C14 nave arcade, filleted quatrefoil
piers with with annular capitals and double wave moulded arches with hollow
chamfered hoods. Late C14 tower arch with engaged octagonal responds and
capitals, double chamfered arched head. Tall C15 chancel arch with narrow
roll moulded reveals and double chamfered head. The nave roof is C19 in its
present form with pierced ties having quatrefoil spandrels. It rests on C15
corbels with grotesque masks and capitals. The south aisle roof is also
C19, but there is a C14 piscina in the south wall with cusped ogee head and
to the north an ogee headed aumbry. At the west end of the aisle in the
south wall is a single surviving bay of C12 corbel table of a looped
pattern. Also in the aisle is the early C18 surround for a vanished tomb
consisting of ashlar piers with ball finials and wrought iron railings with
pointed tops. Fittings: Early C18 oak altar rails with turned bobbin
balusters and moulded rail. Minton tiled sanctuary with Symbols of the
Evangelists. Stained glass east window of scenes from the Life of Christ
in memory of Sir Thomas Whichcote, 7th. Bt., d. 1892. Good set of panelled
and scumbled soft wood pews in the nave dated 1847, bolection moulded end
panels and ramped doors. Early C18 octagonal softwood pulpit with bolection
moulded raised and fielded panel sides and fluted pilasters supporting a
moulded cornice. On the front an escutcheon bears the arms of Whichcote.
Late C12 round tub font with 4 engaged round shafts having stylised
acanthus capitals, C20 carved wooden lid. There are 3 funeral hatchments to
members of the Whichcote family, 2 in the nave and one in the north
aisle.Monuments: In the nave is a granite monument to George Bass,
discoverer of the Bass Strait, who was born in the parish and was baptised
in this church in 1771. In the chancel is a marble wall plaque to Frances
Hope, d.1704, rectangular with scrolled and draped sides, gadrooned base
with escutcheon of arms and a moulded cornice bearing flowers and an urn.
On the nave north wall are 2 limestone plaques to Robert Cole, d. 1717 and
Stephen Bee, d. 1766, one with swags and sprays, the other draped with
foliage. Also on the north wall is a large white marble wall plaque in the
Greek taste to Marian, Lady Whichcote, d. 1849, depicting the deceased
seated with a book and a lamp standard with coiling snake, all in a plain
surround; T. Campbell, Sculpt.. In the north aisle are 2 black and white
marble tablets to members of the Whichcote family, one dated 1810 with
fluted and draped urn is by Earle of Hull.