A Grade I Listed Building in Riverside, Liverpool 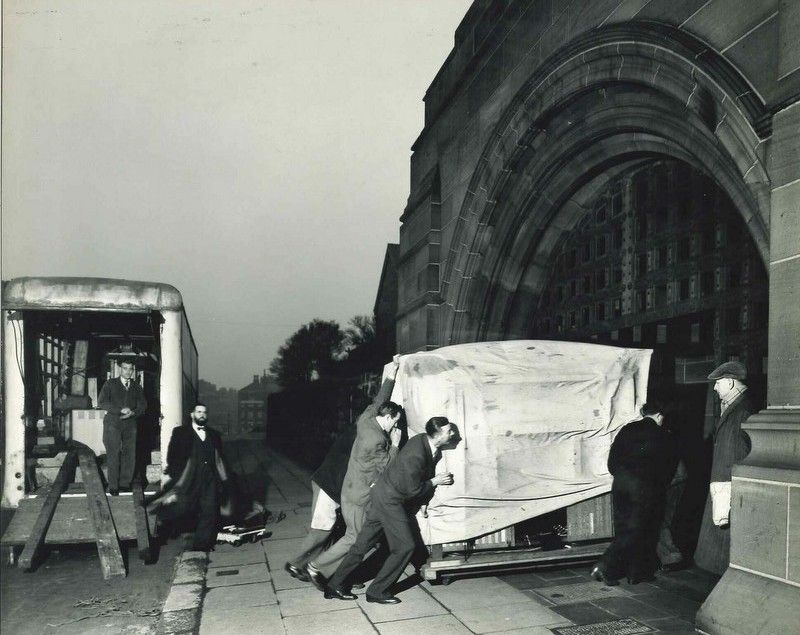 Massive in scale with contrasting east and west ends; that to the east is more elaborate, that to the west is in stark simplicity. Gableted buttresses. Mortar pointing to exterior and interior deliberately designed by Scott to highlight the Cathedral's stonework structure.

NAVE: 3-bays, in same style as choir but with fewer carved figures, large windows to north and south sides with simple geometrical tracery incorporating 2-lights with sexfoil above, quadrant jambs, separated by widely spaced buttresses, arcaded gallery above each window.

TRANSEPTS: Two transepts to each north and south side with tall traceried arched windows of 2-lights with octofoil above, copper roofs. Low arched projections to left and right of south transepts contain undercroft entrances.

PORCHES: Space in between transepts occupied by enormous porches with wide arched entrances and flat reinforced concrete roofs; that to ritual north side known as the Welsford Porch, that to ritual south side known as the Rankin Porch (cathedral's main entrance). Both accessed by stone stair flights, Hillsborough memorial stone laid by steps to Rankin Porch. Tall iron gates to Rankin Porch surmounted by elaborate cross and fish design. Both porches contain large arch to rear containing three wide carved oak doors with flat ogee heads merging into traceried tympanum. Triple-light windows to porch side walls with pierced balustraded gallery to top, studded oak doors to each side of Rankin Porch interior. Carved figure sculpture to both porches by Edward Carter Preston (Sculptor to the Cathedral, 1931-1955) influenced by C13 French portal figures, features based upon people working in the Cathedral. Sculpture depicts themes of Natural and Supernatural Virtues, Liberal Arts and Sciences, the Resurrection, and the Active Life. Carved figures of George V, Queen Mary, George VI, and Queen Elizabeth the Queen Mother to side walls of Rankin Porch.

VESTEY TOWER: 331 ft high, spans Central Space above and behind porches, design worked on from 1910 with Burnard Green as engineer. Square lower stage with plainer masonry and single large window to each north and south side incorporating 3-lights with rose above. Upper stage of tower is tapered with more elaborate decoration, octagonal corner turrets surmounted by carved lanterns, tall paired lancet belfry windows with timber louvres, 8 pinnacles surmounting top of tower with one slightly taller than the rest (added in February 1942 with carved initials of Scott and date).

CHOIR: 3-bays with large windows to north and south sides with simple geometrical tracery incorporating 2-lights with sexfoil above, carved figures and quadrant jambs, separated by widely spaced buttresses, arcaded gallery above each window. Walled founder's plot to south side in front of choir.

DULVERTON BRIDGE/NAVE BRIDGE: Completed 1961, spans first bay of Nave and draws eye down length of cathedral. Surmounted by pierced oak balustrade and gallery, accessed by two stairs; that to south side with dedication stone reading 'THIS STONE WAS UNVEILED BY HER MAJESTY QUEEN ELIZABETH II ON 25TH OCTOBER 1978 AT THE SERVICE OF DEDICATION TO MARK THE COMPLETION OF THIS CATHEDRAL', that to north side with stone displaying carved initials of Queen Elizabeth and Duke of Edinburgh with entwined lovers' knot.

CENTRAL SPACE (area between transepts underneath tower): Circular inlaid marble memorial to Scott to centre of floor reads '1880-1960/SIR GILES GILBERT SCOTT/O.M..R.A./ARCHITECT'. Three doorways to each north and south side lead to Rankin and Welsford Porches, similarly styled to the outer doors with sculpture by Edward Carter Preston, tower windows above, vaulted vestibule beyond doors to Welsford Porch now contains a cafe. Two paintings by Adrian Wiszniewski depict the parable of the Good Samaritan and the House built upon Rock, donated by the Jerusalem Trust in 1996. Star-shaped vaulted ceiling to Central Space with central circular opening through which the bells were hauled, Corona Gallery immediately below vaulting (originally used by cathedral's choir).

NORTH-EAST TRANSEPT/WAR MEMORIAL CHAPEL: Ornate alabaster and gilt altarpiece. Low rectangular carved alabaster cenotaph set on shallow plinth to front of chapel surmounted by bronze case containing the Roll of Honour (names of 40,000 soldiers, sailors and airmen from the Liverpool area lost during the First World War), bronze angels set to each corner of the case face inwards with kneeling figures of a soldier, sailor, airman and marine facing outwards. Wide arched porch surmounted by balustraded gallery to each side of transept; that to east side has glass case with decorative carved surround containing King's Regiment's Roll of Honour. Military colours displayed to each side wall with carved regiment badges above. Ship's bell of HMS Liverpool commemorating Liverpool's role as allied headquarters during Battle of the Atlantic in the Second World War.

SOUTH-EAST TRANSEPT (DERBY TRANSEPT): Contains tomb of 16th Earl of Derby (first chairman of Cathedral Committee) designed by Scott, bronze memorial depicts recumbent effigy of the Earl resting his head on a sculpture of the Cathedral with a timorous mouse peering out from his drapery.

AMBULATORY: Situated behind High Altar, lower floor level, corbelled ribbed vaulted ceiling with carved bosses. Four arched openings to west side (with stained glass windows above) lead into lobby area with series of oak doors with decorative ironwork and carved stone surrounds (one of which depicts a rose and Bishop's mitre), former vestries behind now used as education rooms. Two wide arched openings to west side of Ambulatory provide processional route in and out of Sanctuary. Stair flights to each north and south end set within arched openings accessing choir aisles, small corbelled balconies above.

SOUTH CHOIR AISLE: Monuments to Bishop Chavasse, Bishop Ryle and Dean Frederick Dwelly to north side, foundation stone to south side with inscriptions by Herbert Tyson Smith reading 'TO THE GLORY OF GOD THIS FOUNDATION STONE WAS LAID BY KING EDWARD THE SEVENTH ON THE 19TH DAY OF JULY 1904', and 'OTHER FOUNDATION CAN NO MAN LAY THAN THAT WHICH IS LAID, WHICH IS JESUS CHRIST'. Stained glass rose windows to west end of each Choir Aisle. Two doors towards east end of south wall of South Choir Aisle lead to Lady Chapel; that to west accesses a stone stair leading to the chapel floor, door to east leads to arcaded gallery to west end of Lady Chapel with short stair flight connecting to main chapel stair.

In June 1901 Francis James Chavasse, 2nd Bishop of Liverpool embarked upon plans for an Anglican Cathedral on St James' Mount. An earlier scheme in 1885 for a cathedral designed by Sir William Emerson next to St George's Hall had already failed. Sir William Forwood offered his support to the bishop, along with the Earl of Derby who donated an initial £10,000.
In 1902 a competition was held to find an architect and a suitable design. Out of 103 entries judged by G F Bodley and R Norman Shaw, five were shortlisted including that of Giles Gilbert Scott (son of George Gilbert Scott and grandson of Sir George Gilbert Scott, both renowned architects). Scott's Gothic design was finally selected in 1903, and he was a controversial choice for some due to his youth, inexperience and Catholicism. A compromise was reached whereby G F Bodley would act as joint architect.

Funding for the cathedral throughout its construction was raised by local subscription, including over £300,000 that was donated by Lord Vestey and his brother Sir Edmund Vestey for the construction of the Vestey Tower in memory of their parents. The builders of the cathedral were William Morrison & Son. The cathedral's sandstone came from the nearby Woolton Quarry, owned by the Marquis of Salisbury who later presented the quarry to the Cathedral Committee.

The foundation stone (inscribed by Herbert Tyson Smith) was laid on 19 July 1904 by King Edward VII. The partnership between Scott and Bodley was not happy and Scott was about to resign when Bodley died in 1907. The Lady Chapel (funded by Arthur Earle on behalf of the Earle and Langton families) was under construction at this time and the design had been heavily influenced by Bodley. Scott subsequently redesigned everything above the arcades that had not yet been constructed, and the Lady Chapel opened in 1910.

On 19 July 1924 the main part of the cathedral, including the Sanctuary, Chapter House, Chancel and Eastern Transepts, was consecrated in a ceremony attended by King George V and Queen Mary. The following day Giles Gilbert Scott received a knighthood. He was later appointed to the Order of Merit in 1944.

Work on the cathedral was delayed during both World Wars due to a shortage of labour and money, and damage sustained during the Second World War.

Scott's design evolved continuously right up until his death in 1960, and the finished building bears little resemblance to that chosen in the competition of 1903, which had a longer nave and twin towers instead of the final central tower. His 1942 design for the West Wall was redesigned by Frederick G Thomas and Roger Arthur Philip Pinkney in 1967 due to a lack of funding. The final consecration service took place on 25 October 1978 when the Cathedral was officially opened by Queen Elizabeth II.

A visitor centre/shop and refectory were created in the Welsford Porch and North-West Transept in 1984, and the Western Rooms were also converted into a dining area for larger groups in the 1980s. The statue of the Welcoming Christ by Dame Elisabeth Frink above the West Door was unveiled on 11 April 1993 by her son, Lin.

The Anglican Cathedral Church of Christ is listed at Grade I for the following principal reasons:

* Architectural Interest: it is the last undoubted masterpiece of the Gothic style, and of Gothic craftsmanship, in England. Its inspired use of light, space and height within the interior creates a feeling of awe and dramatic splendour and mark it out as one of the world's greatest modern cathedrals;
* Architect: it was the life's work of the eminent C20 architect, Sir Giles Gilbert Scott, inventor of the New Gothic style;
* Siting: set upon a raised plateau it forms a major landmark within Liverpool observable from all over the city and from the River Mersey ('the life of the city');
* Innovation: its construction displays great engineering skill that takes medieval concepts to their limits using C20 materials and techniques, including the tallest and widest Gothic arches in the world;
* Craftsmanship: the quality of design, craftsmanship, artistry and materials is of the highest order throughout the building;
* Artistry: the building's original concept has been enhanced by more modern works of art, including a powerful statue of the Welcoming Christ by Dame Elisabeth Frink.