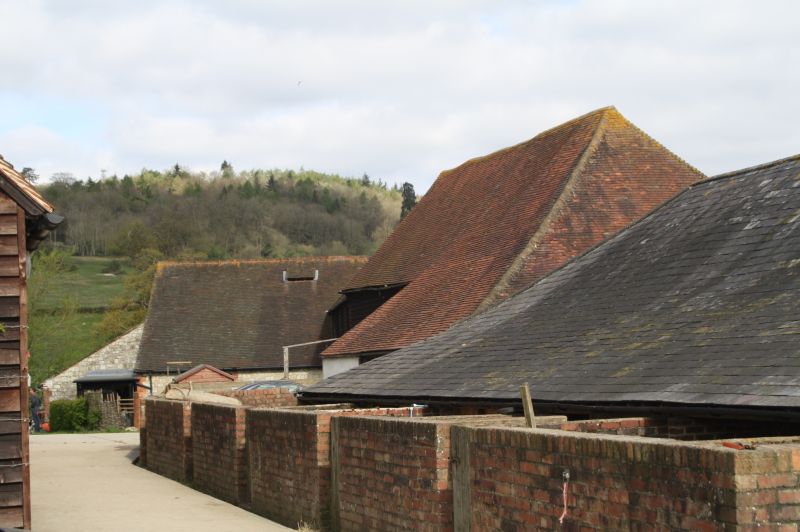 Plan: 5-bay threshing barn on an east west axis with opposed full-height
doorways to the threshing floor in the centre, the north doorway preserving
its original porch. Outshuts flank the north porch, outshut at the east end
and one on the south side, east of the door. The south doors were destroyed
by the 1987 hurricane.

Exterior: Single storey. The roof is gabled at the west end where the barn
adjoins a granary and hipped at the east end where it is swept down over an
outshut. The south elevation is blind to the left of the threshing doorway.
To the right the roof sweeps down as a catslide over a concrete block outshut
with a pair of stable doors. The north elevation has a deep porch with a
hipped roof in the centre flanked by outshuts with catslide roofs, each
outshut with one door and one window, one of the windows with shutters.

Interior: Clasped purlin collar rafter roof of 5 bays with intermediate
birdsmouth ties. There are queen struts above the tie-beam and concave braces
between the wall posts and tie beams, some of these braces no longer exist and
others have been replaced with straight braces. There is a single tier of
upward curving wind braces below the clasped purlins. The wall framing is of
large scantling with convex down braces, one only to each bay.

The threshing barn is still in use as a farmbuilding and forms a good
farmstead group with other agricultural buildings and Rumshed Farmhouse. The
farm has changed its name from St Julian's Farm to Rumshed Farm since 1975.
The parish and district boundary runs through the farmhouse, which is partly
in Sevenoaks District.