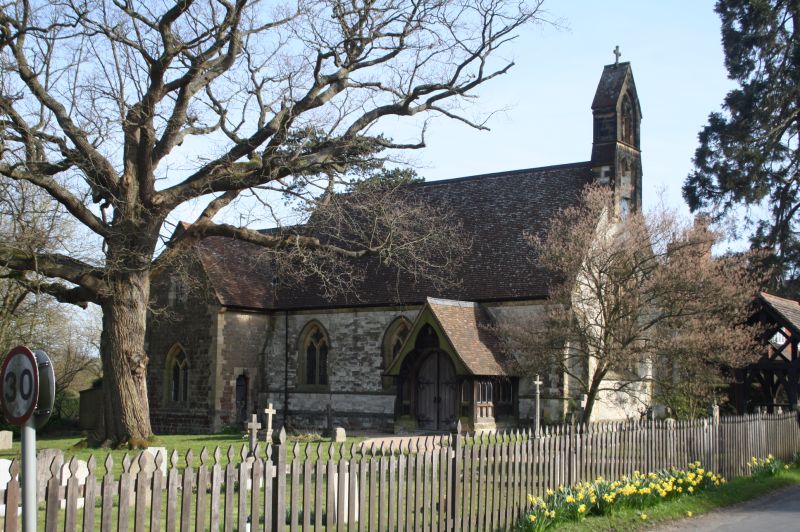 EXTERIOR: The church is a two-cell building with late 13th-century detailing. It has an aisleless, three-bay nave and a lower, narrower two-bay chancel (with added organ chamber/vestry on the N). Over the W gable is a double bellcote and on the N side a porch with a timber superstructure set on low stone walls: it has a trefoil cusped bargeboard over the entrance. The E and W windows are both of three lights, that at the E end having a cusped circle in its head. The side windows are all uniform having two lights with a cusped lozenge in the head. A stringcourse runs round the original building (not the organ chamber) immediately below the sills of the windows.

INTERIOR: The walls are plastered and whitened. At the junction of the nave and chancel there is an arch with a moulded head, the inner order of which rests on a shaft with a foliage capital and rising from a fluted corbel. The windows of the chancel have shafts at the edge of the reveals. Over the nave the roof is seven-sided and has raised tie-beams with crown-posts. The chancel roof is very nearly semi-circular. The alleyways of the nave floor have red and black quarry tiles.

PRINCIPAL FIXTURES: The nave and chancel seating is largely complete. That in the nave has ends with an inverted Y-section, a type that is typical of many Victorian seating schemes. The stalls have poppy heads and have pierced frontals and the back of the front row of seats also has open arches. The font is octagonal and has carved decoration on each face of the bowl. On the N side of the chancel the organ case, designed by W D Caroe, is a fine piece with traceried woodwork and several groups of pipes

SUBSIDIARY FEATURES: A timber First World War memorial lychgate with a high coffin-rest to the NW of the church forms the entrance to the churchyard. South of the church is the old school dated 1850: before the building of the church it may have been used as a chapel of rest and for afternoon Sunday services.

HISTORY: St Margaret's was a new church on a new site built in 1867. Much of the cost was met by John R Davison of Underriver House. His seems to have been the choice of dedication in memory of his mother Margaret Pearson Davison. The vicar, the Revd Thomas Offspring Blackall also contributed £400. The building of the new church led to the formation of the new Underriver parish (created in 1866). Construction took place under Henry Constable (contract price £1,931), a builder from Penshurst and the church was opened on 8 June 1867. Consecration, however, did not take place until 16 July 1875.

St Margaret's was built to designs by George Gilbert Scott (1811-78) who began practice in the mid-1830s and became the most successful church architect of his day. Often criticised for over-restoration, his work was in fact usually very respectful of medieval buildings, while his new churches generally have a harmonious quality which so often derived their character from the architecture of the late C13 or early C14. He also designed a number of very important secular buildings, for example the Albert Memorial and the Midland Grand Hotel at St Pancras. He was awarded the RIBA Royal Gold Medal in 1859 and was knighted in 1872. He is buried in Westminster Abbey.

The churchyard was consecrated for burials in 1889. Plans were drawn up by W D Caroe for an organ chamber-cum-vestry in 1907 but these were deferred and were not executed until 1930 (contractor Edward Punnett and Sons of Tonbridge (tender £601). The fine organ case of 1934 is also by Caroe.

REASONS FOR DESIGNATION:
The church of St Margaret, Underriver, Seal, is designated at Grade II for the following principal reasons:
* It is of special interest as an attractive small village church in a late 13th-century Gothic Revival style by one of the most important architects of the 19th century, George Gilbert Scott.
* It has a fine organ case by W D Caroe, one of the leading church architects of the early 20th century.