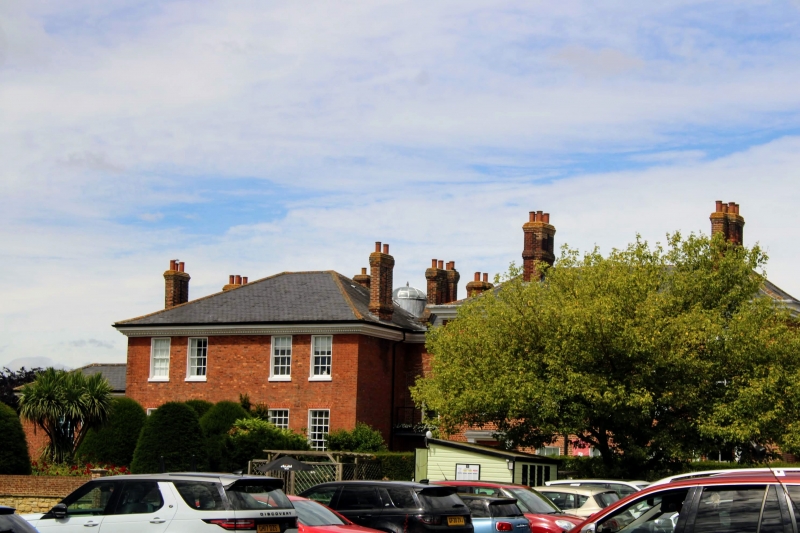 Plan and Development: Complex evolution. The main block faces approximately
east, over the garden, and is the core of the early house. It is rectangular
on plan with 2 principal rooms facing east. It has been extended to the rear
(west) in the early C20 in the Queen Anne style, adding another principal room
and again, probably slightly later, at the south end providing a large
withdrawing room. The entrance is now on the west side of the house into a
stair hall which gives access to all the principal rooms. To the north the
main block is linked to a substantial double depth service and nursery block,
probably early C19 in origin but thoroughly refurbished in the early C20 and
partly rebuilt after a fire of circa 1910. The Edwardian plan form, with all
its fittings is remarkably intact.

Exterior: 1, 2 and 3 storeys. Asymmetrical east (garden) elevation with a
2:4:2:5 bay front: 2 bays to the single-storey Edwardian drawing room at the
left, which has long 24 pane sashes. The adjoining main block is blind in the
centre with 4 long 24-pane sashes to the ground floor and 4 12-pane sashes to
the first floor, all with flat rubbed brick arches and green louvred sun
shutters. This block has a heavy Edwardian egg and dart cornice above a
dentil frieze, continued along the adjacent 2-bay block to the right which is
slightly set back with early C19 sash windows with segmental rubbed brick
arches; 2 16-pane sashes to the ground floor and 2 8-pane and 2 12-pane sashes
to the first floor. The 5-bay service and nursery block, set forward, adjoins
at the far right with evidence of rebuilding at both ends. This is 3 storeys,
the egg and dart moulding continuing under the eaves, with 12-pane sashes with
segmental rubbed brick arches to the ground and first floor and 2-light attic
casements, one replaced with a sash, with louvred sun shutters. The cornice
extends round the return of the service and nursery block but changes form to
a plainer moulding on the rear elevation, said to mark the extent of the circa
1910 fire damage. The west (entrance) elevation of the house is dominated by
a grand Edwardian facade in the centre, of 5 red brick bayson sandstone
footings with 3 central bays broken forward under a gable with a bulls eye
window, and the same egg and dart moulding, and long 18-pane sashes. To the
right (south) of this is the Edwardian entrance into a deep projecting porch
with a segmental arched roof. Paired outer doors below a Georgian style
fanlight lead to a flight of steps up into the house. To the left (north) a
probably early C19 4-bay facade to the service and nursery block with a hipped
slate roof, sash windows and a ground floor canted bay window. The south
return of the house has an incomplete loggia or verandah associated with the
early C20 drawing room.

Interior: Outstandingly complete and unspoiled early C20 interior, preserving
not only a substantial open well stair with turned balusters and a ramped
handrail, joinery, plasterwork, chimney-pieces and panelling in the principal
rooms, but also the Edwardian layout and many of the fittings in the service
rooms and a fine set of coeval baths, sinks and lavatories. Some particularly
unusual survivals are the early C20 American wallpaper in the breakfast room
(information from the owner); the horizontal blind to the glazed cupola over
the stair and the completely convincing sandstone style render covering
plastered brickwork in the entrance hall.

The house is said to have been a dower house to Somerhill in Capel parish
(q.v.) in 1830.

Complete Edwardian interiors in houses of this size are rare. Group value
with listed items in the Edwardian garden.