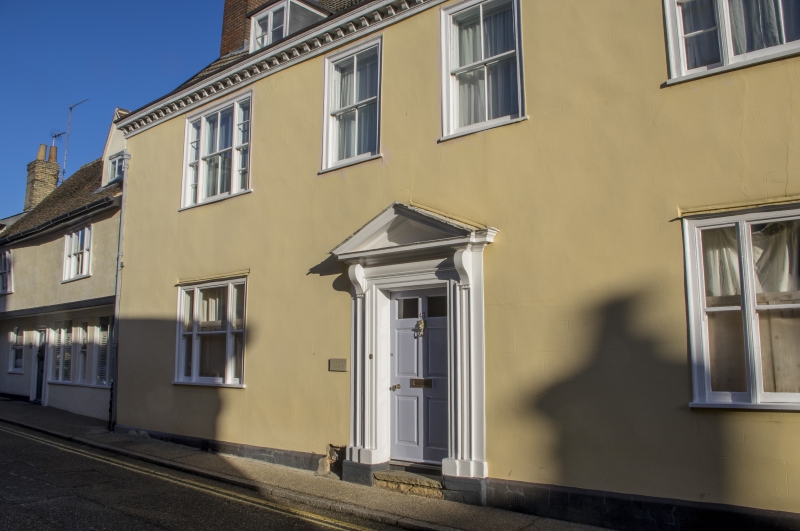 House. C18. Timber-framed and rendered; concrete pantiles; a
wood modillion eaves cornice.
EXTERIOR: 2 storeys and attics. 4 sash windows to the 1st
storey, the 2 outer windows tripartite, all in flush cased
frames with a single vertical bar to the main lights. 2
tripartite sashes without glazing bars to the ground storey. 3
flat-headed dormers have 2-light single bar casement windows.
A central 6-panel door has a wood doorcase with moulded
architrave, plain console brackets and a pediment. 2 end
chimney-stacks have plain rectangular red brick shafts. The
rear wall has very varied fenestration.
A long 2-storey timber framed rear range in 2 phases of
building also has various windows, including one upper
small-paned sliding sash.
INTERIOR: extensive cellars: the wall fronting Guildhall
Street is old, with flint rubble and render, but most of the
walling is in C19 brick, progressively extended, with the
remains of numerous wine bins. Front range of the house c1700,
extended at the back, and probably raised, later in the C18.
Large entrance hall with the remains of dadoes with horizontal
boarding and ornately carved dado rails and skirtings. Similar
boarded dadoes with simpler rails and skirtings also survive
in the room above the hall. A mid-C18 stair with turned
balusters and moulded handrails divided into 2 at the half
landing.
The principal rooms to left and right of the hall are fully
panelled: bolection mouldings on the right and early C19 sunk
panels, with a semicircular alcove to the side of the
fireplace, on the left. The fine Adam style fireplace surround
in this room is a C20 introduction from elsewhere.
The 1st storey rooms lead off a wide rear corridor. Attics,
divided into a series of rooms, are mainly plastered but with
principal rafters exposed: 6 bays, butt purlins and a ridge
piece possibly introduced during later repairs. The eastern
part of the rear range was probably originally a free standing
outbuilding and has fragments of weatherboarding. Both parts
of the rear seem built of reused timbers.
For most of the C19 the house was occupied by members of the
Clay family, ale and porter merchants, later wine and spirit

merchants, first mentioned in James Oakes' Diary in 1808.
Their trade would account for the progressive enlargement of
the cellars.