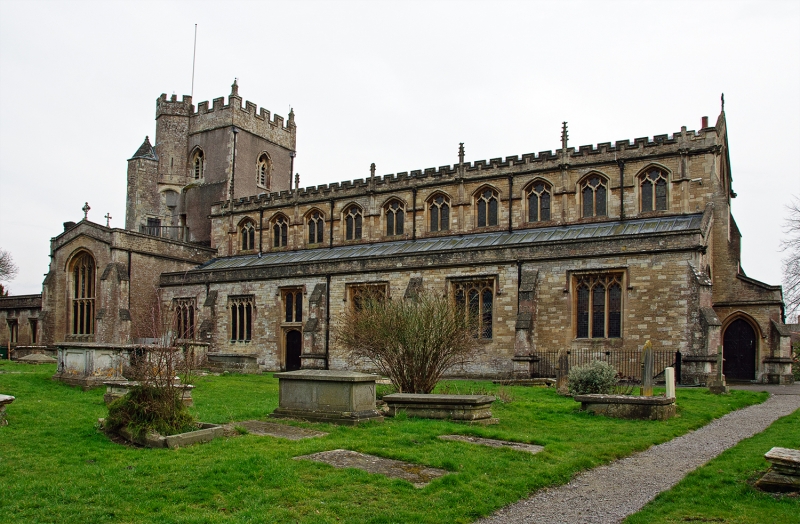 Of Norman origin. Some 11th century and late 14th century fabric at the crossing and tower, nave rebuilt during a major restoration by Sir Arthur Blomfield, 1887-9.

Plan: A cruciform church with long nave and aisles, south porch, transepts and crossing tower, chancel with a two-bay chapel to the south, vestry to the north.

Exterior: The medieval crossing tower and transepts survive. The tower is low and embattled, with small two-light Perp bell openings. The north side of the tower has a stair turret, and another to a former rood loft awkwardly joined to it. The north transept window is of four lights with transom, under a four-centred arch. Five light east window. South of the chancel, a late 15th century chantry chapel to the Maudit family, with four-light windows under broad arches. Impressively long Neo-Perp nave (1887-9) with ten clerestory windows, embattled parapet and small pinnacles. Big four-light west window with transom, and below it a low entrance narthex with three openings. Low lean-to aisles with square headed windows and deep buttresses. Gabled south porch.

Interior: Visible evidence of the 11th century church is restricted to a round-headed opening in the north transept, although Norman masonry might be embedded elsewhere in the crossing and tower. A number of sculptural fragments survive from the late 14th century rebuilding, one (a small figure of an angel now in the south aisle above the entrance) of high quality. The east and west crossing arches have two chamfers, and they sandwich the narrower four-chamfered arches to north and south. All the mouldings die into the piers without capitals. Stylistically the crossing belongs perhaps to the late 13th century or early 14th century. The late 15th century south chapel has a good roof with four medieval angel corbels, a piscina, two-bay arcade to the chancel and a panelled arch into the transept. There is an interesting east-wall arrangement whereby the inner window arch extends to ground-level to incorporate the former reredos and altar. An opening in the north transept provides evidence for the existence of a former rood screen between the crossing and the chancel. Five-bay nave. Arcades with quadrilobe piers, arch-braced roof without collars or tie-beams, but with two tiers of wind braces and alternate pendants.

History: St Denys stands about half a mile north-west of Market Place, now on the fringe of Warminster, near the site of an Anglo-Saxon minster. There seems to have been a rebuilding (or remodelling) of the tower and crossing in the later 14th century, and the chamfered crossing arches may be somewhat earlier. The nave was replaced c. 1723-4, and again in 1887-9. It is often said that this rebuilding almost entirely removed the medieval church, however, substantial and very interesting parts of the old structure survived. The restoration resulted from a partnership between the Anglo-Catholic Canon Sir James Philipps, rector of Warminster 1859-97, d. 1912; and Arthur William Blomfield (1829-99), one of the most active and successful church architects of the Gothic Revival. Blomfield was articled to P.C. Hardwick and began independent practice in 1856 in London. His early work is characterised by a strong muscular quality and the use of structural polychrome often with continental influences; he later favoured the Perpendicular style, as at Warminster. He became diocesan architect to Winchester, and was architect to the Bank of England from 1883. Blomfield was knighted in 1889 and was awarded the RIBA's Royal Gold Medal in 1891. The church sits on a low hillock, in a well kept graveyard with a good array of table and slab tombs, pitched paths and to the south, an enormous yew tree (probably 14th century) supported by numerous posts.

* A remarkably big and prosperous town church, externally notable for the long and regular aisled nave as rebuilt by Blomfield in 1887-9.

* Significant surviving Norman and Perp fabric in the crossing, tower and transepts, evidence of the scale and wealth of the medieval church.

* Exceptionally high quality late Victorian fittings, particularly the chancel with its work by Harry Hems and several other important names.

* On the site of a Saxon minster church of historic significance.