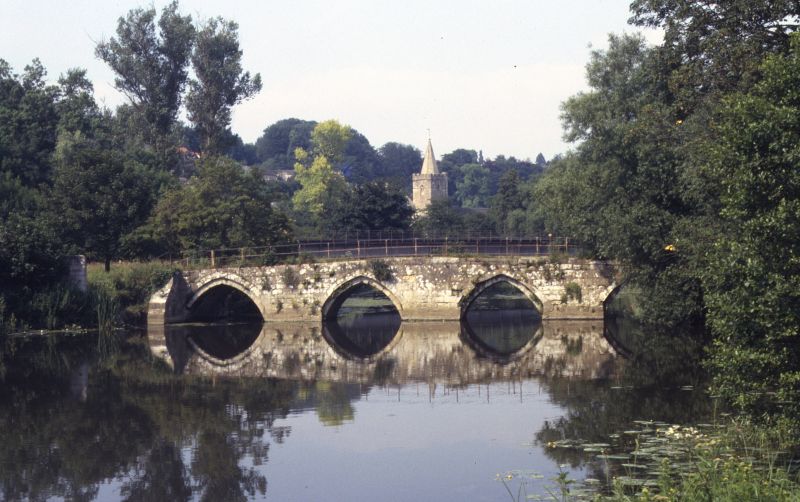 DESCRIPTION: the former packhorse bridge, approximately 85m to the north-west of Barton Farmhouse (Grade I), spans the River Avon to a small island before dividing to form a ramped roadway and a narrower mid-C19 footbridge over the side stream. The packhorse bridge comprises four pointed arches, with recessed pointed arches beneath. The three, triangular cut-waters on the upstream side of the bridge have pyramidal weather cappings. To either side of the north-west end of the bridge are stone buttresses. There are no signs of an earlier parapet but the tall kerb stones (partly buried under later resurfacing of a formerly cobbled road surface) mark the edge of the roadway. These are surmounted with tubular iron railings which continue to the south-east end where the bridge continues over the island with 25m of stone walling to its upstream side. The attached footbridge spans the side stream of the river and comprises two large stone slabs supported on a rectangular stone pier which has been chamfered on its upstream side.

Barton Bridge, a former packhorse bridge, dates from the C14, and spans the River Avon to a small island (on which is a Second World War reinforced concrete and brick shell-proof type 24 pillbox), before continuing as a narrower mid-C19 footbridge over the side stream. Documentary records suggest that the cutwaters on the upstream side of the bridge are a later medieval addition. The bridge underwent a scheme of repair in the late C19 and a significant proportion of the facing stones are from this period, and later.

Barton Bridge, a C14 former packhorse bridge with attached mid-C19 footbridge, is listed at Grade II* for the following principal reasons:
* Historic interest: it is a significant example of a medieval multi-span bridge of which less than 200 examples are now known to survive in England;
* Architectural interest: it is a neatly-made structure with very well-constructed arches to the spans, and cutwaters, and illustrates medieval bridge building techniques; * Degree of survival: although it has been repaired since it was built its medieval characteristics and form remain evident, and its continued use and adaptation in the C19 is an on-going testament to medieval road building in England.