A Grade I Listed Building in Bradford-on-Avon, Wiltshire 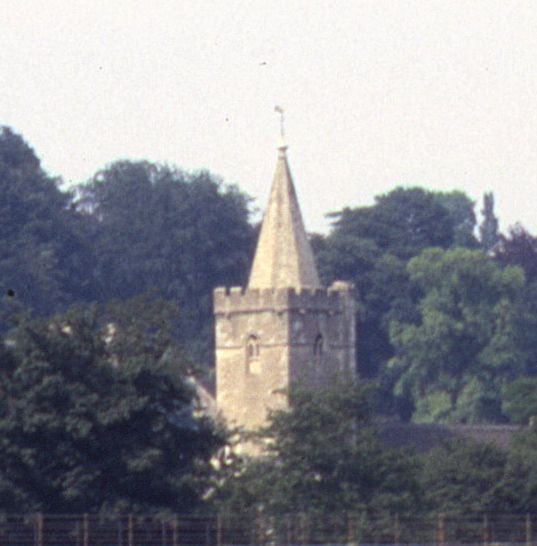 Exterior: The church sits low beside the River Avon in the centre of the town. The chancel has angle buttresses, and an east window of five lights (grouped 2:1:2), with a rose containing three cusped triangles; motifs of c. 1300-10, the date the Norman chancel was extended. On the north side, one Norman window, and another blocked one to its west: these have deep splays within. The chancel south wall has a random composition of Norman, E.E. and Perp openings, and flat Norman buttresses. The nave also has one surviving Norman window above the south door, evidence that its dimensions are Norman. The nave, south chapel and north aisle have embattled parapets. The Kingston chapel (south) was built c. 1630-50, and rebuilt in 1865-6. The west tower is not large, and has small buttresses, a short spire, and Perp bell openings of two lights. The west doorway has a depressed arch, and the west window a shallow pointed arch, two mullions and one transom. The north aisle sits hard against the road. Its fenestration is uneven, reflecting its origin as two chapels, and the windows to the west have Late Perp inverted-Y tracery, i.e. c. 1450-1500.

Interior: The body of the church is spacious, although not well lit. The chancel arch of c. 1500 was rebuilt in 1864. To its left are two doors giving access to the Late Medieval rood loft. Chancel roof of 1881, a panelled wagon vault with bosses; the nave roof must be of similar date. The chancel has two very big arched tomb recesses. In the south wall, one of the early 14th century with a big double cusped arch, framing gable and pinnacles, containing an ex-situ effigy of an armoured knight. That on the north wall has a simpler moulded arch without capitals, and with an outer gable. The ex-situ female effigy is badly weathered. The north aisle was built in two parts, each part serving as a chantry chapel. That at the west, St Nicholas, was founded in 1420. That to the east, originally a Lady Chapel, was presumably built before the western chapel. Its chantry was re-endowed in the late 15th century by Thomas Horton, clothier. In the north wall is a late Perp reredos - a recess with canted sides and top, and panels forming a central cross. It is an unusual survival of pre-Reformation evidence for a chantry chapel. From the north aisle to the chancel, a uniquely long squint of c. 20 feet. The nave arcade was partly rebuilt in 1865-6, carved with ribbons winding round two of the piers.

Principal Fixtures: English altar with gilded angel finials by W.H. Randoll Blacking, 1938. Stone reredos with relief panels, 1856. Choir stalls of ash, 1983 (architects, ASTAM Design Partnership). Heavy stone pulpit with blind Perp tracery, presumably c. 1866. The font has a Perp octagonal bowl with unmoulded square panels, perhaps recut in the 17th century with quirky geometric patterns; the stem has cusped panels and shields. Left of the high altar, a fragmentary Late Medieval wall painting of the Virgin Mary being taught by her mother Anne. Two panels survive from the dado of the rood screen, with fragmentary 16th century paintings of the Fathers of the Church, writing. Monuments: (For medieval effigies in the chancel, see Interior). Brass showing Thomas Horton and his wife in contemporary dress of a wealthy clothier, c. 1530. Splendid brass to Anne Long, d. 1601, shown in fashionable Elizabethan dress. Also a brass in the north aisle to Thomas Horton and his wife, c. 1530. In the north aisle, a crude tablet in late 17th century provincial style; skulls and crossbones, oval panel with arms of the Mercers' Company, formerly a broken pediment, four arched panels, three now blank, one inscribed to William Baily, d. 1712. In the chancel is a lavish monument to Charles Steward, d. 1698, by John van Nost (1701). Standing figure under drapery, against an arched ground of slate, with urns, putti and achievement of arms. Opposite, a more reserved monument without figure to Anthony Methuen d. 1717, by J.M. Rysbrack. A sarcophagus set in an Ionic frame, with putti perched on the pediment. In the north aisle, an architectural tablet to John Thresher, father and son, c. 1741, yet still Baroque, with putti holding back swags. Vigorously composed tablet to Lt. General Francis Smith (d. 1791); oval ground with portrait urn and mourning woman and an angel: in the style of William Paty of Bristol (cf. his Long monument, St Vigor, Stratton-on-the-Fosse, Somerset). There are many fine minor Neoclassical tablets, mostly c. 1780 - 1830. There is good stained glass: the highly-coloured east window is by O'Connor, 1856; in the chancel north, a single light by Herbert Bryans, 1921; the north aisle east and adjacent light in the north wall are by Heaton, Butler & Bayne, 1877 and 1886. Next to the latter, one by Burlisson & Grylls, 1888. In the nave south, one large window with many Flemish medallions, mainly early 16th century, collected c. 1770 and reset here in 1954.

Subsidiary Features: The long narrow churchyard has wrought-iron gates and overthrow at the east end. Opposite the church is the famous Saxon church of St Lawrence, which Holy Trinity must have replaced.

History: Restored by J. Elkington Gill (of Manners & Gill, Bath), in 1865-6, comprising reseating, but without changes to the structure. The church was reopened on Shrove Tuesday, 1866.

Reasons for Designation: The church of Holy Trinity is designated at Grade I for the following principal reasons:

* Extensive survival of the original Norman fabric, which constituted the present nave, and about half the length of the present chancel.
* Early 14th century Dec alterations to the chancel, including two big and ostentatious tomb recesses.
* Unusual partial survival of a 15th century chantry reredos, as well as high quality Perp window tracery.
* A fine collection of mural monuments, including one by Rysbrack and another with a lively Baroque figure by John van Nost.
* An impressive group of 16th century Flemish glass medallions given in the 18th century, as well as good Victorian and later stained glass.
* The 19th century restoration includes elements of originality and note, such as the scrolled enrichment to nave piers.
* Historic significance as the medieval parish church of Bradford on Avon, providing much evidence for its prosperity as a centre of the woollen cloth industry.