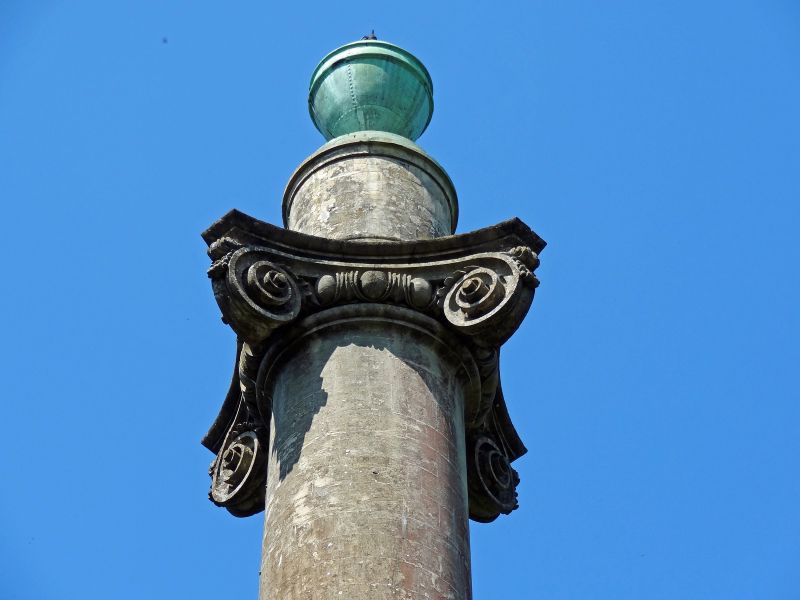 Commemorative column on grand avenue from Tottenham House (q.v.
Great Bedwyn CP). c1760 and 1789. Ashlar limestone. A single
giant Ionic column raised on pedestal within raised enclosure.
Capital crowned by cylinder carrying a bronze urn. Inscriptions in
white marble inset in pedestal, reading: In Commemoration of / a
signal instance of Heaven's Providence/ OVER THESE KINGDOMS, / in
the year 1789: / by restoring to perfect Health / from a long and
afflicting Disorder / their excellent and beloved Sovereign /
GEORGE THE THIRD / This Tablet was Inscribed / by / THOMAS BRUCE
EARL OF AILESBURY. South-east side: This Column was erected / by
Thomas Bruce Earl of Ailesbury / As a Testimony / of Gratitude /
To his ever honoured Uncle Charles Earl of Ailesbury and Elgin /
who left to him these estates / and procured for him the Barony of
Tottenham. / And of Loyalty / To his most Gracious Sovereign /
GEORGE III / who unsolicited conferred on him / the Honour of an
Earldom. / But above all / of Piety / TO GOD, FIRST, HIGHEST, /
BEST. / Whose blessing consecrateth every gift / And fixeth its
true value / MDCCLXXXI. Column believed to have been originally
set up c1760 at Brandenburg House, Hammersmith and later removed
and rededicated. Around enclosure, iron railings with alternate
javelin and wavy heads set on dwarf wall. Urns on corner
stanchions.