A Grade I Listed Building in Cubbington, Warwickshire 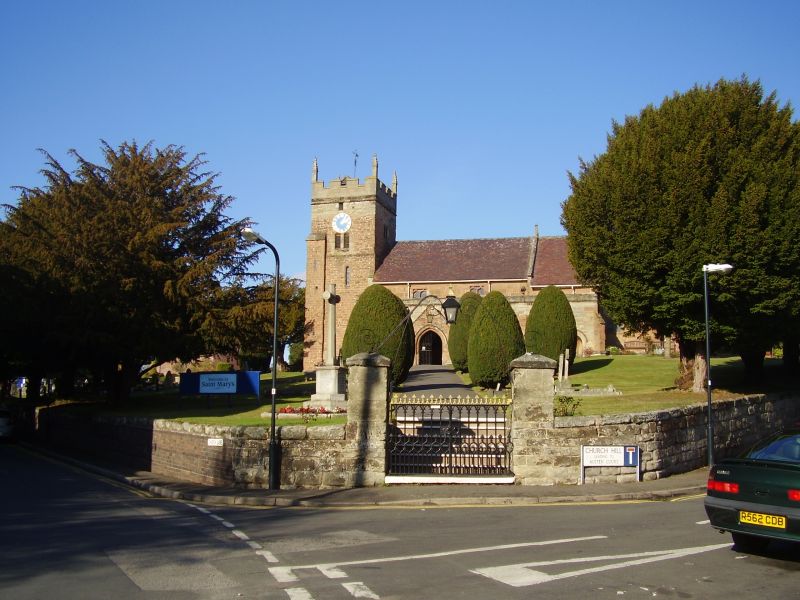 Parish church. Consists of chancel, flanked by modern organ chamber and vest-
ries, clerestoried nave with north and south aisles, south porch and west tower.
Earliest part of existing fabric is south arcade of nave dating from early
C12. About end of C12 tower added at west. Aisles rebuilt during C13, to
which period the south doorway belongs, but windows belong to C14 when chancel
rebuilt. In 1885 north arcade rebuilt, both aisles extended eastwards to form
vestries, and porch rebuilt. Nave and chancel roofs renewed in 1899. External
masonry of medieval portions is of red sandstone ashlar, extensions to aisles,
top courses of tower, battlements, and wall of south aisle in grey sandstone.
In chancel modern east window of three lights with reticulated tracery. Windows
on north and south are modern, each of two trefoiled lights with a quatrefoil
in head. In south wall an aumbry, a piscina and three sedilia. In north wall
a tomb recess or Easter Sepulchre. Chancel arch is two-centred, of two hollow
chamfered orders which are continuous without imposts. In the nave the clere-
story windows of which there are two on each side are of late C15 type. South
arcade which is of early C12 date is of three semicircular arches of two plain
orders carried on circular shafts and responds. Cushion capitals carved with
scalloping. North arcade rebuilt in 1885 is of three two-centred arches carried
on two octagonal columns and responds. In north wall of north aisle are modern
windows of two-trefoiled lights, a door of plain chamfered jambs and two-centred
head, and a square aumbrey recess. In south wall of south aisle the windows
are modern but door has elaborate mouldings typical of C13. Also a double
recess with moulded two-centred head one of which is a piscina. Tower is set
slightly to south of axis of body of church. It is entered from nave by a
two-centred arch of three-chamfered orders. Externally the tower is of two
stages with clasping buttresses on west angles. West window is a narrow lancet
deeply splayed and belfry windows are of two-lights with four-centred heads.
C15 embattled parapet with crocketted pinnacles. Interior: C12 flower-pot shaped
font on modern base standing in tower. On east wall of nave, an oval carved
wooded monument to Captain Abraham Murcott, drowned off Scilly Isles in 1702.
Rich foilage and at foot a boat supported by a sailor and Neptune. Mid C19
communion rails in heavy brasswork by Skidmore of Coventry. Royal Coat of
Arms - oval late C18.