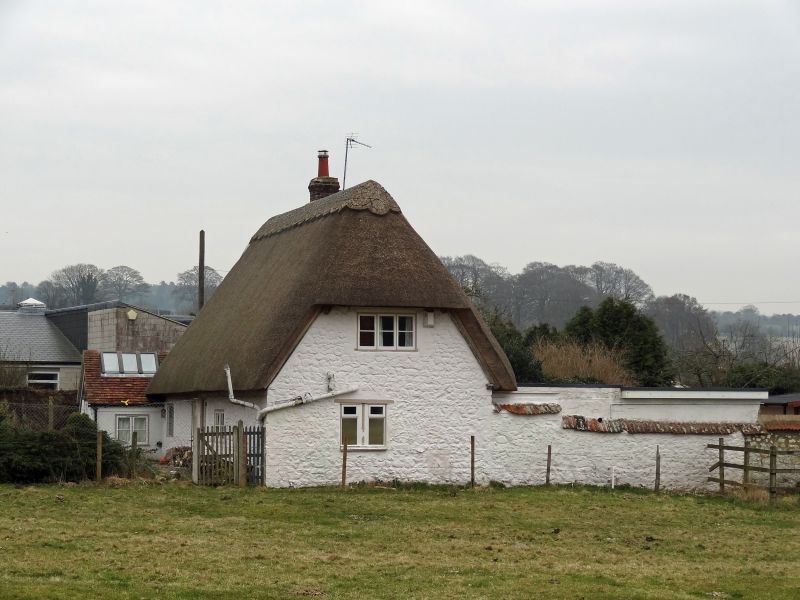 House, C15 and C16 with C20 additions. Brick and sarsen, probably
replacing timber framing. 1 storey and attic, 3 bays with right
outbuilding, now kitchen and c1950 front extension. Original
structure probably with central open hall and services in narrower
bay to right beyond cross passage. Left bay rebuilt about C16-C17
approximately one third narrower. Timber casement windows and
metal windows and angled door in front extension with flat roof.
Thatch reduced in height over right outbuilding.
Interior structure with cruck truss left of cross passage, with
saddle apex built up to ridge, and rear cruck descending to ground.
Tie removed to insert stack, in later C16-C17, stone with 60mm
bricks to flue and simple chamfered firebeam. Later over inserted
from rear. Wattle and daub wall right of crosspassage removed
below tie, which has soffite mortices for central door. Purlins
trenched without visible windbraces. Inserted in former hall is a
fine moulded ceiling with double moulded chamfered to spine beam
and joists. A building here is recorded in 1520, as a house
belonging to the priest. The vicarage formerly stood on an
adjoining plot.