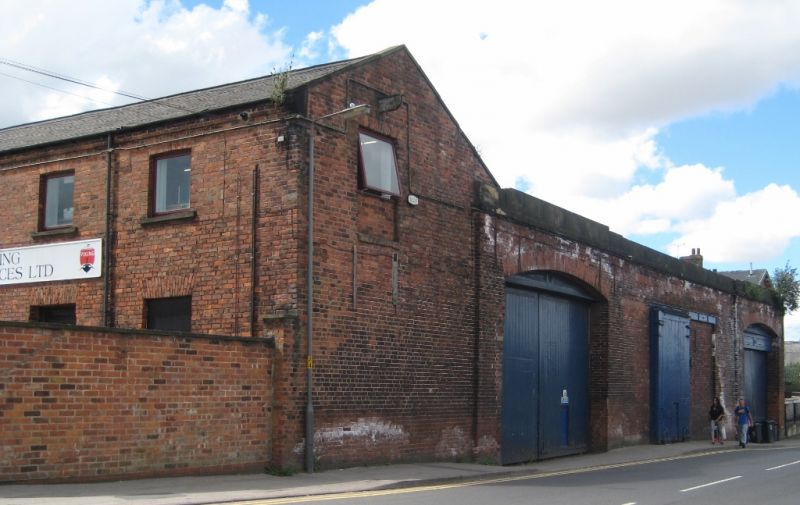 2.
1830-34. Architect: James Walker. Brown brick. Triple-pitched modern roof, hipped
at north end. North elevation (former entrance) has ashlar parapet, and, although
altered on its conversion to a railway goods shed in 1841 (date "1841" on cast
iron lintel), appears to have been articulated as two storeys. Centre four bays
have modern openings, but retain voussoirs of first floor windows. End bays break
forward slightly, and have segment-headed full height doors. Side elevations have
windows with glazing bars, splayed reveals and almost flat lintels of finely gauged
brickwork: four on west side, one more blocked, and probably others obscured by
later buildings: two on east side. South elevation weather-boarded.
Interior has two rows of self-consciously simple cast iron columns, slightly tapering,
with Egyptian capitals. Two outer spans have timber king post trusses, broader
central one has queen post trusses.
History: This former railway station was the terminus of the Leeds and Selby Railway,
the earliest incorporated, railway company in the West Riding, first projected in
1821 as a response to the Aire and Calder Navigation's Canal between Knottingley
and Goole. It was first surveyed in 1825 by Joseph Locke, under direction of George
Stephenson, who envisaged it as part of a railway from Liverpool to Hull. It was
incorporated in March 1829 and surveyed again by James Walker. It obtained its
Act on 29 May 1830, was begun on 1 October 1830 and opened on 18 September 1834.
The line included Richmond Hill Tunnel, Leeds, the first in the world through
which passengers were drawn. Ceased to be used as a station on construction of
the present one in 1840. In 1841 the line was surveyed by Robert Stephenson on
behalf of the York and North Midland Railway, who eventually bought it; and his
survey illustrates this building as it is now, but with a clerestory ventilator
to the central span.