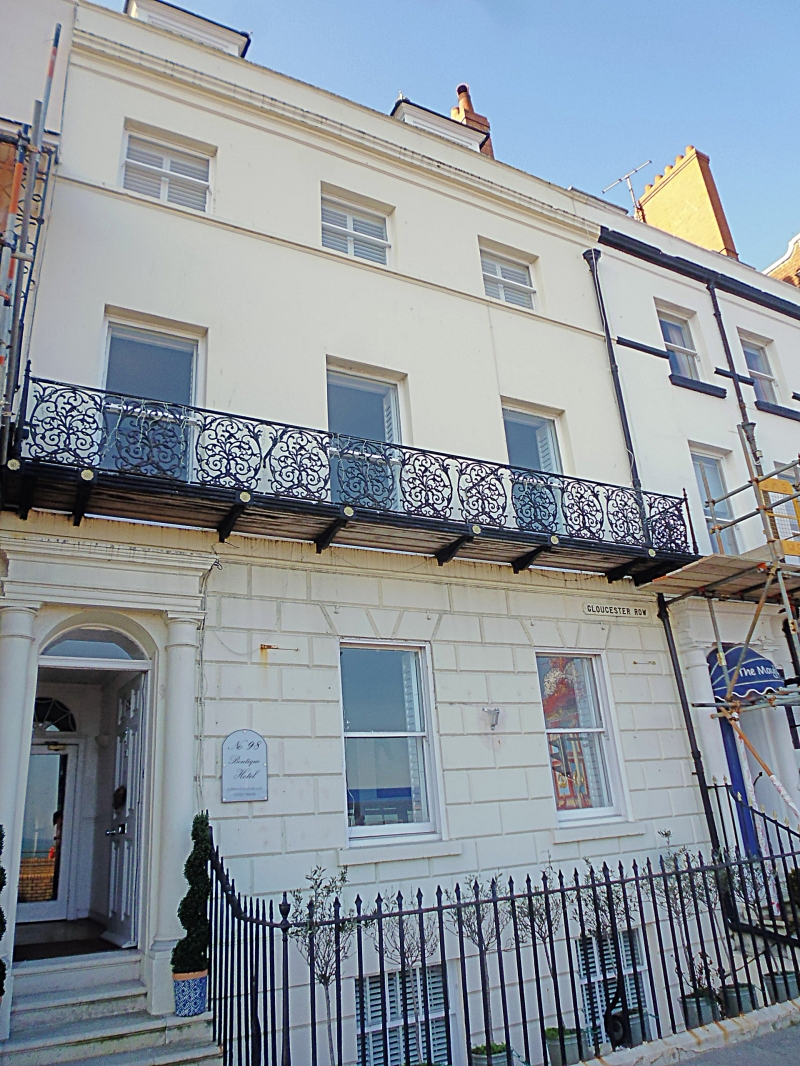 Formerly known as: Nos.7-13 ESPLANADE.
2 houses at end of terrace. c1790 (RCHME). Rendered, slate
roofs.
EXTERIOR: 3 storeys, attic and basement, each 3 windows, all
plain sashes. No.98 has 2 lofty hipped dormers with 6-pane
sashes, and No.99 two smaller dormers with plain sash. At
first floor the sashes are taken to floor level, and open to a
full-width balcony on cast-iron brackets and with original
decorative cast-iron balustrades. In No.99 the second floor
lights have been extended down, through the sill band, and
this property has a late Victorian canted oriel to the ground
floor. No.98 has 9-pane sash to the basement, and No.99 a
plain sash.
To the left of each is a panelled door under shallow plain
fanlight, in half-column doorcases with flat entablatures;
that to No.99 is covered by a C20 illuminated sign.
Ground floor is rusticated, there is a second-floor sill band,
a moulded cornice, blocking course and parapet; 2 deep stacks
to the central party wall.
INTERIOR: not inspected.
SUBSIDIARY FEATURES: the doors are on steps with nosings, and
the basement areas are enclosed by original spearhead
railings, returned to the doorways, and with standards, and a
gate with steps down to the basements.
These 2 houses are at the end of an original group of 8, of
which the centre units, Nos 96 & 97 (qv), are on a slightly
grander scale, with higher parapet; the former No.100 was
demolished and replaced in the late C19. The alterations to
ground and second-floor windows to No.99 are identical to
alterations in No.95 (qv).
(RCHME: Dorset, South-East: London: 1970-: 355).