Church of St Clement with St Barnabas and St Matthew 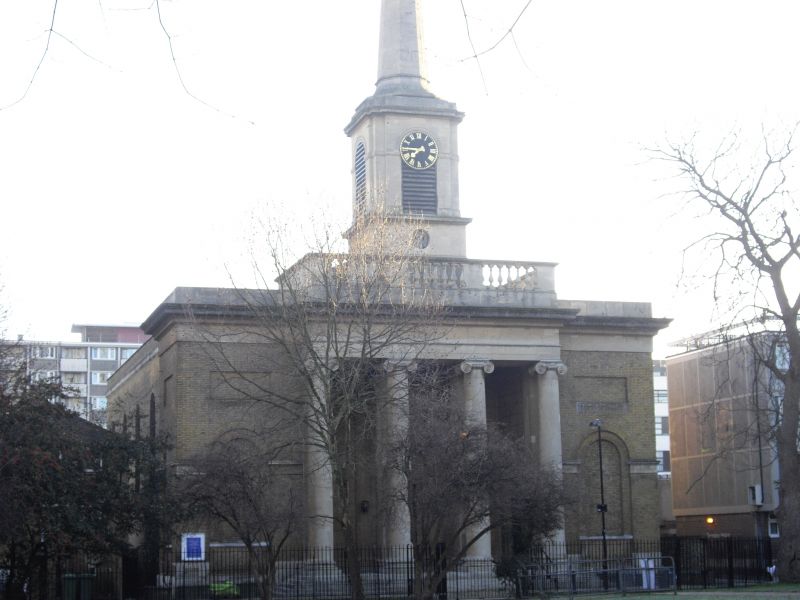 II
Anglican church, 1822-26 by Thomas Hardwick, the body of the church rebuilt in 1953 by Gordon Jackson and Partners and Norman Haines Design Partnership. Stone and yellow brick set in Flemish bond, roof of Welsh slate. Nave and chancel under a single roof, west portico with tower and spire over. Shallow canted full-height central bay to east end; single-storey vestry extension of 1953 to east end; moulded stone cornice extending along north and south walls; rainwater head to left of central bay dated 1822. Five bays to north and south, the westernmost showing the original arrangement of two tiers of windows lighting aisles and galleries, the rest now having single tall round-arched windows; rainwater head in angle of south wall and west front; parapet. The west front consists of a giant Ionic tetrastyle portico in stone with flanking wings in brick; the portico has plain Ionic columns placed before antae, the outer antae engaged; the interior of the portico lined with ashlar in banded rustication and cross-vaulted; stone cornice and blocking course to wings which have round-arched windows set back within a round arch, those to the west now blocked. Balustrade over portico; square central tower in two stages, the upper stage with two re-entrant angles and round-arched openings with louvres; slender octagonal spire.

The interior dates from the reconstruction of 1953; vestibule below west gallery; otherwise a single space with massive piers creating a notional division into two-bay chancel, nave and aisles. The piers are flanked by Corinthian columns and there are two more columns fronting but not supporting the gallery. Elaborate plasterwork to the ceiling, in a neo-Classical style. Fine C18 pulpit brought from elsewhere.