Railway Viaduct Embankment and Overbridge to the East of Church Farm 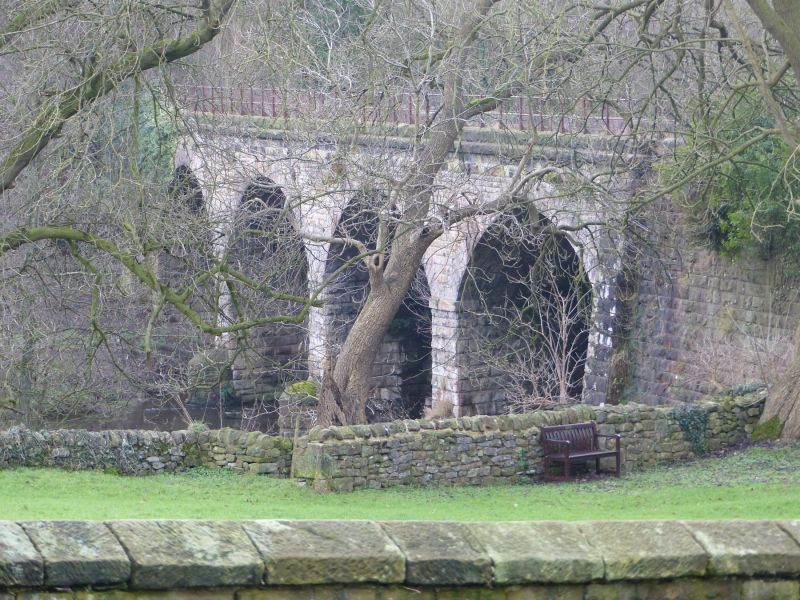 Entry Name: Railway Viaduct Embankment and Overbridge to the East of Church Farm

PARISH OF ROWSLEY OFF CHURCH LANE
SK 26 NE
5/180 (East Side)
7.3.86 Railway Viaduct, Embank-
ment and Overbridge to
the East of Church Farm
II

Railway viaduct, embankment and overbridge. 1851-2, to carry
the Rowsley to Buxton extension of the Midland Railway over the
River Derwent. Massive coursed gritstone with rock-faced
dressings. Slightly curved viaduct section to east end
comprising four semi-circular headed arches, springing from
rock-faced padstones, set on rectangular piers rising from
rounded cutwaters. A shallow parapet sits on a plain band
course, with plain C20 railings above. On the northern side, at
either end of the viaduct, shallow raking buttresses support the
abutments. Further to the west, a substantial embankment is
faced with masonry on its northern face. This embankment is
pierced at the western end by a narrow stilted semi-circular
arched opening over a trackway. The arch is flanked by shallow
pilaster-like buttresses, extending from which are downward
sloping splayed and coped abutments, terminating at plain stone
piers. See also Matlock Urban District.