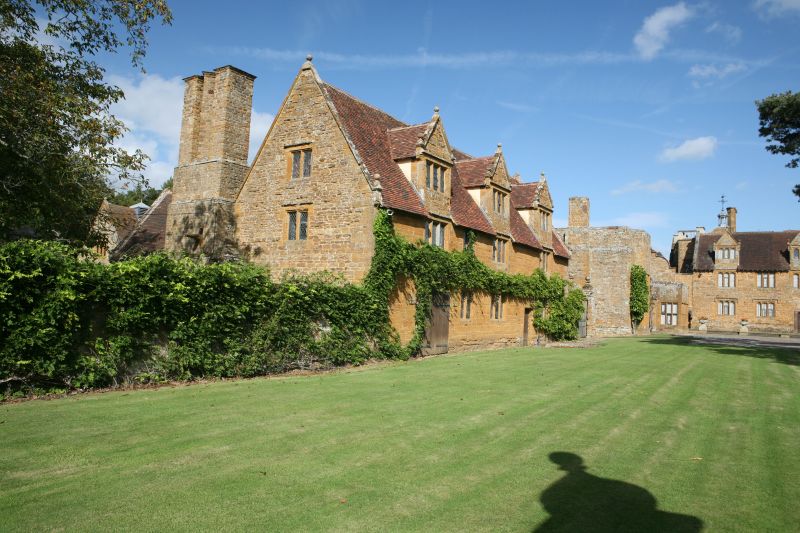 The description shall be amended as follows:

In line 39 delete the following sentences:

'Interior not inspected but noted by C Hussey as having C17 panelling
including a room with a carved overmantel and a mid C17 staircase. The Stone
Hall of 1909 which has an open timber roof, was divided horizontally in 1969.'

The following shall be added at the end of the description:

Interior: The C16 house is a 3-room, cross-passage plan. Hall (screen
removed) with contemporary wall panelling that continues as an overmantel to
the stone fireplace (moulded with high-set stops). To either end of this
range are open well stairs, C17, turned balusters and ball finials and
pendants to newels. Many rooms with panelling, some in situ, some brought in
at the time of Lutyens's alterations (one with good pedimented doorcases).
Tapestry room with moulded stone door surrounds and large fireplace, with
attached columns and entablature to overmantel, and niches to sides.

Manor House. C15-C17. Remodelled and enlarged 1904-38 by Sir Edwin Lutyens for
Ivor Guest, second Lord Wimborne. Alterations in 1968-9 by Jellicoe and
Coleridge. The original domestic buildings consisted of three groups around a
courtyard. The dwelling house on the west side; a range to the north, originally
separate, now linked to the main house by C20 additions forming an L-shaped
block; and a group on the south side consisting of stables (q.v.) gatehouse
(q.v.) and dovecote (q.v.). The east side of the courtyard is enclosed by walls
and a gateway with ornamental piers (q.v.). Dwelling house, C16 and C17.
Datestone 1652 on south side records a remodelling begun but not completed by.
John Ianson, died 1657. The symmetrical garden front was formed in 1909 by
Lutyens who added a suite of rooms across the east front with central and
north-east projections in Jacobean style to balance Ianson's south-east wing.
Main block is therefore now double-pile E-plan. Coursed squared ironstone,
ashlar quoins, tile roof, stone stacks. West front to courtyard, 2 storeys and
attic; 5 bays. Central doorway with flat-arched moulded wood frame and old
studded plank door, Regularly spaced stone mullioned windows have 3 arched
lights with cut spandrels and square hoods. 3 gabled dormers with 3-light
stone-mullioned windows. Coped gable ends with ball finials. Square staircase
tower with balustraded parapet which, on south side links with south-east wing
of 1652 which has a shaped gable. An imported late medieval half timber house
(q.v.) was attached to the north side in the early C20. On the north side, the
Stone Hall, added by Lutyens in 1909-10, is the full height of the main block
with a similar shaped gable. Projecting forward from the Stone Hall is a one
storey range in ironstone by Lutyens. This is the Dining Roan, 1904 (now
kitchen), with a bay window added in 1938 and an extension to the Dining Room of
1924, in minimal Tudor style with cubic shapes and a large canted bay window.
This range ends with a small courtyard divided from the main courtyard by gates
and ornamental stone piers. The entrance and exit have semi-circular flights of
steps forming a circular landing. At the rear, a carriageway spanned by a half
timbered corridor connecting with the north range. North range, C17, once a
separate dwelling, was converted in the early C20 to form servants rooms and
nurseries. Ironstone ashlar, tile roof, stone stacks, 2 storeys and attic, 4
bays. Doorway in second bay from right has chamfered stone frame and plank door.
3-light stone-mullioned window with flat moulded hood to right. Similar window
to left. 2-light stone-mullioned window in second bay from left and C18-C19
stone arched carriage entrance in left bay. 3-light stone-mullioned windows to
first floor, except for similar 2-light window in second bay from left. Gabled
dormers with 3-light stone-mullioned windows. Coped gable ends with ball
finials. Interior not inspected but noted by C. Hussey as having C17 panelling
including a room with a carved overmantel and a mid C17 staircase. The Stone
Hall of 1909 which has an open timber roof, was divided horizontally in 1969. A
service wing by Lutyens north of the house was demolished in 1968. The Manor
passed to the Catesby family by marriage in the C14. William Catesby who died
c.1472, is buried in the church. His son, William, was the Chancellor of the
Exchequer to Richard III. Robert Catesby in 1604 financed the schemes for Guy
Fawkes. In 1612 the manor passed to Bryan L'anson, a London draper and in 1703
was purchased by Joseph Ashley, also a draper. In 1903 it passed to Ivor Guest,
later second Lord Wimborne.
(C. Hussey: Ashby St. Ledgers; Country Life 1951, p.274ff, 348ff, 420ff, 496ff;
L. Weaver: Houses and Gardens by E.L. Lutyens, 1913, p.158ff; Buildings of
England: Northamptonshire, p.90-93).