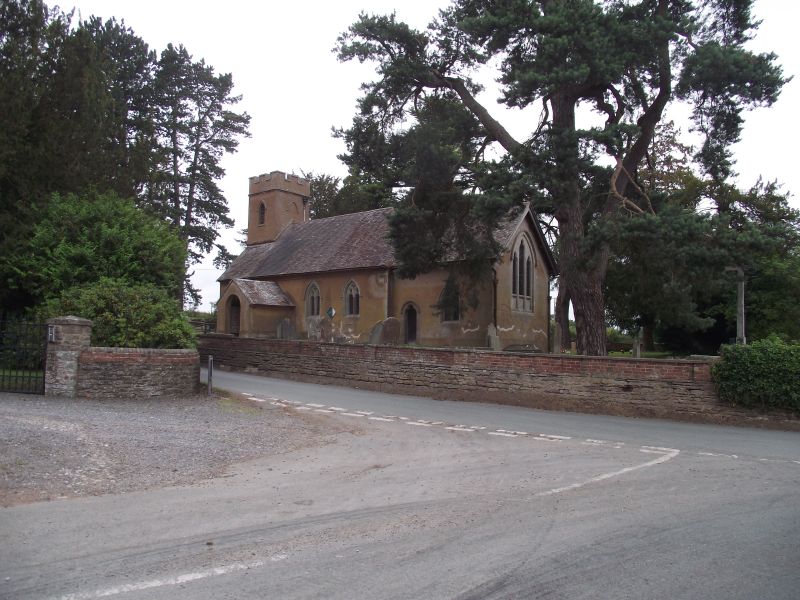 EXTERIOR. Unbuttressed chancel with a trefoil-headed priest's door on the S side with nailhead decoration to the hoodmould. Pevsner considers this likely to be an 1830s copy of a medieval doorway. The uncusped Y-tracery S chancel window is probably 1835 tracery in a C12 opening; 3-light C19 plate-traceried E window; round-headed C12 N window to chancel with a deep internal splay. The N side of the nave has steeply-pointed 2-light traceried windows and one round-headed C12 window with a deep internal splay. Slender embattled W tower of 1835 with a 2-light Y-traceried W window and arched belfry openings with hoodmoulds. The porch has a plain round-headed outer doorway and a chamfered round-headed inner doorway with one order of zig-zag moulding, mostly renewed. The inner face of the doorway has jambs that turn from square section to chamfered and a splayed head.

INTERIOR. Unplastered walls. Double-chamfered chancel arch. Chancel screen with square-headed openings with tracery and traceried openings to the wainscot. Some of the structure may be late medieval but the tracery appears to be C19 or early C20. The W wall has a round-headed tower arch and, above it, a C12 round-headed window, now internal. The chancel has curious Norman style decoration to the inner arch of the S window. Pevsner considers it C12 but it may be C19. C19 2-bay chancel roof with an arch braced truss. Nave roof with 2 arch-braced trusses and 2 tiers of purlins. This is difficult to date but the principal timbers may be late medieval. The rafters and boarding behind have been renewed and the ridgeboard is secondary. c.1945 polygonal timber pulpit with fielded panels and an inscription commemorating World War II. Font with a plain polygonal bowl on a stem. Nave benches with shouldered ends. Brass of 1640. Panes of Flemish glass in the W window.

A very heavily restored church of C12 origins, preserving some C12 openings, with a Gothick tower of 1835.