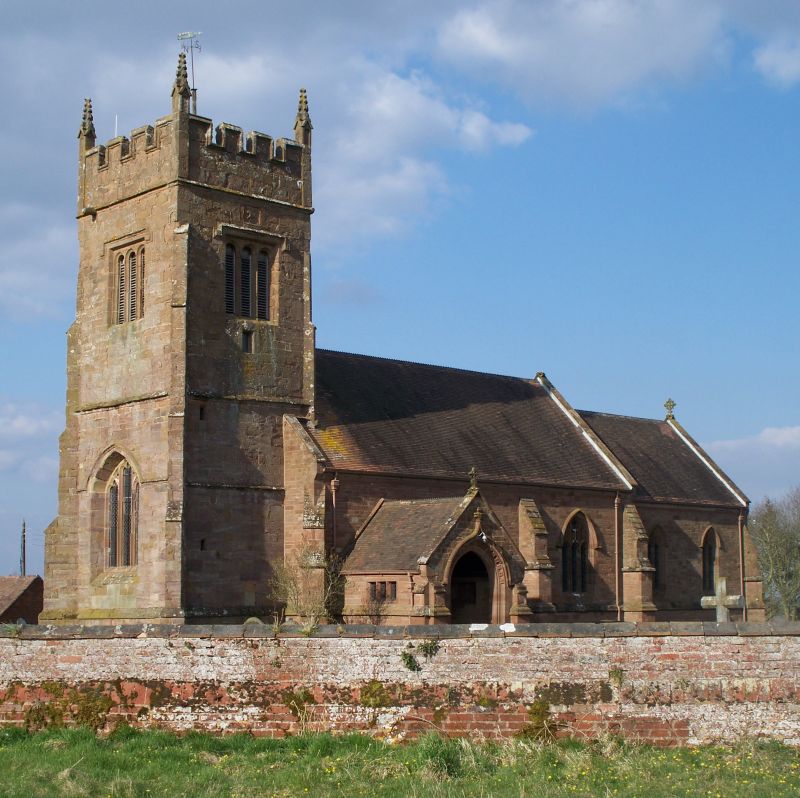 EXTERIOR: Perpendicular church with Tudor-Gothic tower. The 2-stage tower has string courses and diagonal buttresses. In the lower stage is a 3-light west window with impost band carried over as a hood mould. In the tall upper stage are straight-headed 3-light bell openings, with round-headed lights and hood moulds. In the south wall is a weathered relief panel of a lion and in the east wall worn tablet with the date 1579. The embattled parapet has corner pinnacles, behind which is a pyramidal roof with weathervane. Nave and chancel have moulded stone cornices and coped gables. The 3-bay nave has 3-light windows. The west bay in the south wall is the porch, which has a pointed entrance under crocketed ogee hood mould, and straight-headed 3-light side windows. The south doors have flowing strap hinges in a surround with continuous moulding. In the 2-bay chancel are 2-light windows and a 5-light east window above date tablet in the plinth. On the north side is only one window and the organ chamber/vestry. It has a 2-light straight-headed north window, pointed east door and external stack on the west side.

INTERIOR: The tall C16 pointed tower arch has semi-circular responds with broad fillets. The nave has a 5-bay arched-brace roof on a moulded cornice, with 2 tiers of windbraces formed into X patterns. The chancel arch has an inner order of shafts with moulded capitals, and hood mould with head stops. The chancel has a trussed-rafter roof. The arch to the north organ chamber has a continuous moulding. Ogee-headed piscina and aumbry are in south and north walls, the former with a corbelled basin. Walls are exposed dressed stonework. The nave has C19 patterned tiles and parquet floors beneath the pews. The stepped chancel floor is concealed by fitted carpets.

PRINCIPAL FIXTURES: The octagonal Perpendicular font is on a raised plinth, has a panelled stem and quatrefoils around the bowl. The polygonal pulpit has open panels with Gothic tracery, on a stone base. Pews have panelled ends and the nave has a panelled wainscot. Choir stalls have ends with poppy heads incorporating pointed quatrefoils, and open pointed-trefoil frieze to the fronts. The wooden communion rail is on brass uprights with scrollwork brackets. The open 3-sided reredos is on octagonal posts and incorporates candlestick-bearing angels and a cornice of foliage trails. Beneath the tower are wall tablets to William Jones (d 1823), Walter Mansell (d 1795) and Elizabeth Farmer (d 1837). There are several stained glass windows. The east window shows the life of Christ, by Camm & Co of Smethwick, 1908. The chancel north wall has SS Mary and John, possibly 1887 by Samuel Evans of West Smethwick. In the nave north wall is the Baptism of Christ and Christ blessing children, possibly also 1887, by Done & Davies of Shrewsbury.

HISTORY: The earliest part of the building is the tower, dated 1579. The remainder was rebuilt, replacing a Georgian nave and chancel, in 1887-88 by Thomas Nicholson & Son of Hereford.

REASONS FOR DESIGNATION:
The church of St Mary, Sutton Maddock, is listed Grade II* for the following principal reasons:
* It has a well-preserved tower dated 1579 which is a rare major church building of the later C16.
* The late C19 nave and chancel, by the prolific Herefordshire architect Thomas Nicholson, is almost entirely unaltered.
* Fittings include some good quality stained glass of the late C19 and early C20.