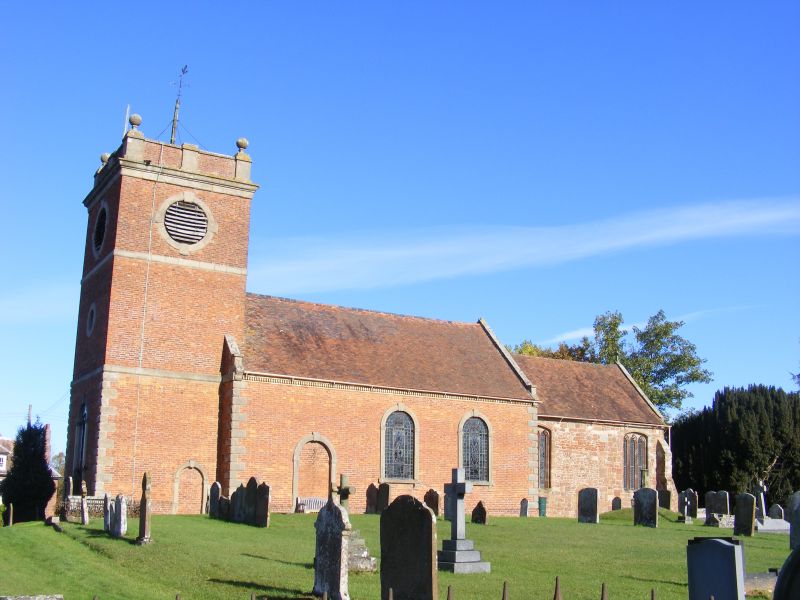 EXTERIOR: The chancel has angle buttresses and a 3-light E window with Perpendicular style tracery. Two 3-light S windows to the chancel with cusped lights. The S side of the chancel has a narrow round-headed doorway and evidence of a blocked round-headed window. The NE chapel has a NE buttress flush with the N wall of the church and a 1950s E window; 2 Decorated style traceried windows and a tall 3-light window with cusped lights to match those on the S side of the chancel. The remainder of the church is brick with windows with freestone frames with keyblocks and sill brackets. The N aisle and S side of the nave have opposed blind doorways to the W. 2 round-headed windows to the N aisle and the nave, the N aisle has a W end oculus window. The W wall of the aisle has a platband that extends round the tower, which is 3-stage with a moulded stone eaves cornice below the parapet which has pinnacles with ball finials. There are oculus belfry windows to each face, a clock face on the N side and a combined doorway/round-headed window on the W face with a plain oculus above.

INTERIOR: Rich in fittings of different periods and dominated by monuments of the Wolryche family. Plastered walls. Plain, narrow 1760s round-headed chancel arch on responds with capitals and similar arch from the N aisle into the N chapel. 3-bay N arcade with hollow chamfered octagonal piers with capitals and double quadrant mouldings to the 4-centred arches. The easternmost pier, which has been cut back and reduced in width has a curious abutment with the chancel W wall to provide a hagioscope between the nave and the NE chapel. 4-bay 3-truss king post and truss nave roof. This is very substantial with 2 tiers of purlins and no ridge and looks surprisingly early for 1763. Very fine chancel roof dated to the C14 in the church guide. It is uncollared with deeply-moulded rafters, a moulded wallplate and divided into panels by moulded cross ribs and into very small sub-panels by moulded sub-ribs. The lean-to roof of the N chapel is also medieval. The N aisle has a flat plastered ceiling. Reredos made up of pieces from a late medieval rood screen. Late C17 communion rails with turned balusters. 1860 encaustic tiles to the chancel. The choir has a dado of C17 panelling. C19 choir stalls with poppyhead ends and traceried frontals. Large C12 font with a circular bowl and a cable moulding above the stem. Early C17 polygonal pulpit with a carved text and carved blind round-headed arches. There is a freestanding timber lectern made up of Jacobean woodwork including an inscription and date of 1639. Good quality 1950s nave benches and fine Neo-classical W gallery with a frontal of fielded panels. Fine monument to Francis Wolryche, d. 1614 and his wife on the N side of the chancel. This has recumbent effigies in alabaster on a chest decorated with kneeling children. Spectacular monument in the N aisle to Mary Wolryche, d.1678 with a reclining female figure holding a lute on a chest below an inscription panel flanked by barleysugar columns and an open segmental pediment. 2 large stone chests with black marble lids in the N aisle commemorate Sir Thomas Wolryche, d. 1668 and Sir Francis, d.1689. c. 1707 marble Wolryche monument in the NE chapel with an inscription panel under a sarcophagus, crowned with a pediment. Unusual c. late 1920s plaque in the chancel to Henry Bazeley Wolryche-Whitmore, inspired by illuminated manuscripts and framed with gilded gesso. There are numerous other wall plaques to the family. Stained glass includes a Kempe window in the choir, an E window by Clayton and Bell and 2 matching early C20 window in the nave with classical detail to match the architecture of the windows.

SUMMARY OF IMPORTANCE:
St Andrew's is of more than special interest primarily for the richness and quality of its fittings and monuments in a church that, externally, combines some early fabric, plus a major 1763 brick phase including tower and N aisle walls.