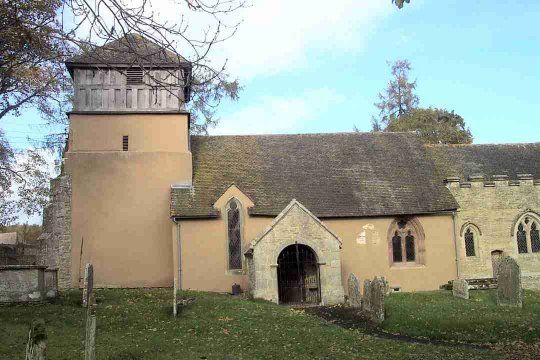 GV II*
DATES OF MAIN PHASES, NAME OF ARCHITECT: A church of C12 origin, with tower added later in the Middle Ages. The chancel was rebuilt, and a porch added, in 1589.

MATERIALS: Walls are mainly of brown render over stone, and of coursed siltstone with grey freestone dressings to the chancel and porch.

EXTERIOR: The chancel is an Elizabethan Gothic-survival work, with embattled parapet, coped gable and diagonal east buttresses. Its window designs recall those of c1300. The 3-light east window has intersecting tracery and hood mould. On the north side is a single cusped pointed window. In the south wall the right-hand window is 2-light with Y-tracery, and the left-hand is a single cusped pointed window. The priests' door has a Tudor head with sunk spandrels, and studded door with strap hinges. Early fabric is visible in the nave south wall, in the form of a blocked round-headed window. Other nave details are mostly C18 and C19. To its right is a 2-light window with plate tracery, and on the left side of the porch is a tall cusped C19 gallery window, carried above the eaves beneath a gable. The porch has coped gables on moulded kneelers. The round arch to the entrance has stone voussoirs and moulded imposts, with a modern iron gate. Inside, the nave south doorway is square headed under a massive unhewn lintel and has a panel door, probably of the C18. In the north wall of the nave is a high round-headed door of c1789, studded and with strap hinges, that gave access to the gallery. The north windows comprise a centrally-placed small, low cusped pointed window in place of a former north doorway and taller cusped pointed window to the left end. The short 3-stage tower has a diagonal buttress to the south-west angle. In the lower stage is a square-headed west window in a stone surround, and a tall narrow window above it, both with diamond glazing. The short second stage has small louvered openings in the west and north faces. The later bell stage is timber-framed with offset louvered square openings, and the pyramidal roof is on oversailing eaves.

INTERIOR: Walls are stripped of plaster, exposing a simple pointed tower arch with no enrichment and therefore not datable. The nave has a 3-bay tie-beam roof with raking struts and collar beams. The plain round C12 chancel arch is on moulded imposts, and flanked by lower and narrow squints, which have rubble-stone arches and are of uncertain date. The chancel has a C16 trussed rafter roof. The nave floor is laid with reclaimed medieval tiles and some re-used ledger stones, which are now illegible except for one dated 1800. The chancel floor is laid with C19 tiles and re-used ledger stones, ranging in date from 1688 to 1743. In the centre of the chancel floor are 4 further ledger stones in situ, commemorating members of the Mytton family from the period 1694 to 1756.

PRINCIPAL FIXTURES: The plain tub font is lead-lined and C12, and stands on a C19 octagonal base and plinth. The polygonal wooden pulpit is probably late C17, and probably contemporary with a reading desk that has similar but simpler panelled decoration. The altar rails, with twisted balusters and orb finials, are of c1700, and originally enclosed the altar on 3 sides but were adjusted in the C19 to span the chancel. Plain pews of 1905 have moulded tops and simple panelled backs. Choir stalls of similar date have plain ends with carved poppy heads, and simple panelled backs. In the south wall is a painted Royal Arms of George IV or William IV that was formerly fixed to the gallery. There are several memorial tablets, but the earliest memorial is a painted armorial board to Mary Mitton (d 1640) in the chancel south wall. A hatchment in the north nave wall is to Thomas More (d 1804), whose memorial tablet is beside it. The chancel has 4 neo-classical marble wall tablets to members of the Mytton family of Shipton Hall (dates of death between period 1737 and 1864, the latter by Dodson of Shrewsbury). Dodson also made the Gothic wall tablet in the chancel south wall to Thomas Mytton (d 1874). In the east window is a fragment of stained glass showing badges of Elizabeth I that was an integral part of the 1589 rebuilding. In the nave north wall is a C19 window showing the Baptism of Christ.

HISTORY: Shipton church is first mentioned c1110, and was probably a small 2-celled church until the tower was added at some time in the medieval period, and which contained 3 bells by 1552. The chancel was described as a 'great ruin' in 1553 and was replaced and rebuilt at the expense of John Lutwyche of Shipton Hall in 1589, as recorded on a brass memorial plaque in the chancel. The new chancel was probably built on the ruins of the old, with openings in the same position. The south porch appears to have been part of the same works. The exterior walls were rendered by 1789. The C18 gallery and C17 pews were removed in 1905-6 when a major re-ordering took place, at which time the walls were stripped of plaster and the present pews were installed.

REASONS FOR DESIGNATION:
The church of St James, Shipton, is listed at Grade II* for the following principal reasons:
* Rare and well-preserved chancel and porch in the Gothic-survival style of the late C16.
* Early medieval fabric, including C12 chancel arch.
* Fixtures of special historical interest, including C12 font, C17 pulpit and C18 wall monuments.