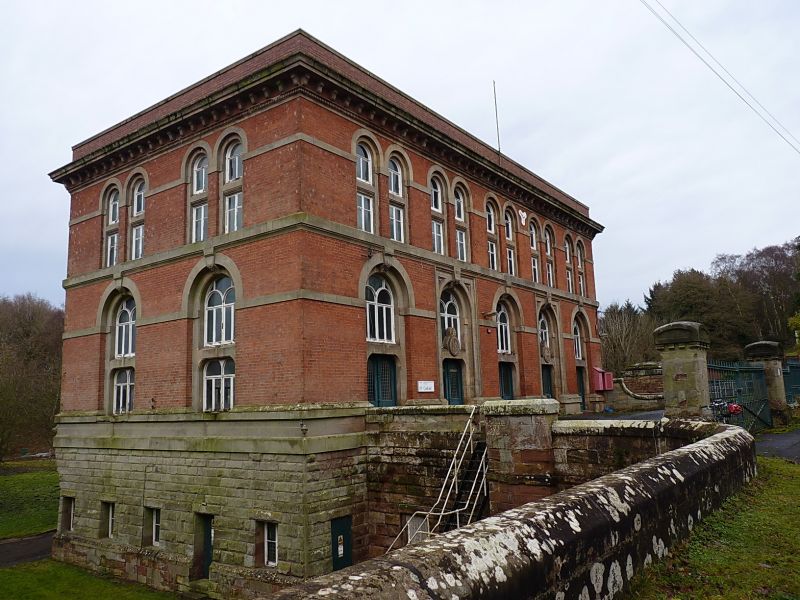 A water pumping station built in 1857 and extended in 1889 to the designs of JF Bateman for the Wolverhampton Waterworks Company.

A water pumping station built in 1857 and extended in 1889 to the designs of JF Bateman for the Wolverhampton Waterworks Company.

MATERIALS: red Flemish bond brick with sandstone dressings and a hipped, slate roof.
PLAN: one and two storeys with basement. Central entrance and staircase hall, with southern entrance, and engine halls to the east and west. The earlier part of the building included the eastern engine hall and the entrance hall. The western engine hall was added in 1889.

EXTERIOR: designed in an Italian Renaissance style with round-arched openings. There is a plinth of rock-faced stone with brick walling above. Projecting ashlar bands run across the front at the level of the springing of the arches and between the floors. To the top of the wall is a bracketed cornice with dentils to its lower body, above which is a brick parapet with stone coping. The south, road, front has five bays symmetrically disposed. To the lower body of the front are five tall openings with stone surrounds, which have pairs of half-glazed doors to their lower bodies and windows above. Above each of these bays are paired windows. The keystones to each of the lower arches are carved with a rope knot. The second bay from right has a stone inscribed with the date ‘1857’ and that in the second bay from left shows ‘1889’.

The fall of land means that the other three sides of the building have a deep, exposed basement storey. The east flank has two pairs of windows to the upper wall, divided by a later, C20, square chimney stack. There are blocked openings to the lower walling, which probably led to the original boiler house, which has since been demolished. The walling at basement level is brick. To the north face the basement level is of rock-faced rusticated sandstone. The bays above are similar to those on the southern, entrance, front, save that they have no doors. The west face has two bays with windows set in similar pattern to those on the south and north fronts.

INTERIOR: the entrance hall has a screen of two Roman Doric columns with a full entablature which supports the iron beams of the roof of the hall. Both engine halls extend through the full height of the building. The western basement is approached by an open well in the centre of the floor in the western engine hall. The original, western exterior wall now forms the interior east wall of the western engine hall.

SUBSIDIARY FEATURES: immediately in front of the southern front of the pumping station, and attached to it are two sections of walling which form a roughly rectangular enclosure. This has low, stone walls to its flanks. The eastern wall ramps up, where it joins the main building. A wide driveway cuts into the east side of the enclosure and leads down to the basement level of the pumping station on this side. To the southern side of the enclosure there are low, ashlar walls which support moulded iron railings which have ball and spike finials. The two gateways have square piers with domed caps.

The building of 1857 consisted of three bays facing north and south with two bays to the flanks. This was extended in exactly similar style in 1889 by a further two bays to the west. The station originally pumped water to Tettenhall from the River Worfe with a pair of Cornish rotative beam engines. A Lilleshall Cornish engine was installed in 1882 and two Hathorn Davy Cornish non-rotative engines were added in 1891. A pair of Joseph Evans horizontal duplex Cornish engines were installed in 1914, together with a steam turbine forcing pump. The present electric pumps were installed in the 1940s and the station ceased operation c.1970.

Two further, attached blocks are shown on the Ordnance Survey map published in 1902. These lay to the north and to the east of the present building. It seems likely, from the openings in the present eastern wall, that the boiler house stood to the east, but that this was replaced in the 1940s when electric pumps were installed.

Cosford Water Pumping Station is listed at Grade II for the following principal reasons:
Architectural quality: the building has considerable architectural presence, dependant on a careful application of proportions, specification of materials and the use of techniques in its construction;
Intact survival: although the original boiler house and steam–powered machinery have now been demolished and removed, the engine house retains all the essential elements of its notable architectural treatment as it was completed in 1889;
Group value: the Cosford engine house forms a group with Cosford Bridge (Grade II).