A Grade I Listed Building in Black Bourton, Oxfordshire 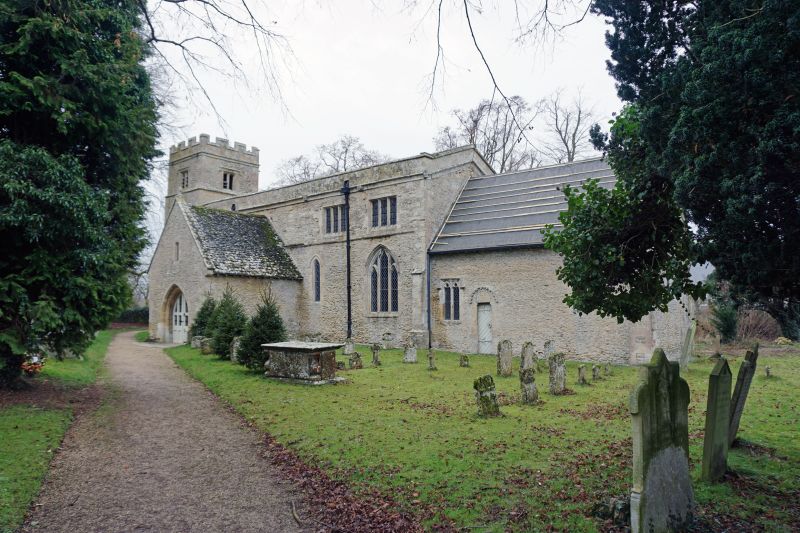 GV I
Church. Chancel is early C12 in origin, remodelled C13; nave and north aisle are
late C12, the nave with early C16 clerestory, the aisle much rebuilt 1866; C13
north chapel; C14 south porch; early C16 west tower. Church was re-roofed 1847
and then much restored 1866 by E.G. Bruton. Fine series of C13 wall paintings
revealed 1930's. Coursed rubble limestone, with stone slate roofs to chancel,
porch and aisle, and lead roofs to nave and tower. West tower was built over end
bay of nave, retaining lancet windows, that to west partly blocked and with
altered cusped heads. 2 upper stages are early C16 and have moulded ashlar
parapet, 2-light bell-chamber openings with Tudor hoodmoulds, and chamfered
rectangular lights below. Nave has 2 C13 lancets in south wall, and a C19
3-light window with simple cusped tracery. Early C16 clerestory has moulded
ashlar parapet with carved stone heads to string, and 3-light rectangular
windows with hallow-chamfered mullions. 3 windows to south, one to north. C14
south doorway with double hollow chamfer, in large gabled porch with double
chamfered arch and narrow light above. North aisle retains similar C14 doorway,
but otherwise rebuilt 1866 with lancet windows. North chapel has single lights,
arched to east, rectangular to north. Chancel has 2 C13 lancets with cusping in
north wall, another to south, and a C15-C16 lowside window of 2 cusped lights
with a Tudor hoodmould. East wall has a pair of small C13 lancets, linked by
single dripmould, and a single rectangular light above. South doorway of chancel
is early Cl2, much restored, with shafted jambs and semi-circular tympanum. This
is carved with a Maltese cross and has diaper ornament and heavy billet moulding
to border. Interior: C15-C16 door to tower, formerly south door, in moulded
depressed arch; Transitional north arcade of 5 bays, with chamfered arches
cylindrical piers and moulded capitals, 2 capitals scalloped, one with
quatrefoil ornament; chamfered square pier between west bays; C19 nave roof on
restored stone corbels with carved heads; another corbel between east arches of
arcade. East bay of arcade opens into north chapel which has trefoil-headed
piscina in east wall. Chancel arch is C13, with 2 hollow chamfered orders, the
inner on moulded corbels. To left of chancel arch, in east wall of nave is a
rectangular nich. Chancel has wide window splays with altered C15-C16 heads, C19
roof and window-seat sedilia, and aumbry and piscina in east wall. Piscina in
trefoil-headed and has carved foliage corbel. Wall paintings in nave are
mid-late C13. North wall has scenes depicting the Vesting and Martyrdom of St.
Thomas a Becket, the Tree of Jesse, St. Christopher, and the Baptism of Christ.
Painted roundels also feature the Coronation of the Virgin and Saints Peter and
Paul. South wall is painted with figure of St. Richard of Chichester high near
east end, and 2 figures of bishops and a hand of God above a painted roundel at
west end. Other scenes in jambs of central lancet and to left have painted
foliage friezes, and show The Angel appearing to Joseph, the Massacre of the
Innocents, and the Adoration of the Magi. Fittings: C12 cylindrical font on
square base with worn carved feet; semi-octagonal C15 stone pulpit with blind
tracery panels and brattishing; other fittings C19, with glass by Clayton and
Bell. North Chapel contains 2 good monuments: 1) to Elinor Hungerford, 1592,
with recumbent effigy in Corinthian tabernacle; 2) marble wall cartouche to
Anthony Hungerford, 1703, with richly carved military trophies.
(P.J. Randell: A History of the Church of St. Mary the Virgin, Black Bourton,
1986; Mary Lupton: A History of the Parish of Black Bourton, 1903)