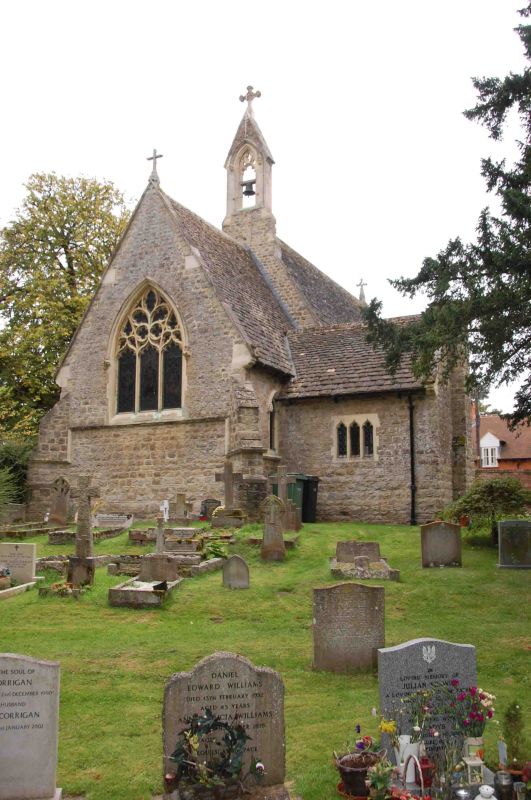 Find accommodation in
Dorchester on thames

Roman Catholic Church. 1849 by William Wilkinson Wardell for John Davey of Overy .Coursed squared limestone rubble with ashlar dressings; stone-slate roof Nave, chancel, north vestry and south porch. Decorated style. The one-bay chancel has a 3-Iight traceried east window and cusped single lights in the side walls. The small 2-light side windows of the 3-bay nave have a variety of flowing tracery and all hoods have carved head stops. The porch, in the centre of the south side, has richly-moulded doorway below a canopied statue of the Virgin and Child. The west wall has cusped single lights flanking a large canopied standing figure of St Birinus supported by an angel corbel. The gable parapets bear apex crosses and, over the chancel arch, a tall bellcote with a traceried opening. Interior: the contemporary fittings of the chancel include a painted and gilded panelled ceiling with an elaborate cornice, plus elaborately-canopied recesses for piscina and font in the south wall. The traceried wooden chancel screen carries carved rood figures, and the cancel arch has rich foliage capitals and a surrounding painted inscription. The contemporary glass in the chancel windows is by Ward and Nixon and there is one later stained-glass window in the nave. A rich and complete interior. Wardell was a friend of Pugin and later designed the R C cathedrals of Melbourne and Sydney.