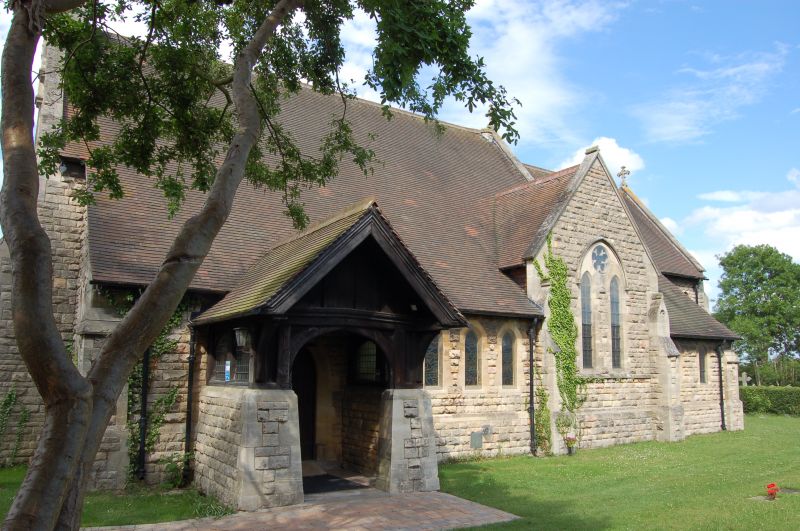 MATERIALS: The external elevations are built in Ancaster stone and the inside is lined with red brick. The roofs are covered with plain tiles.

It has a chamfered string course and coped gables with crosses. There is a single side wall stack and buttresses to the nave, chancel, south aisle and south transept. The windows are chamfered lancets and most have hood moulds with stops. The nave has 3 bays: its west end has a pair of central lancet windows with plate tracery, flanked by single plain lancets and the north side has a central triple lancet window flanked by a double lancet each side, with quatrefoil heads. Above the nave, there is a corbelled bracket carrying cross gabled bell turret with finial and cross and chamfered pointed bell opening. The chancel is of 2 bays and has a lean lean-to vestry to the north and a door with hood mould to the west. Its east side has a plain lancet window and the north side has 2 plain lancet windows to the west. The east end of the chancel has a double string course, an eaves band, 3 stepped lancet windows with liked hood mould, and a dedication tablet inscribed "To the Glory of God and in loving memory of Thomas Kenrick Hall, late vicar of Whatton. This church is built AD 1891". Its south side has 2 plain lancet windows with linked hood moulds. The south porch has battered plinth walls and timber framed superstructure with billeted bressumer, a four centred arched doorway, deep hood on brackets, and bargeboards. To each side it has 2 leaded lights with four centred arched heads. It has a common rafter roof with collars, and a chamfered and rebated inner doorcase. The south aisle is of 4 bays and has a double lancet window to the west end and 3 plain lancet windows to the east of the south porch. The south transept has 2 lancet windows with plate tracery. The lean-to organ chamber to the east of the south transept has 2 lancet windows to its south side and 2 to east.

The nave roof has strutted queen posts with drop finials, jowled double tie beams, arch braces and collars. The chancel has a matchboarded roof with corbelled eaves and arch braces. The south aisle has an arch braced lean-to roof with tie beams and the roofs to the vestry and organ chamber are similar. The nave, south aisle and chancel have a moulded sill band. The nave south arcade has 2 round ashlar piers with square chamfered plinths, moulded round bases, octagonal capitals, and chamfered and rebated brick arches. The north side has, to its east, a window with stained glass signed "P and Q 1956". The south aisle has a rebated pointed arch at the east end. The chancel arch is chamfered and rebated, and has chamfered and moulded square imposts, hood mould and stops. The chancel windows also have hood moulds and stops. The triple window to the east end has ringed shafts and carved spandrel and to the east of the south side there is a double window recess containing corbelled foliate piscina and a moulded stone seat. To its right is an arched opening to organ chamber. The north side of the chancel has an arched opening to the vestry and the east end has a panelled timber reredos dated 1955. Fittings include an ashlar and marble font with a water-holding base, a stem with 4 flanking shafts, and a square bowl with relief carving of net and fish; a cross to the east; an iron bound wooden cover; an octagonal oak pulpit with trefoil headed open panels, a cross foot and steps with braced handrail; a cross foot lectern with round stem; panelled oak stalls and desks with fretwork panels; linked chairs; a wooden altar rail on elaborate scrolled iron stands; an elaborate Gothic organ case; 5 ornate wrought iron pendant lamps and 2 similar lamps on brackets; and an iron bound poor box. Memorials include a wooden panel War Memorial dated 1954, 2 C20 moulded wood tablets and a C19 brass relating to the Marriott Charity.

REASONS FOR DESIGNATION DECISION:
This church is designated at Grade II, for the following principal reasons:
* It is a largely intact late C19 church.
* It was designed by the eminent Victorian architect, Sir Arthur Blomfield, who has a large number of listed buildings to his name.