A Grade I Listed Building in Babworth, Nottinghamshire 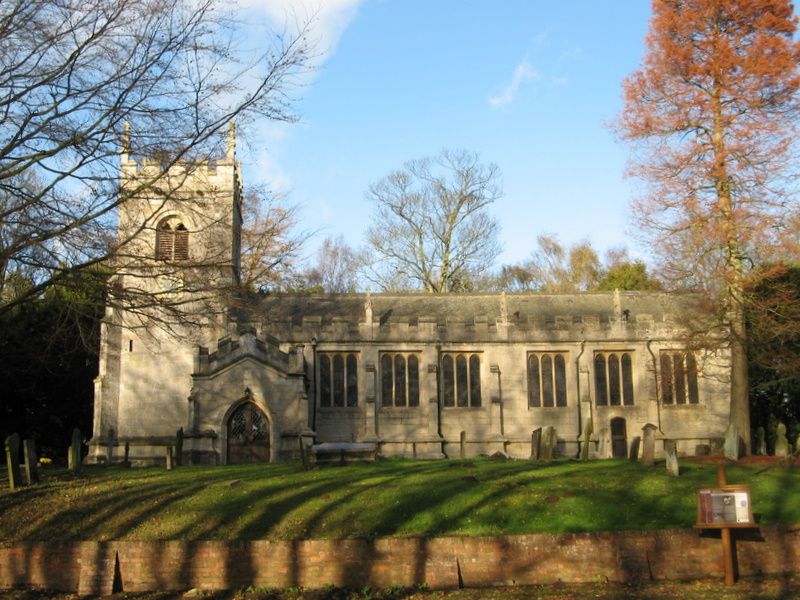 6/4 Church of
All Saints

Parish church. C15, C16, partially restored c.1860, restored
1878. Ashlar with slate roofs and single ashlar ridge crosses at
the east end of the chancel and at the west and east ends of the
north aisle. Butressed and set on a plinth with string course
running over. All parapets are embattled apart from the west
wall of the north aisle and the east chancel wall, guttering runs
under. Tower, nave, north aisle, north vestry, chancel and south
porch. The diagonally butressed tower of 2 stages with string
course at the juncture has a restored arched 3-light west window
with panel tracery and cusping. There is a hoodmould over and
string course under. The bell chamber has 4 arched 2-light
openings with cusping and hoodmoulds.There are small single fixed
lights to the west and south sides with a clock face under the
south bellfry opening. On the north and south sides are 2
gargoyles with single crocketed pinnacles at the angles of the
parapet. The restored west window of the north aisle is arched
with 3 lights, having panel and reticulated tracery with cusping
and hoodmould over. The diagonally butressed north aisle has 4
windows all under flat heads, with 3 arched lights to all but the
eastern most one which has 5 lights. Under the 2nd window in
from the east is a narrow C16 arched priest's doorway with wooden
door. The parapet has 4 crocketed pinnacles. The north wall of
the vestry has a single window under a flat head with 3 arched
lights, there is a single crocketed pinnacle. The east vestry
wall has a similar window. The diagonally butressed chancel has
a 5-light arched window with panel and reticulated tracery and
cusping. There are single crocketed pinnacles at the 2 corners.
The south wall has 6 windows under flat heads, each with 3 arched
lights. Under the window 2nd from the east is a narrow C16
arched priest's doorway with wooden door. There are 4 crocketed
pinnacles. The diagonally butressed south porch with moulded
arched entrance has C20 ½ glazed double doors with C20 iron
lamp over. The interior porch roof has stone transverse arches
supported on stone corbels. The interior doorway is arched and
has a wooden door. A 3 bay arcade separates nave and aisle,
having octagonal columns, moulded capitals and chamfered arches.
Single carved grotesque heads replace responds. The chamfered
tower arch supported on corbels has a C19 gallery under. The
chamfered chancel/north aisle arch is supported on corbels, there
is an arched doorway leading to the vestry. In the south wall of
the chancel is a piscina with chamfered surround. In the north
aisle, south wall, is a small arched niche through to the nave.
The font, pulpit and lectern are Cl9. There are several
decorated wall tablets. That to Catherine and Lidley Simpson,
1773, has a small coloured and decorated shield on the apron and
is surmounted by a decorated urn. William Simpson and his wife
Frances, 1768, this has a sarcophagus with decorative scrolls
over, supporting an obelisk bearing the inscription and a carved,
coloured and decorated shield. The tablet to John Simpson and
family, 1727, is topped with an open segmental pediment
containing a blank shield which is decorated around its outside
edges and flanked by single cherubs heads with a small urn over.
There is a sarcophagus set on to the ground of the monument to
Arthur Bridgeman Simpson, 1827. That to Revd John Simpson,
1784, consists of a long horizontal rectangular tablet, topped by
a decorated urn. This is signed by Waterworth. To Honble Anna
Maria Vane, 1759, is an inscribed tablet under an arched head,
with foliated scrolls along either side. The congregation became
Separatist on July 11 1586 when Rev Richard Clyfton became
Minister, he was deprived of his living in 1604. William
Brewster and William Bradford worshipped here until the Separa-
tist Church was formed at Scrooby in 1606 when they and Clyfton
moved there. Clyfton escaped to Amsterdam in 1608 and died there
20th May 1616. A street in New Plymouth Massachusetts is named
after him.