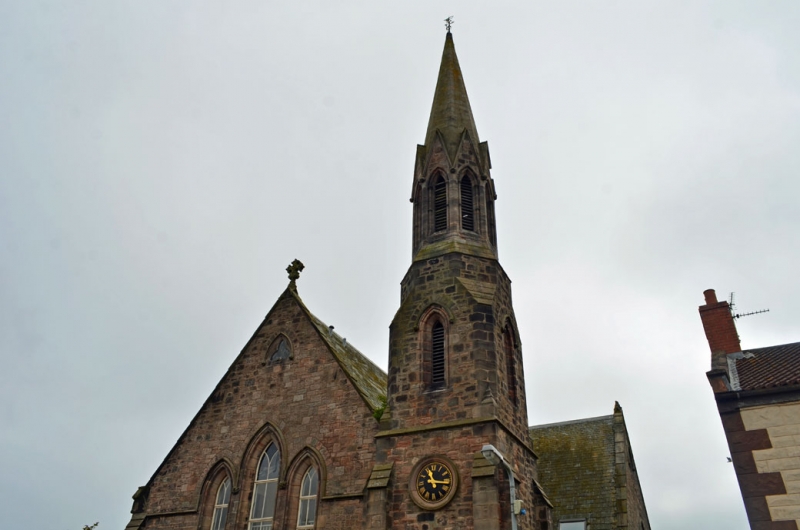 Designed by John Howison and built 1857-8. Became redundant in 1989 and converted internally as an adult training centre.

PLAN:
Cruciform: an aisleless nave with broad, shallow transepts, a SW tower with spire, and a chancel with N and S vestries.

EXTERIOR:
The church is an Early English style. The tall (91') and very slender spire is an important part of the local townscape. The spire is polygonal and stands above a small, two stage tower at the SW end of the nave, creating a picturesque effect. The tower has a W door and buttresses against the lower stage only. The church has lancet windows throughout, with a group of three lancets at both the E and W ends. The W end is the show front, with the tower and nave W gable forming a good composition. The transept N and S facades are similar to the W end of the nave; the N transept also has a N door.

INTERIOR
The interior has been subdivided to provide adult education facilities. The roof has arch-braced collars on each bay. At the centre, where transepts and nave intersect in a crossing, semi-circular trusses meet in a dramatic fashion. The chancel arch is in an Early English style, and has a continuously moulded outer order and an inner order on attached shafts with moulded bases and capitals.

HISTORY
The church was notable for being the most northerly in England. Built in 1857-8, probably to designs by John Howison, a local architect about whom relatively little is known. The fanciful and inventive, but not particularly historically accurate, use of Early English motifs is unusual by this date, when more 'archaeologically correct' styles were preferred. The dedication is taken from one of Berwick¿s four medieval churches, demolished in the reign of Mary Tudor, but that church stood on a different site. It cost £2,500, of which £2,000 was given by a Captain Gordon, and was intended to serve the growing population of Berwick, especially in the north-east part of the town, then being extensively developed. It became redundant in 1989 and was converted for use as an adult training centre. As part of this work, floors were inserted and dormers put into the roof.

REASONS FOR DESIGNATION
The former church of St Mary, Berwick upon Tweed, is designated at Grade II for the following principal reasons:
* Early English in style, in an unarchaeological fashion late for its date, it possesses architectural presence and character.
* The spire is an important part of the local townscape, and the church plays a key part in the mid C19 growth of the town.
* In spite of major re-working, the interior retains elements of note.