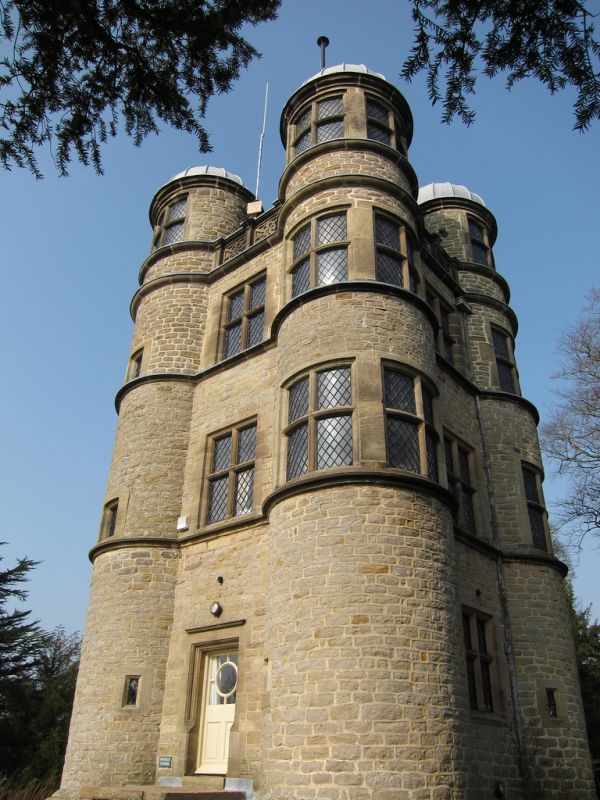 PARISH OF CHATSWORTH CHATSWORTH PARK
SK 2670
6/86
12.7.67 The Hunting Tower
II*
Look-out or hunting tower, also known as The Stand. c1582,
possibly by Robert Smythson. Coursed squared sandstone with
ashlar dressings. Lead roofs. Square in plan with circular
angle turrets. Three storeys, the turrets rising to four
storeys. Chamfered plinth. Moulded first and second floor sill
bands and a pair of moulded bands defining the parapet. Moulded
cornices to the turrets which have domed roofs. The corner
turrets have paired cavetto moulded stone cross windows to
first, second and third floor, except the south west turret
which has them only to the top, as it contains the staircase,
which is lit by two small square windows with recessed and
chamfered surrounds. To the south a broad flight of nine stone
steps leads up to the entrance which has flat arch, stop moulded
surround and hoodmould. Half-glazed door. Cross window above
and above again. To the north and east are three tiers of
similar cross windows. Some plainly chamfered. To the west are
two single light transomed windows with recessed and chamfered
surrounds, to the first and second floors. In addition the
north and west sides have a blind 2-light recessed and chamfered
mullion window to the basement. To the east are steps down to a
basement entrance. Small rectangular windows to the lower
stages of the towers. All the windows have diamond leaded
lights. Interior: Ashlar chimneypiece to the ground floor room
may be C16. Similar but plainer one above and above again.
Spiral stone staircase. The turrets have domed ceilings with
moulded decorative plasterwork, probably by Abraham Smith.
Sources: Mark Girouard Elizabethan Chatsworth. Country Life
22 November 1973, pp 1668-1672. The Gardens and Park are
included on the Gardens Register at Grade I.