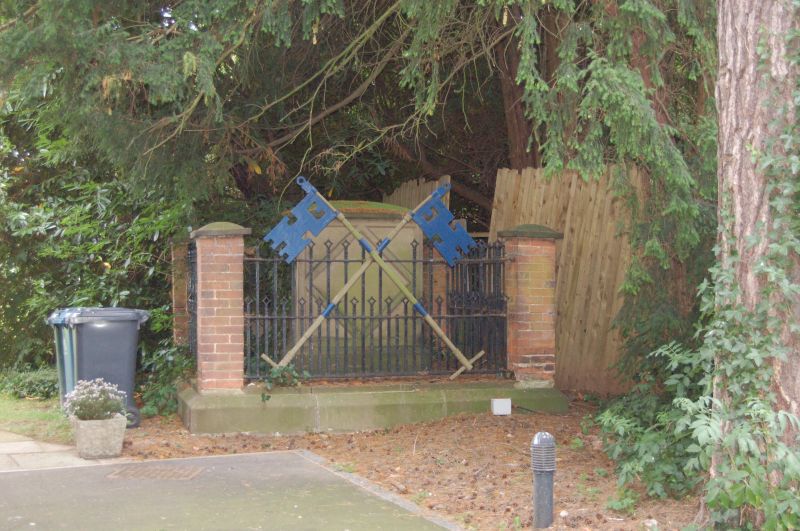 Parish church and adjoining wall. C13, rebuilt c.1812, 1908. In
the main stucco, some red brick and ashlar. Slate and lead
roofs, the nave being hipped to the east. Buttressed and, apart from
vestry, set on a chamfered ashlar plinth. Tower, nave, aisles,
south vestry, south mausoleum and chancel. North west single
stage ashlar tower with single diagonal buttress to the north.
Stepped battlements. West wall with doorway with deep stepped
reveal and Cl9 door. Above, to the west, north and east sides
are single openings each with 2 arched lights under a flat arch.
The bell chamber has 4 triangular arched openings each with 2
similarly arched lights. To the right of the tower and slightly
set back is the red brick gabled west end of the nave with bands
following the line of the gable. Arched doorway with plank
double door. Either side are single casements with lozenge
glazing bars. Above is a single triangular arched casement with
decorative glazing bars. The north aisle has 2 arched 2 light
windows each with Y tracery. The clerestory has 3 two light
windows, the eaves are decorated with a stepped band. The north
chancel has 2 arched windows each with 2 arched lights. The east
end has a single arched 3 light window with intersecting tracery.
The diagonal buttresses terminate above the crow-stepped parapet
in single obelisk finials. The south chancel wall has a single
arched window with 2 arched lights. To the left is an attached
octagonal brick buttress rising to a rendered octagonal buttress
and terminating in an obelisk finial. The east wall of the
embattled mausoleum has a single round arched blind panel.
Attached to the left is an embattled 5 bay arcaded wall,
origianlly a cloister, with chamfered arches divided by single
buttresses which terminate in obelisk pinnacles. The single
right bay is now blocked, is incorporated in the vestry and has a
single small glazing bar casement. The wall is attached to
Roclaveston Manor listed as a separate item. The south wall of
the vestry has a doorway with plank door and single glazing bar
casement to the left. The west wall has a single similar
casement. The south wall of the aisle has 2 tall 2 light
windows. The west wall is at an oblique angle and has a single
small light. The clerestory corresponds to the northl.
Interior. Restored 3 bay C13 nave arcades with circular columns
and responds, moulded capitals, double chamfered arches and hood
moulds. Moulded tower arch, part blocked and with domestic
chamfered arched doorway flanked by single fixed lights. Over is
a gallery being the squire's pew with fireplace. Moulded chancel
arch supported on either side by single pilasters. The south
chancel wall has a single blocked 2 light window to the west. To
the east of the south aisle is the 1812 Pendock Barry Mausoleum.
South aisle/mausoleum chamfered arch with good decorative wrought
iron screen with gateway. 3 further chamfered arches with glazed
ceiling. Extending between the top of the outer 2 arches are
small bands of 5 bay blind arcading. Between the 2 central
arches are single chamfered arched niches each with single carved
figure. Below are further single larger niches each containing a
single decorative memorial obelisk. On the east wall is a
decorative memorial to Susanna Pendock Barry, d.1811, in whose
memory the mausoleum was built. The walls are further decorated
with small shields. In the south wall is a doorway to the
vestry. all ashlar shaft piscina, the shaft decorated with
diaper, the bowl with scrolls. Some C18 floor slabs in the
chancel, single C17 floor slab in the south aisle. Remaining
furniture C19 with wooden pulpit and 2 octagonal ashlar fonts.
There are 6 hatchments. Under the gallery is an inner west porch
with 2 rooms formed by panelled screens.