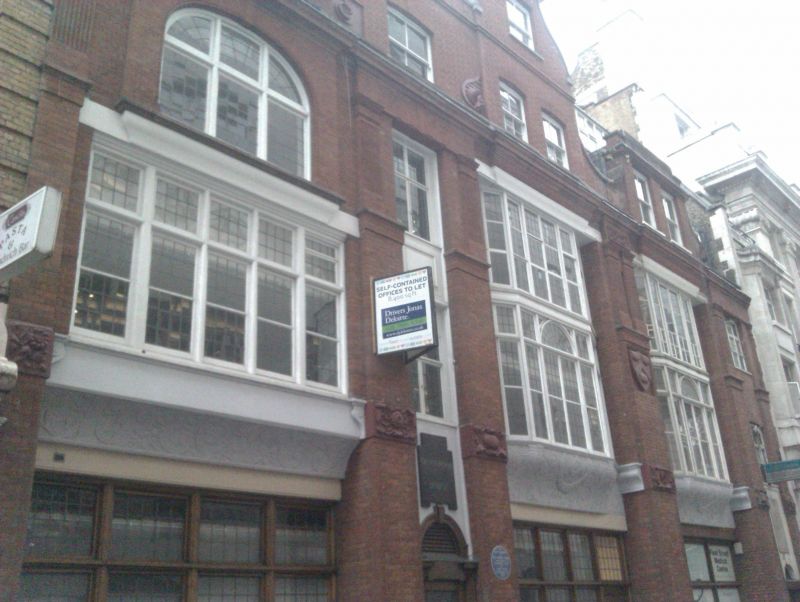 Commercial chambers. 1878. Alexander Peebles architect, carving by Smith and Finlay. Brick in English bond with rubbed brick and terracotta dressings; wood bays with pargetting to bases. Hipped roof of slate. Three storeys over basement and five-window range, articulated into three major and two minor bays by giant brick piers. Queen Anne Revival style recalling Shawls New Zealand Chambers, Leadenhall Street of 1873 (demolished). Pair of round-arched entrances in minor, that is second- and fifth-window ranges. Wood insets to ground floor renewed but to an original design. Terracotta plaques at sills of first-floor windows, sunflowers, scrolls and a bust in three-quarter relief. Brick piers become fluted pilasaters at second floor. Pier between third- and fourth-window ranges has shield with three tuns; Tuscan pilasters above are doubled. Projecting cornice to second floor, becoming full entablature over entrance ranges. First-, third- and fourth-window ranges filled with two-storey bays to upper floors, rectangular in two stages to the former an shallow canted to the second two; most of original glazing intact. Flat-arched windows to inset entrance ranges; second-floor window, first-window range is elliptical arched. Each bay range terminates in a Dutch gable dormer; that to fourth-window range has lost top of gable. Originally each dormer with volute brackets to crescent moon parapet; obliterated in filling in and heightening of top storey. All dormer windows segmental arched except for fourth-window range which contains a pair of flat-arched windows. Roof with second tier of dormers rebuilt. Stacks to interior fire walls and party walls. Blue plaque attached notes that the first edition of the "Sunday Times" was edited at no.4 Salisbury Court by Henry White, October 20, 1822. Similar ranges which were designed by Peebles and ran to corner, then along Fleet Street, have been demolished.