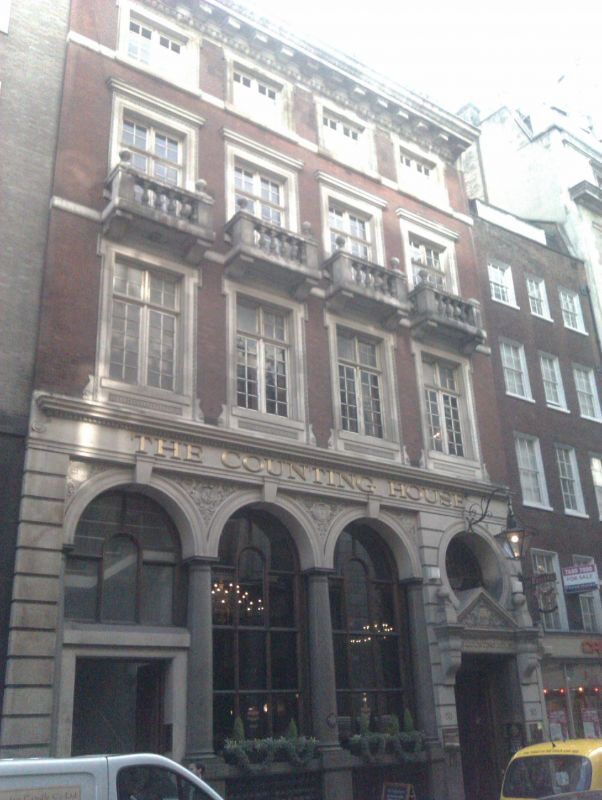 CITY OF LONDON, LB
CORNHILL
No.50 and attached grilles

Four storeys and attic over basement. Top storey recessed behind a balustrade, again not visible. Flat-arched entrances in outer ranges, that to left set in tall ground-floor arcade of three bays, the arches carried on attached to Tuscan columns on high socles and responds. Entrance to right with round window overlight which is partly obscured by pediment and spandrels of the arcade; this entrance set in short wall treated as banded rustication. Entablature to ground floor with high broad frieze-sign fascia. Storey band between first and second floor. Sill band to attic. First-floor and attic windows with eared architraves; lower spandrels to the former with guilloche bands; second-floor windows have architraves and entablatures. Heavy balconies to second-floor windows. Heavy dentil and modillioned cornice to attic; urn to right party wall and stack behind. Decorative security grilles to basement windows.

INTERIOR: Banking hall reaches to rear of site and is as broad as the building. Illuminated by glass dome on pilastered low drum. Walls with pilasters and panels of Derbyshire alabaster, and Spanish mahogany dado and cornice, with counters of the same hardwood; all features of original design. To east wall a panelled gallery. Entrance vestibule with pilasters and alabaster facing.Let into the white marble mosaic floor at time of completion were 'signs' of the four different banks united to form the new company 'Cornhill, 1762'; 'Threadneedle Street, 1766'; 'High Street, Bath, 1770'; and 'Corn Street, Bristol, 1750'.

A 1914-18 War Memorial in bronze to west wall of vestibule. Doors of an original design.

Sub-basement reported to retain elements from the Roman Wall, discovered when the building was constructed and retained in situ.