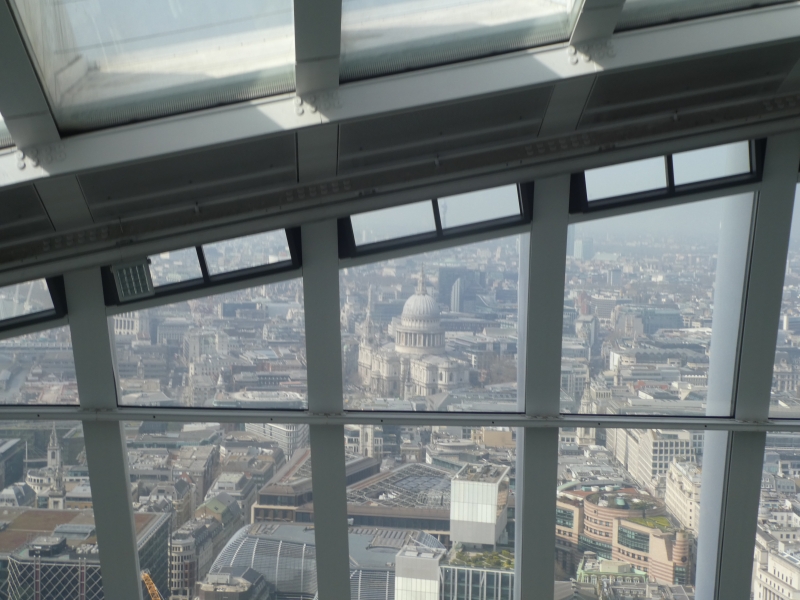 First World War memorial, erected in 1920 by the Parish of St Michael Cornhill and designed by sculptor Richard Goulden.

The war memorial abuts the western pier of the porch of the Church of St Michael Cornhill (Grade I-listed). The pier dates from Sir George Gilbert Scott’s 1857-60 remodelling of the Wren church and forms the lowest stage of the tall Gothic tower of 1715-22.

The memorial consists of a narrow, tapering Portland stone pedestal on a deep plinth, the latter set at the height of the plinth of the adjacent Gothic porch and with a matching hollow-chamfer moulding. Above is a bronze sculptural group surmounted by the youthful figure of St Michael the Archangel, the parish church’s patron saint and symbol of the triumph of good over evil.

The Archangel, wings upstretched, holds a blazing sword aloft; below, to his right, is a pair of ferocious lions, one beast sinking its teeth into the head of the second. To his left is a cluster of four naked infants gazing upwards, seeking St Michael’s protection. In its report of the unveiling ceremony, The Times explained that St Michael was ‘repelling Strife in the form of two beasts tearing one another as they perish, and leading in Brotherhood and Love in the form of a group of children.’ (1920). The Builder noted that ‘they [the beasts] slid slowly, but surely, from their previous paramount position. Life, in the shape of young children, rises with increased confidence under the protection of the champion of right’ (1920).

Affixed to the front, a bronze tablet with sunken relief lettering reads DURING THE/ GREAT WAR/ 1914 - 1919/ THE NAMES WERE/ RECORDED ON THIS/ SITE OF 2130 MEN/ WHO FROM OFFICES/ IN THE PARISHES OF/ THIS UNITED BENEFICE/ VOLUNTEERED TO/ SERVE THEIR COUNTRY/ IN THE NAVY AND/ ARMY + OF THESE/ IT IS KNOWN THAT/ AT LEAST 170 GAVE/ THEIR LIVES FOR THE/ FREEDOM OF/ THE WORLD.

The aftermath of the First World War saw the biggest single wave of public commemoration ever with tens of thousands of memorials erected across England. This was the result of both the huge impact on communities of the loss of three quarters of a million British lives, and also the official policy of not repatriating the dead: therefore the memorials provided the main focus of the grief felt at this great loss. One such memorial was raised at the Church of St Michael, Cornhill, as a permanent testament to the sacrifice made by the members of the local community who lost their lives in the First World War.

The memorial commemorates the City employees who worked within the parish of St Michael Cornhill which, since 1906, has incorporated the adjacent parishes of the demolished churches of St Peter le Poer and St Benet Fink. Designed by RR Goulden, the memorial’s bronzework was cast by AB Burton of Thames Ditton. The memorial was unveiled by the Lord Mayor of London, James Roll, at a ceremony held on 1 November 1920, at which a short service was conducted by the Rector, Reverend JH Ellison, with the Archdeacon of London. The names of the fallen are recorded separately on a framed Roll of Honour inside the church. More than 2,000 men who worked in offices in the united benefice had volunteered for military service during the First World War, of whom c170 died.

Richard Reginald Goulden (1876-1932) was born in Dover. He studied at the Dover School of Art and then took architecture and sculpture at the Royal College of Art in London, and was a student of Professor Lanteri. He was chosen to produce the figure of GF Watts for the façade of the Victoria and Albert Museum and his notable public memorials include the Mrs Ramsay MacDonald memorial seat (Grade II-listed) at Lincoln’s Inn Fields (c1911). In 1914 he produced the statue of Andrew Carnegie. During the First World War he served in France as a Captain in the Royal Engineers. Following the war Goulden executed a number of sculptural war memorial commissions, a number of which are listed, including for the Bank of England (1921), Brightlingsea (1921), Middlesex Guildhall and Hornsey County School (1922), Gateshead (1922), Malvern (1923), Crompton (1923), Dover Maison Dieu House (1924). His architectural as well as sculptural skills, in addition to his Royal Engineers training, enabled him to design both the sculptures and pedestals of his memorials, as well as to survey and lay out sites ready for their erection.

St Michael’s, Cornhill War Memorial, is listed at Grade II* for the following principal reasons:
* Historic interest: as an eloquent witness to the tragic impact of world events on this community, and the sacrifices it has made in the conflicts of the C20;
* Sculptural interest: a powerful and finely modelled composition by the distinguished sculptor Richard Goulden;
* Group value: with the Church of St Michael, Cornhill (Grade I).