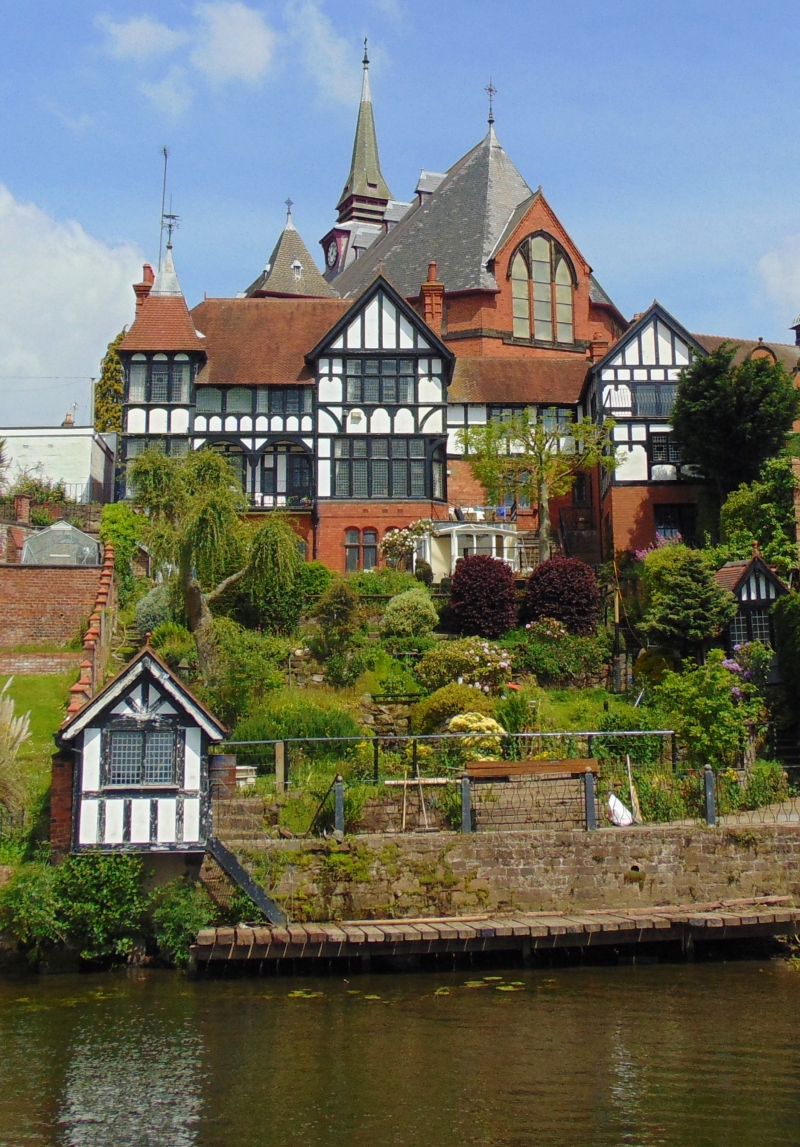 Parish church. 1876 and 1902-5. By John Douglas. Stone-dressed
red brick and timber framing with brick and plaster panels
with grey and grey-green slate roof. Through nave and chancel
of 4 bays plus apsidal bay 1876; outer south aisle 1902 and
clock-housing on spire 1905.
PLAN: the nave and original aisles are under a single broad,
steep roof with impressive full-width apse, east, and gable,
west.
EXTERIOR: the west end has a gabled ashlar porch with lantern
on pier between two 20-panel doors surmounted by 5 lancets in
recessed arched panels; the rest is stone-dressed brick, with
chamfered, pinnacled buttresses articulating nave and aisles;
3 large lancets above porch; clock-face in cusped stone
surround near apex of gable. Set back slightly, a 2-storey
porch to west gallery stair, north, balances the hip-roofed
apsidal baptistry, south, with a cusped lancet to each face.
The outer south aisle, separately roofed, has grey-green
slates like the baptistry. The ground slopes down steeply to
the east: open undercroft of increasing depth to outer aisle
on wall to canted west end and 3 brick piers supporting
aisle-floor bressumer on timber longitudinal arches;
brick-panelled close studding below sill-rail; a cross-window
in canted west end; 3 mullioned and transomed 5-light windows,
each with an upper band of glazed quatrefoils; 2 panels with
centre-rail between each pair of windows have lozenge bracing.
The eaves are coved with plaster panels. The eastern apse has
a pair of small windows in recessed lancet-panels to each face
of crypt; moulded brick floorband and stone sillband; 3-light
east window; 4 cusped lancets in each oblique face.
Continuous roof over nave, original aisles and apse with west
belfry spire rising from roof showing Douglas's concern for
solid geometry: truncated pyramid beneath triple band of
bell-openings with slated louvres; probably 1905 clock on
south face; broach spire. The roof of the 1902 outer south
aisle has a hipped west end and a blunt pyramidal spire at the
east end. The main roof has 3 hipped lucarnes on each slope
and a "lean-to" lucarne on north face of spire.
INTERIOR: structural carpentry of pine. 4 very tall octagonal
aisle-posts to each side of nave support mid-slopes of roof;
arch-braced collar-beam trusses with crown posts to nave;

arched trusses to aisles. Steeply-sloped west gallery.
Stone-banded cruciform brick piers to south-west baptistry and
outer south aisle. Boarded floors. Plaster ceiling with all
rafters and quadrant-braced purlins exposed, including to the
apse which forms the presbytery.
The walls are decorated with stencilled patterns in Arts and
Crafts manner, graduated upward from dark to light colours,
Douglas's symbol for earth and heaven. Decorated organ to east
of south aisle; wrought-iron chancel screen; low oaken screen
to south bay of apse used as vestry; oak desk and pine pews
probably by Douglas.
Stained glass in most windows, 1881-1920, in the Baptistry by
Frampton, in the north aisle by Kempe and the rest by Morris
and Co., with good east window 1881, south-east window 1881
and east window of south aisle 1887.
HISTORICAL NOTE: this was Douglas's own parish church and he
designed its internal decoration, probably in 1902. It
illustrates his mastery of timber framing and spatial
articulation on a grand scale. Considered by Pevsner to be the
boldest of Douglas's church designs. Amongst his Germanic
buildings it comes nearest to a Rhineland setting, seen from
the liturgical east across the Dee, crowning a picturesque
group of buildings on steeply rising ground.
(The Buildings of England: Pevsner N & Hubbard E: Cheshire:
Harmondsworth: 1971-: 35;172-173; Hubbard E: The Work of John
Douglas: London: 1991-: 125-6;128;201;247).