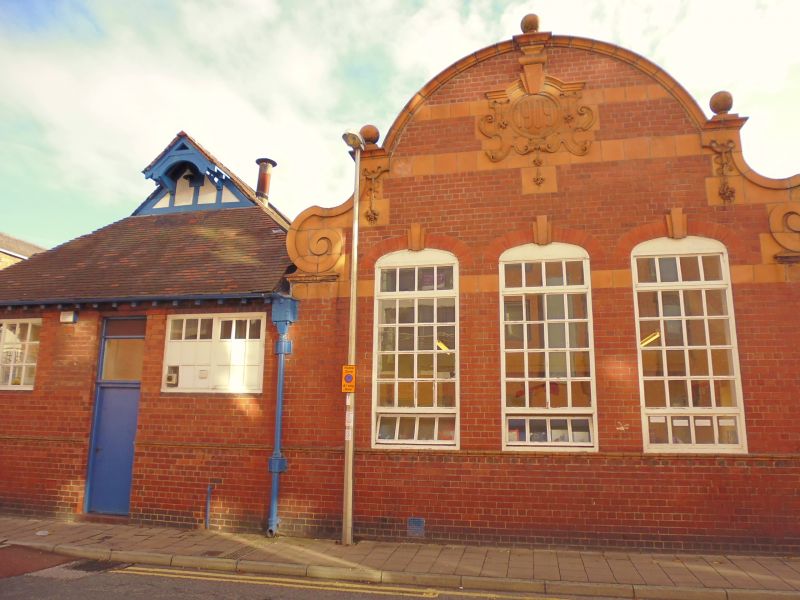 Primary school, playground shelter and railings with gates,
facing Egerton Street, Albert Street and Crewe Street.
1909-10. By John Douglas and WT Lockwood. For Chester City
Council. Red brick with yellow terracotta dressings and brown
tile roof.
EXTERIOR: one and two storeys. The entrance front, north, to
Albert Street has double doors with 2 bolection panels beneath
circular glazed panels of 6 panes, fanlights of square panes
and round-arched terracotta hood on consoles, at west end of
2-storey north-east wing. East of the entrance three 12-pane
hopper windows. The second storey has four 15-pane sashes; the
semicircular gable with terracotta bands, moulded coping and
ball finials has a 9-pane circular window in an ornate
terracotta surround. The west wing has a 16-pane hopper, three
24-pane hoppers under a half round gable with terracotta
dressings, two 16-pane hoppers, a 24-pane hopper under a
half-round terracotta-dressed gable and a 16-pane hopper.
The west face to Egerton Street has 2 parallel wings at
right-angles to street. The north wing has dual 9;9 pane
hoppers to each side of a replaced door with simple overlight;
a hipped roof surmounted by a cantilevered timber belfry on a
timber-framed gablet. The south wing has three 24-pane hoppers
under a half-round terracotta-dressed gable with volutes,
bands, ornate cartouche, moulded coping and ball finials.
The south front to the playground has replaced metal glazed
double doors with sidelights; next, a brick and timber-framed
lean-to-roofed porch with half-glazed door at back and a pair
of half-round terracotta-dressed gables, each above three
24-pane hoppers, with volutes, bands, 9-pane round
gable-window, in ornate surround, ball finials and moulded
copings. The south end of the 2-storey east wing has altered
lower storey, two 12-pane hoppers to upper storey and hipped
roof.
Main windows are basket-arched and have terracotta keys;
cast-iron rainwater pipes and heads; eaves have exposed
rafters; 4 shaped chimneys.
The playground shelter also serves as a covered entrance from
Crewe Street, south. Half-gable to Crewe Street with
terracotta basket arch over ornamental cast-iron gate;

terracotta bands. 2 tapered cast-iron columns with moulded
capitals carry the roof, hipped to north-west, with rafters
and boarding exposed.
INTERIOR not inspected.
A good and complete example of the Edwardian schools built by
Chester City Council, complete with shelter and iron railings
with brick and terracotta plinth and piers, visible from all
sides from the surrounding streets.
(Hubbard E: The Work of John Douglas: London: 1991-: 204;
276).