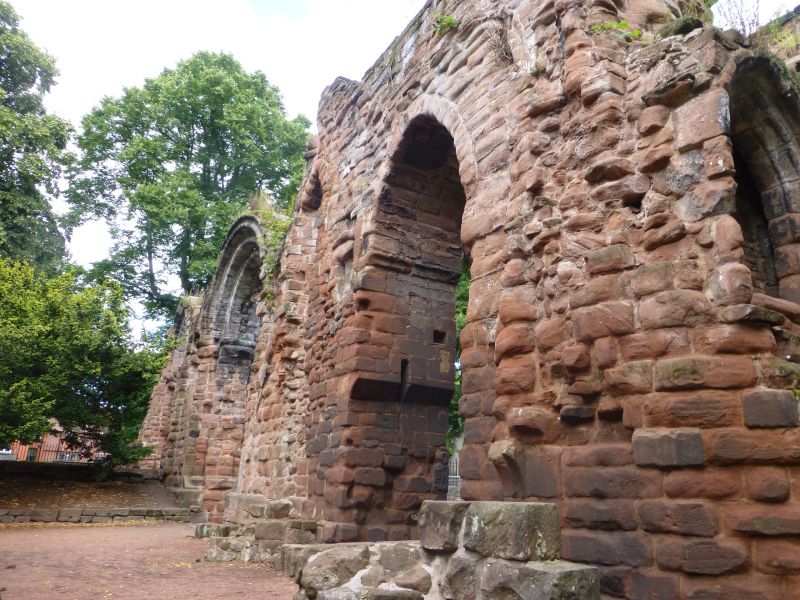 The 3-stage north-east belfry tower by Douglas has flat corner
buttresses to the first stage, with vice at north-east corner;
stair loops and small lancets; the vice has an oak boarded
door on wrought-iron hinges in arched opening; the massive oak
bell-frame is expressed as a 3-panel bell-opening to each
face; a short steeple with 2-stage roof, each with belled
eaves, the upper stage oversailing the lower stage. The east
end has a stilted tripartite window, a broad stilted
round-arched light flanked by lower, narrow lights, 1863 by TM
Penson; large stepped buttresses, that to north pre C19;
eaves-level stringcourse; coped gable.
East of the present church the south side wall of the former
chancel is visible at ground level, with badly eroded red
sandstone arches of the east bay and former north-east and
south-east chapels rising nearly to full-height; the Lady
chapel arch is Romanesque, the others probably C13. The
retro-transepts far east, which had 3 chapels, have floor
substantially lower than the chancel. The supposed chapter
house and former upper chamber immediately south-east of the
crossing has diminishing buttresses and lancets, now not
glazed; the surviving lower part of the walls to the upper
storey indicate the openings for former windows; a vice at
corner of chapter house with south transept. Medieval
stonework below sill of south transept window, refaced above;
a Tudor-arched 3-light transomed window with cusped heads to
upper lights. The south-aisle wall to the nave was rebuilt
C19; broad lancets; double oak-boarded doors in archway with
stiff-leaf colonnettes; the refaced clerestory has broad
lancets alternating with arched panels, all with colonnettes;
pinnacles at corners wherever RC Hussey rebuilt or refaced.
C19 triple lancets in west end of nave, above the narthex.
INTERIOR: the 4-bay nave has simple probably late C11 arcades
with plain circular columns on cruciform bases; varied
scalloped capitals and twice rebated voussoirs; triforium
c1190 has 4 arches on bay piers with 5 attached colonnettes
and intermediate piers with 3 colonnettes; the early C13
clerestory repeats the triforium rhythm, but with mouldings
more developed. The arcade columns lean outward and westward;
the angle of lean which increases from crossing to third
columns, then begins to decrease, is carried up through
triforium and clerestory; the present height above floor level
of successive pairs of columns suggests that, until RC
Hussey's restoration, the nave floor sloped upward towards the
crossing. The diagonal lean of the arcade columns is evidently
deliberate. The plinths on which they stand have vertical
sides and, beneath the recessed padstones, level tops; the
padstones are tapered from inner east corners to the outer
west corners, to give appropriately sloping beds for the

columns. Roofs to nave and aisles were renewed 1859-66. The
side wall of the south aisle is rebuilt; colonnettes in the
reveals of north aisle windows appear to be angled outward in
relation to the wall-face, to accentuate the upward
broadening. The east column of the south arcade has suffered
some subsidence; damaged medieval painting on east column of
north arcade.
The crossing, approximately contemporary with the nave, has
oblong piers with inner corners rebated to receive attached
shafts; 3 half-round shafts on north and south faces, 2 on
east and west faces; simply-moulded arches, those to nave and
chancel wider and less than semicircular, those to transepts
slightly horseshoe; roll-moulded aisle arches to nave and
chancel, the sides broadening in a slight curve as they rise.
The drastically shortened transepts have C16 end walls. The
now one-bay chancel was damaged supposedly by the fall of the
central tower c1470. The north side of the chancel has
roll-moulded aisle arch, blocked 1886 by vestry wall; blocked
Romanesque triforium arch on very short respond with scalloped
capital; the stonework above is rebuilt. The south side has
roll-moulded aisle arch with fragment of triforium respond
above, and upper stonework rebuilt. Doorway c1300 to former
supposed chapter house which, like the ruined bays of chancel
and Lady chapel, has floor level substantially lower than the
crossing; a chancel crypt may have been intended. The chapter
house has an octagonal central pillar carrying a quadripartite
vault of 2 x 2 bays on wedge-section ribs.
STAINED GLASS: west window glass by Edward Frampton 1887-90 at
expense of first Duke of Westminster, depicting ecclesiastic
historic events in Chester; east window 1863 by Clayton and
Bell at expense of Meadows Frost, depicting Biblical scenes,
to commemorate marriage of Edward Prince of Wales; memorial
windows in nave aisles include, north-east, 1901 by Shrigley
and Scott at expense of Chester master builders commemorating
the architect TM Lockwood, depicting Hiram, builder of the
Temple at Jerusalem.
FITTINGS: small red sandstone font, probably C17 re-discovered
C19; C19 pulpit; reredos 1876 by Douglas, made by Morris and
Co, with painting of Last Supper by Heaton, Butler and Bayne;
Lady chapel reredos in timber, Baroque, now 2-panel, formerly
wider, 1692; organ used at Queen Victoria's wedding then
brought to Chester, rebuilt 1901, in case by TM Lockwood 1895;
gates to Lady chapel C17, altered; aluminium figure of the
Virgin 1969 by Michael Murray; mace board listing mayors of
Chester 1529-1848.
MONUMENTS: include: to Diana Warburton 1693 by Edward Pearce,
with sculpted skeleton; Cecil Warburton 1729 with bust in
relief; effigies on floor of north aisle, Agnes de Ridlegh