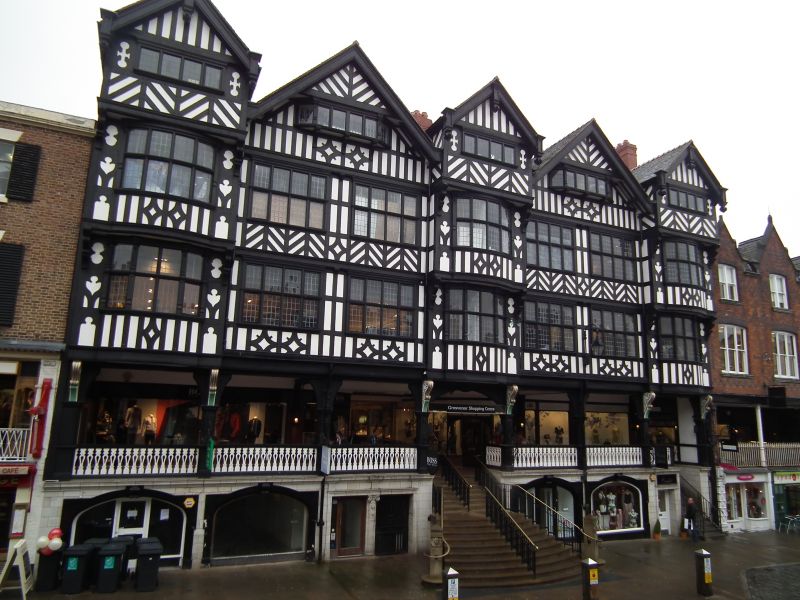 Includes: Nos.1-18 (consec) and No.20 ST MICHAEL'S ROW.
2 undercroft shops, 2 Row shops and 20 arcade shops. 1909-11.
By WT Lockwood. For the second Duke of Westminster. Faience
and timber framing with plaster panels, brick and probably,
steel frame; Westmorland green slate roof.
EXTERIOR: 5 tall storeys; 5 gables to Bridge Street;
expressed, above the Row arcade, as a symmetrical E-shaped
late Elizabethan house.
The faience undercroft has a broad central flight of 13 stone
steps with wrought-iron rails to the Row and arcade, with,
north, an ornate wrought-iron gate to the service basement and
a shop doorway, both in a trabeated case with a composite
central column and an entablature; next, 2 modern shopfronts
in basket archways; south of the stair 2 modern shopfronts in
basket archways, then a part-glazed door in a case with
architrave and entablature and a flight of 12 stone steps with
wrought-iron rails to the Row. A faience cornice beneath
timber-clad end-piers and 4 cross-shaped intermediate posts
and timber rails on shaped splat balusters to the Row front;
the almost level stallboards and the Row walk are paved in
terrazzo; shopfronts to each side of the arcade have recessed
doors in basket arches with Art Nouveau carvings in spandrels;
panelled plaster ceiling to Row; a basket arch with timber
triple "keystone" above the central stair; the bays to each
side have bressumers on shaped brackets; carved consoles on
the post-fronts support the third-storey jetty.
The upper storeys are small-framed, jettied at each storey,
the central and end bays boldly and the double-width
intermediate bays mildly. Moulded fascia to bressumer; the
central and end bays have a shallow canted 4-light mullioned
and transomed oriel to each of the third and fourth storeys,
with shaped central and side panels; the intermediate bays
have pairs of mullioned and transomed 4-light casements, with
quadrant braces to the third storey and herringbone braces to
the fourth storey. The fifth storey has a 4-light mullioned
casement with herringbone struts and shaped panels to the

central and end bays and canted 6-light oriels with close
studding and quadrant braces to the intermediate bays; the
central and end gables have close studding, the 2 intermediate
gables herringbone struts; moulded bargeboards; the verges of
the intermediate gables, with rafters exposed, project to the
face of the central and intermediate gables; each of the
latter has 3 drop finials; lateral chimneys; brick rear walls.
Oriels and casements are leaded; mullions at angles of oriels
form pilasters.
The Row shops return to a pilastered segmental archway with
"figurehead" corbels, one a female, the other a bearded male,
at the entrance to the arcade; the floor is terrazzo, the
walls cream faience, banded in mauve; composite pilasters on
tall plinths between shopfronts with tiled stall-risers and
oak frames; cornice; Atlantes between shops at upper storey;
richly moulded frieze; glazed roof; The wider central part of
the arcade is entered at each end through great round arches;
the adjacent shopfronts are canted to open onto small
side-arches; each end of the glazed roof over the front and
central part of the arcade is hipped; at the far end the roof
is gabled and the frieze below more sharply moulded,
suggesting that it was first intended to extend the arcade,
not achieved until the 1960s.
Lockwood intended that this large and ambitious project should
be wholly faced in faience; but his client, to whom the City
Council's Improvement Committee expressed their pleasure and
thanks, demurred, insisting on timber framing.
(The Buildings of England: Pevsner N and Hubbard E: Chester:
Harmondsworth: 1971-: 166).